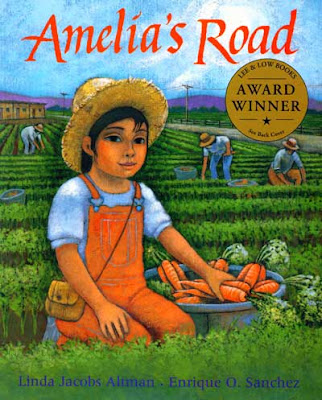 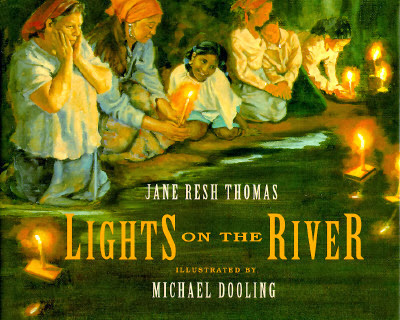 Since 1960, the terrible conditions of migrant agricultural workers in this country have been public knowledge.[1] Today, hundreds of thousands of children in the US work in agriculture[2] and, since César Chávez and Dolores Huerta founded the United Farm Workers in 1962, the organization has exposed and campaigned against the dangers of agricultural labor, particularly to child workers.

It’s not required for a picture book about a tough subject to overwhelm young readers. But children are capable of complex thinking, and empathy comes from understanding one’s own life and the lives and struggles of others. There are wonderful picture books, for instance, about the struggles of agricultural workers for human rights.[3] It can be done.

The story of families who are migrant farm workers is the focus of two children’s picture books, both published in the early 1990s. But Amelia’s Road and Lights on the River are very different from each other in the ways that each author relates the issues. One encourages empathy and discussion; the other encourages only pity.

Every time Amelia Luisa Martinez’s father picks up a map, it means the family has to move again, to follow the ripening crops. The child longs for a place she can call home, where the teacher knows her name, where she has friends, where her family doesn’t have to “mark all the important occasions of life by the never-ending rhythms of harvest.” One day after her morning’s work, Amelia hurries off to school. Here, she meets Mrs. Ramos, who introduces her to the other children and, when Amelia draws a picture of a house with a large tree in the yard, gives her a red star. When Amelia takes a different road back from school, she sees a large tree just like the one she has drawn, and feels connected to this tree and this place. Although Amelia and her family have to move on, she gives the tree a gift that ensures that she will return. Amelia has set down roots; for now, this is her road, this is her place. Sanchez’s acrylic-on-canvas paintings, on a palette of rich, bright, colors, show a loving family, working hard and being together. Amelia’s Road will resonate with young readers, especially those who work in the fields. Highly recommended.

In Lights on the River, young Teresa doesn’t work and doesn’t go to school—her only job is to take care of the younger children while her family toils among the cucumber vines nearby. Here, under a shade tree, she cuddles her doll and dreams of the happy times, spending Christmas Eve with her grandmother in “Mexico, far away,” where there is family, music and plenty to eat. Moving from camp to camp, Teresa and her family are alternately exhausted, sad, miserable, humiliated, enraged, and resigned to their pitiful existence. “We carry our house on our backs,” Teresa’s mother sighs.

At one farm, Teresa’s family is forced to live in a chicken coop with two dirty mattresses, an outside pump and a filthy outhouse. When she accepts a chocolate-chip cookie from the “woman farmer” and sees the contrast between her life and that of the farmer’s family, “her throat was so full of anger that the cookie stuck.” For Teresa, this contrast drives home the hopelessness of the Mexican family’s lives, and fuels both her mother’s silent rage and Teresa’s impossible dreams.

Papi and Gabriel had planted an orchard of their own. Mami ran a café with screened doors and curtains at the windows, where Teresa served beans and chicken and chocolate-chip cookies….Nobody’s stomach growled with hunger. And every night Teresa rested in Abuela’s dooryard with the people she loved, listening to Papi’s guitar.

As Teresa’s mother lights the luminaria candle, a present from her grandmother—“Abuela gave us the sand and the light to keep the village alive in our hearts,” Teresa “listened to Papi’s song as Mami pulled her into her lap, the place that was always home.”

In stark contrast to Sanchez’s artwork in Amelia’s Road, Dooling’s dreary oil paintings, on a palette of mostly dark browns and greens, complement the dreary text of Lights on the River.

Thomas’ writing is superficial and trite, and full of cultural errors. According to her author’s note, she “wrote this story more than forty years after seeing several migrant farm workers standing at the doorstep of the chicken coop where they were housed on a Michigan farm. The people I saw as a child were Mexican.” It wouldn’t be a stretch to opine that the pity she felt as a child remained when she wrote Lights on the River. Mexican children of migrant agricultural workers deserve much more than this. Not recommended.

[1] On the day after Thanksgiving in 1960, “CBS Reports” aired a documentary presented by broadcast journalist Edward R. Murrow. Called “Harvest of Shame,” it brought public attention to the horrible conditions of migrant agricultural workers in the US.

[3] See, for instance, the reviews of César: ¡Sí, Se Puede! Yes, We Can! by Carmen T. Bernier-Grand, Gathering the Sun: An Alphabet in Spanish and English, by Alma Flor Ada and Rosa Zubizarreta, and Harvesting Hope: The Story of César Chávez by Kathleen Krull.