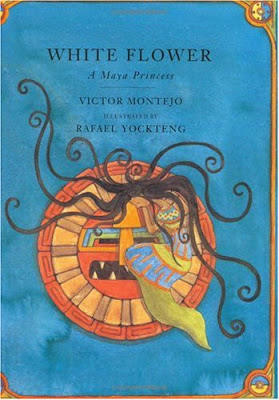 Montejo’s grandmother, who was Jakaltek Maya, told him this Mayan version of the Spanish folktale, Blanca Flor. In this story, which is set in the classic Maya civilization, the father is W’itz Ak’al, the shape-shifting Lord of the Mountains and the Valleys, who rides huge deer and eats the spirits of those who had bargained their hearts for extreme wealth. W’itz Ak’al’s daughter, Saj Haq’b’al (White Flower)—rather than being a wimpy, self-sacrificing “Snow White”—also commands the forces of nature. One day, an impoverished young prince, Witol Balam—who has lost his family, his wealth, and even his memory—wanders into the area, searching for work and shelter. He encounters a kingdom and falls in love with Saj Haq’b’al and, despite all the fierce power that confronts him, takes on a series of impossible tasks in order to marry the strong young woman who makes the impossible possible while ameliorating her father’s wrath.

Yockteng’s softened watercolor and graphite pencil illustrations reflect both the detailed Maya symbols and patterns in the great city, and the flora and fauna of the lush, endless jungles. Here is Saj Haq’b’al, giving her voice to an ear of corn, transforming herself into a thorn hedge, and turning into a deep blue lake. Here is the pursuing queen, riding into an endless magical cornfield, futilely searching for the one ear she knows to be Saj Haq’b’al. Here is a seven-pointed ribbon becoming a path with seven branches to confound W’itz Ak’al in his pursuit of the bold fugitive couple.

Of course, we always knew the story would end well—the marriage party “lasted many days and the musicians played age-old songs on their marimbas, so that the people of the city could dance and forget all their sorrows.” Don’t let the length of the narrative stop you—White Flower is a well-told and beautifully illustrated story full of magic and magical realism that young readers will love. Highly recommended.