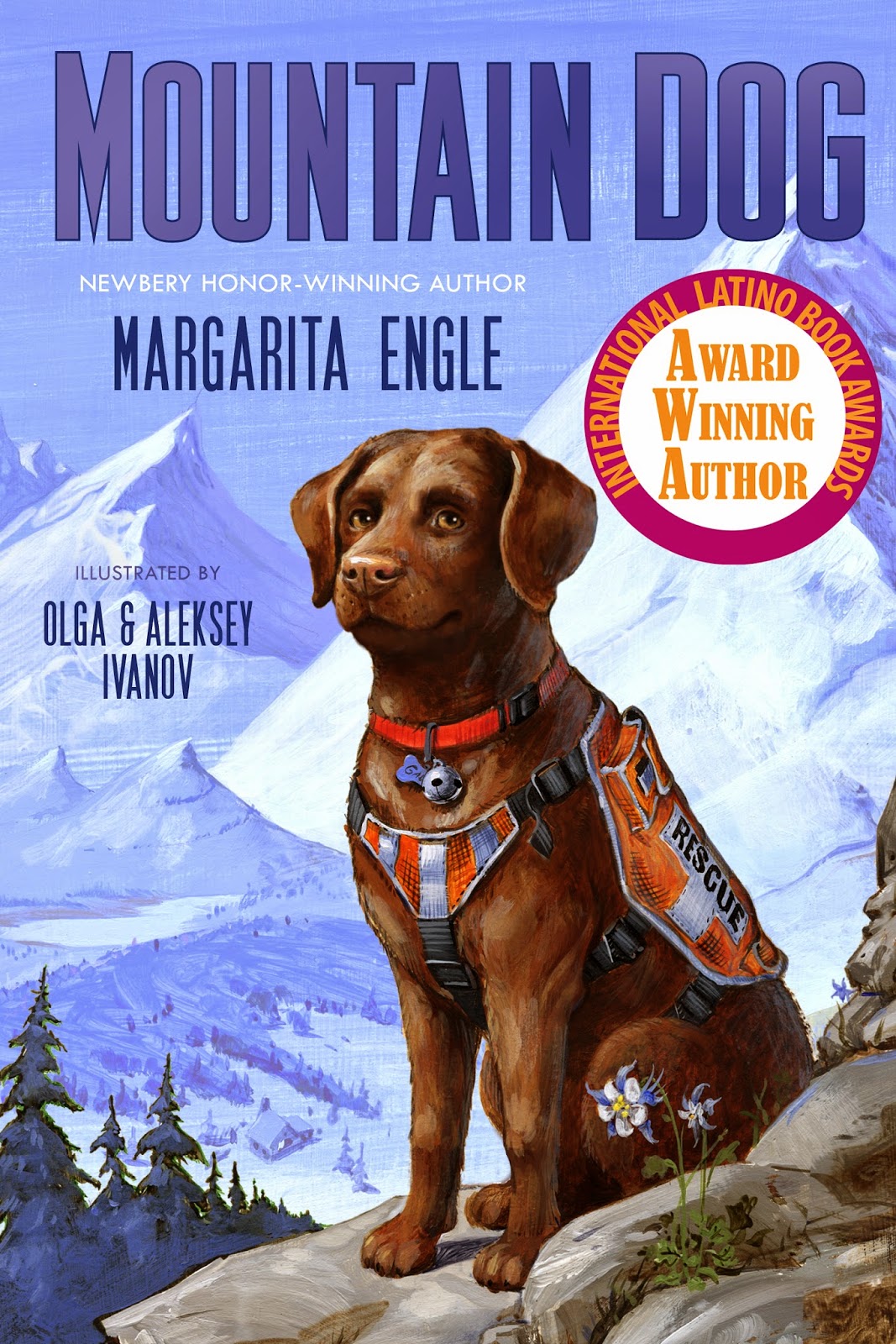 In Engle’s elegant free verse, Mountain Dog relates the story of 11-year-old Tony, whose mother is imprisoned for running a dog-fighting ring in Los Angeles; and his partnership with his Tío, a forest ranger in the Sierra Nevada, with whom he is sent to live; and with Gabe, Tío’s search-and-rescue dog. In alternating narratives by Tony (“the boy”) and Gabe (“the dog”), young readers see how the boy slowly grows from a confused, distrustful, fearful young person to someone who has learned to deal with conflict, inherited his great-uncle’s passion for rescue—and is beginning to know his path.

In my other life there were pit bulls.
The puppies weren’t born vicious,
but Mom taught them how to bite,
turning meanness into money,
until she got caught.

As he deals with his sadness, Tony’s suffering is palpable, but as Tío Leonilo and Gabe welcome him into their lives, the healing process begins. Here, Tony learns how to navigate the wilderness:

I learn how to estimate
the temperature of soil
at a 6-inch depth
by counting beats
per minute
in the song
of a cricket.
Fast insect music
means the earth is warm.
Slow bug songs come only
On long, cold cricket nights.

And Gabe, in his dog way, learns about Tony:

My nose has wishful moods
when the nostrils imagine sniffing
adventure smells that I can’t quite name
with my dog words.

Tony, you look wishful too.
Does your boy nose dream
of exploring wild scent trails
in unknown air?

On many levels, Mountain Dog is a story about a boy’s recovering from the traumas of child abuse and learning to trust again, about discovery, about making life-affirming choices and finding his path. And in this, it succeeds, beautifully. As well, Engle has a plethora of details—about wildlife and wilderness, about physical survival in a harsh environment, about selecting a puppy and training a search-and-rescue dog, and about the absolute necessity of mastering mathematical calculations—seamlessly woven into this emotion-filled story of a boy’s coming to terms with his past life and opening himself to the possibilities of moving forward.

Olga and Alexsey Ivanov’s black-and-white, pen-and-ink illustrations are appealing and evocative. Some are simply rendered and, where needed, hatchlines add detail and perspective to humans, domestic and wild animals, and the wilderness. On the frontispiece (repeated on an interior page), for instance, we see Gabe’s head leaning into Tony’s left hand, while Tony’s body, drawn in far less detail, faces the other direction. It’s clear that Tony is barely allowing Gabe to make contact—and Gabe is doing what he’s been trained to do, being there, being available, waiting to see what more is required of him. Opposite the first page of text, we see Tony, looking almost directly at the reader. His large eyes are mistrusting—he’s been through a lot—and he’s thinking, as the chapter title says, “no no no maybe.” The book’s final illustration is of Tony’s new puppy, whom Tony will train to be a rescue dog. The puppy’s eyes are also large—open to all the possibilities that await him with his new family.

My one problem with Mountain Dog is Tío’s brief story of his childhood and early teenage years in revolutionary Cuba (“the troubled island”): “Strange rules. Censored books./ Rationed food. Secret police./ Neighborhood spies”; his escape from the secret police on a homemade raft during hurricane season, and his subsequent rescue at sea by a fisherman.

In truth, the Cuban people had to protect their revolution and defend their tiny country to the death—to prevent CIA-funded counterrevolutionaries, giant US corporations, and organized crime, from taking back the island. At the beginning, life was very difficult and people fled because of the US embargo, which strangled the Cuban economy and caused serious shortages and the rationing of food. As some say today, “teníamos hambre”—“we were hungry.” But, absent any historical context, Tío’s story will lead young readers to think of Cuba as a regimented, controlled country that oppresses its people.

To lend balance and encourage discussion, teachers and librarians might supplement this section of Mountain Dog with George Ancona’s beautiful photo-essay, Cuban Kids (Cavendish, 2000), which gives an honest picture of life on the island. “Despite the hardships, the shortages, and the embargo,” Ancona writes, “Cuban kids are growing up with a love of their country, traditions, and culture. Their many skills will contribute to making a better future for Cuba and the world.”