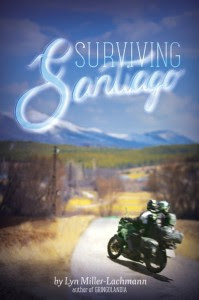 Surviving Santiago, Miller-Lachmann’s companion-sequel to Gringolandia, takes place in 1989, in the waning days of the US-sponsored Pinochet dictatorship in Chile, after the plebiscite that removed him from power, and before he actually stepped down. It’s told from the POV of 16-year-old Cristina Isabel Aguilar Fuentes, known in her adopted country and by her friends as “Tina Aguilar.”

Tina’s mom—who, in Gringolandia, had relocated with her family to Wisconsin, and now is divorced from Marcelo and remarried—has sent her to live with her papá for the summer; and returning to her homeland is the last thing Tina wants to do. It’s a strange place, Santiago de Chile, not a place she remembers, and not a father she remembers. Marcelo, a revolutionary who had been tortured by the regime, has come out scarred, inside and out. He is addicted to alcohol and when he drinks, he becomes violent and abusive. Papá had wanted Tina to spend the summer with him, but when she arrives, she finds she’s on her own.

Throughout, Miller-Lachmann paints a complex and realistic picture of what torture under the dictatorship did to individuals and families—in this case, post-traumatic stress causes Papá to lash out at those he once loved. Tina soon sees how he dehumanizes Tía Ileana—who is lesbian and the only person who takes care of him. Tina remembers her papá from childhood—how he would drive the children to school, how they would go to the beach, how they would play cards together. But now, she abhors that he has become, as she spits out, “a bigot and a jerk.”

Indeed, Marcelo is a broken person, yet he never drinks at work, because this work is too important to screw up. His friend and colleague, Ernesto, adores him. “We worship him, Ernesto says. “He taught us everything we know about investigative journalism.” “During the plebiscite,” he tells Tina, “he was on the air for thirty-five hours straight. Said he couldn’t sleep until he knew the bastard was going down so he might as well work, but I’m sure it’s an on-air record.”

As in Gringolandia, there’s a metaphor here that’s not really a metaphor: Papá has rescued two parrots who had been abused by a bird torturer; one was un desplumado who eventually grew back his feathers, and the other has chewed off part of his foot. What will happen to Papá as a result of the torture he suffered at the hands of the Pinochet regime? Will he heal or will he remain physically and emotionally broken?

When an attractive, motorcycle-riding dude—a delivery boy—arrives on the scene, something is not right. Although Tina and Frankie share a love of Metallica and both are dealing with fathers who have alcoholism, Frankie’s extreme right-wing views of the regime and Chile’s history and world events—such as how “Franco stopped the Communists” in the Spanish Civil War—are the opposite of what Tina knows to be true. And they’re the opposite of all that her papá has fought and suffered for. Still, Tina sees Frankie in a way that only a love-struck teenager can: she senses, yet ignores, the oncoming danger. This is Chile, after all, and Augusto Pinochet is still in control. The military police and the regime’s hired guns are still “disappearing” people. In this tense, dangerous scenario, what’s Frankie’s role? Who is he, really?

As the tension builds and careens to a satisfying conclusion, everyday people try to survive and families continue to search for the bodies of their “disappeared” relatives, those who had been imprisoned and tortured struggle to become whole again, and Pinochet and his thugs do their best to see that his fascist legacy continues. This is 16-year-old Tina’s narrative—usually on-point, sometimes naïve, but every word believable.

Where appropriate in narration or dialogue, Miller-Lachmann uses idiomatic Chilean Spanish, and seamlessly inserts English interpretations (some of which will be a hoot for Spanish-speakers):

The moment I set Pablo down, he fluffs his tail and takes a dump on the counter. Tía Ileana yells at me. She hasn’t yelled at me since I got here, but I guess I’d yell too if a bird pooped where I sort of cooked.

“It’s okay. I’m not going to hurt you,” I murmur, stroking his head.

He keeps screeching, “Just shoot me,” in Spanish….

When the parrot quiets, I say, “Hello. How are you?”

“¡Alfonso, conch’e tu madre!” the parrot squawks at me.

I don’t reward him for calling someone named Alfonso his mother’s private parts. Instead, I repeat, “Hello. How are you?”

Like Gringolandia, Miller-Lachmann’s latest effort is one I’ve read several times and I’ve wanted to quote from practically every page. It’s that good. And, like Gringolandia, Surviving Santiago is an important historical novel, and is highly recommended.