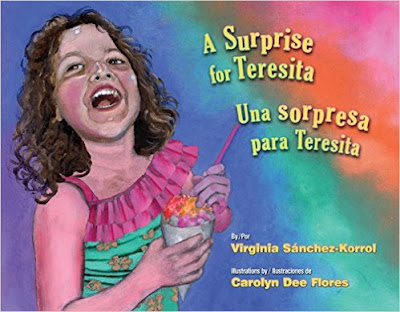 On the cover is a Nuyorican child named Teresita. Her head is slightly thrown back and she is laughing. Her laugh is so big that young readers can see the mixture of both primary and permanent teeth. Her outfit is a rainbow. The piragua in her hands is a rainbow. The background is a rainbow. And—Teresita is a rainbow.

Today is Teresita’s seventh birthday. She’s a big girl now—she can dress herself, help her mamá water the plants on the fire escape, lead her friends in “Red light, green light, 1, 2, 3,” and be trusted to stay in front of their building. But as the day goes on and she watches for Tío Ramón, she begins to worry that the barrio’s beloved vendedor de piraguas has forgotten her birthday surprise. (Young readers may intuit that Mamá knows what surprise Tío Ramón has for Teresita, but no one’s letting on.)

Flores’ intense, textured art—deep, rich oils on raw cardboard with an overlay of Liquin—is perfect. Her technique, she told me, is painstaking and time-consuming.

“I add one drop of paint directly from the tube,” she said, “and dip my brush into Liquin, mixing my colors right on the canvas. After each drop, I clean my brush, and start all over again.” The Liquin, she said, is a blender that also acts as a dryer. So, while the oil seeps into the cardboard and can take months to dry, the surface dries relatively quickly.

It’s the representation of these joyous and exuberant young Nuyorican children of the rainbow—and the neighborhood that their families have transformed into a “tropical island” whose colors are superimposed on the brick, stonework and facing of 19th Century brownstones—that appears to have fired Flores’s imagination and her bright palette of piragua colors that illuminates this sweet story.

A word about illustrating skin tones: Most of the time, the perceived darkness or lightness of our skin is determined by whether we’re in the shade or in the light. In addition, the insides of our arms and hands, for instance, are lighter than the outsides. Flores beautifully captures this phenomenon in the children and adults here, especially with Tío Ramón, who—since he moves around a lot in this story—appears darker on some pages and lighter on others. I don’t know any other children’s book illustrator who consistently reflects this kind of reality.

Baeza’s colloquial Puerto Rican Spanish translation is rhythmic and appealing. She uses, for instance, “jugo de china” rather than “jugo de naranja” for orange juice because, in Puerto Rico and Santo Domingo, oranges are called “chinas.” And hablantes will enjoy hanging out with Teresita and her friends as they jump “la doble soga” and “agua sube—agua baja” (“Double Dutch” and “High water—Low water"). Baeza also used a single term in English followed by the Spanish—“Teresita…fue a la ventana que abría el fire escape o salida de incendio”—to introduce a concept that a lot of kids might not fully understand.

She told me that when she works on translation, she takes care to create something that sounds natural to native speakers. For example, she said, certain grammatical constructions in English may not have corresponding structures in Spanish, so when they are translated word for word or even phrase for phrase, the result sounds awkward in Spanish. She said that her translation and editing process always includes reading the text out loud to herself and a translation committee, and working closely with the author to select the terms that best respect the characters and communities portrayed in the books.

To me, when Baeza translates, she centers hablantes who are reading the Spanish version. This is different and more effective—for both Spanish and English readers—than translating for English readers only, which is more often the case in “bilingual” children’s books.

Unlike too many other “multicultural” stories for children, readers here will not find any belabored expositions of language, food or music. Rather, author, illustrator and translator have seamlessly woven together the elements of a warm story of family, friends and community, where Nuyorican children of the rainbow find joy in each other’s company and little things—like hugs from loving parents, like running through the spray of an opened fire hydrant in the summertime, like jumping rope with friends, like waiting for the piraguas vendor and choosing which color and flavor of ice cone to buy—and where a child’s only worry is what will be her birthday surprise. (Spoiler Alert: It’s alive, it’s very cute, it has a green-and-white collar just like Tío Ramón’s piraguas cart, and its name is Piragua.)

Teresita is a real little girl in this sweet little story with excellent Spanish translation and luminous art; and everything about it is real. A Surprise for Teresita / Una sorpresa para Teresita is highly recommended.