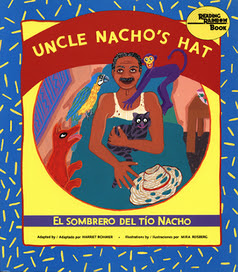 I have an old, dirty tan shirt with two gray-and-white dolphins painted on it from the San Diego Zoo. I’ve had it for a long time, won’t part with it even though it’s too stained and too small for me to wear. I think Uncle Nacho in Uncle Nacho’s Hat / El sombrero del Tío Nacho feels the same way about his hat, which is old and filled with holes.

When his niece gives him a new hat, Uncle Nacho tries to find a use for his old one or a decent person to give it to; but, somehow, that hat keeps coming back. Finally, when he stops worrying, a simple solution occurs.

I like the brightly colored, outlined illustrations, and I like the fact that the book is bilingual. Children who speak Spanish or English can enjoy the story in their own language. Perhaps they can learn each other’s language, too.

I think this book is especially good for people who never seem to be able to get rid of things or break old habits. Uncle Nacho’s Hat / El sombrero del Tío Nacho is highly recommended.

Editor’s note: My son, Carlos, wrote this review in 1989, when he was 11 and in the sixth grade. It was originally published in the New York Times Book Review. We both still like this book a lot.