The Smell of Old Lady Perfume 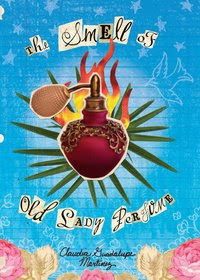 By the time I actually started sixth grade, I felt like a burro—a donkey, which was what they called the kids who weren’t too smart. We had missed a little more than a week of school. Nothing was like it was supposed to be. I wasn’t sure how to explain it, except that I felt very small. (p. 66)

As Chela Gonzalez eagerly prepares to enter sixth grade, her strong father—the center of her universe—has had a stroke and her maternal grandmother comes to stay to help take care of the family. She brings with her, among other things, “the smell of old lady perfume.” As Chela’s father has to make major life adjustments in order to recuperate, her mother has to secure employment to support the family. Her having married young and never having had a job before presents a great challenge for the entire family. Because of her father’s illness, Chela is unable to begin school with the rest of her classmates, and her vision of a perfect new school year is quickly thwarted when she finds herself isolated and shunned by the popular girls. Chela does not have any friends, her teacher completely forgets about her, and she cannot even tell her father about it for fear that the stress might make him ill again. Although Chela’s father’s health seems to improve and he is able to build the family a home of their own, soon after they move he has another stroke, this one fatal. And the smell of old lady perfume once again returns to the Gonzalez home.

Martínez’s debut young adult novel captures the turmoil of a family’s losing its center, and at the same time emphasizes the importance of staying in school. Chela’s parents are immigrants and her father makes clear that his options are limited because he had been unable to go to school, so he wants his children to take advantage of every opportunity. Chela, of course, is an exceptional student and is even in the gifted and talented students program. Education has become central in the Gonzalez family’s life, and being recognized as the smartest girl in school becomes Chela’s main goal.

The relationship between migration/immigration and education is a significant theme within Latina/o children’s and young adult literature. Stories like Gloria Velasquez’s Juanita Fights the School Board (Arte Público Press, 1994), Luis Rodriguez’s América is Her Name (Curbstone Books, 1998,  http://decoloresreviews.blogspot.com/2013/04/america-is-her-name.html), and Jorge Argueta’s Moony Luna / Luna, Lunita, Lunera (Children’s Book Press / Lee & Low, 2005, 2013) capture various struggles that Latina/o children face in school and the role that their parents play in helping students overcome these challenges. Here, Martínez also highlights the parents’ desire to see their children succeed and how education can be a means for many immigrant families to secure that success.

The Smell of Old Lady Perfume also presents an opportunity for a classroom discussion of how traditional gender roles within Latina/o families impact children and may reveal ways to reconcile or challenge them. Chela’s father’s death shakes her family’s structure because her mom now must secure employment in order for the family to survive, leaving older children with the responsibility of caring for the younger siblings. The reality, which Chela explains, is that they have to take care of themselves. With the father now gone, the boys in the family are told that they must now act as the heads of the family and are forced to hide their emotions.

In The Smell of Old Lady Perfume, Martínez has created an honest and endearing character through Chela Gonzalez. By the end of the story, the school has recognized Chela’s hard work and her family is there to support her. This young Latina has reaped the benefits of education; and despite having lost her father, she shows great strength and determination to succeed—something her father had encouraged and of which he would have been proud.

Towards the end of the story, Chela visits with her father in the cemetery because she wants to share some news:

I know you would’ve been there if you could’ve. I still wanted you to know, so I came to the cemetery and put down my thirsty roots…. Don’t tease me and make me laugh. I just want to lay here and listen for your heartbeat….We were so happy. Now I’m sad when I’m sad, and sometimes I’m sad when I’m happy. I close my eyes, and you are exactly as you were. I can hear your voice. “Cuando me muera no quiero que me lloren.” (p. 248)

Chela and her father had had a strong relationship, and her great personal loss and the obstacles in dealing with a death in the family will resonate with young adult readers. The Smell of Old Lady Perfume is highly recommended.

(Note: The publisher has informed us that a Spanish edition will be available by the end of this year.)