Camino a casa // Walk with Me 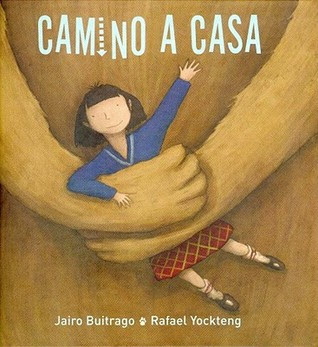 The cover of the Spanish version, Camino a casa, depicts a little girl who’s being held in the safety of whom we soon learn is a lion. The English version, Walk with Me, shows her offering a flower to the lion, who is sitting on a grassy knoll near a pedestal on which is engraved, “1948.” And girl, lion, and pedestal appear on the first full-bleed spread of both versions as well.

The little girl asks her lion-friend to protect her from “falling asleep” as she navigates her dangerous, dilapidated city, picking up her baby brother from child care, shopping for groceries from the tienda whose owner refuses credit, arriving home to cook dinner, and waiting until her mamá returns from her job at the factory. Finally, the girl gives her lion-friend-protector permission to “go up back into the hills again,” but to be sure to return when she needs him.

Throughout, we see people falling asleep where they stand or lie down. The few adults who aren’t falling asleep are just staring blankly at the lion. And one appears to be dead. Only the children seem to be interested as they exit a school that resembles a prison (with a uniformed guard at the gate). In fact, there appear to be bars everywhere: on the school doors, on buses, even on the windows of the broken-down apartment houses. 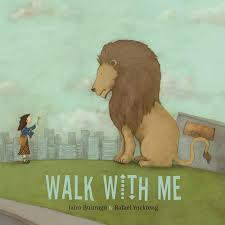 Many of the people in the city are impoverished and shabbily dressed, as is the little girl. A car passes by a man who’s digging through garbage cans. A man wearing a suit ignores a homeless man who’s leaning against a building with his hand out. A child looks out the window while a woman and her child walk up the hill, carrying everything they own on their backs. People pass by an elderly woman who’s dropped her bags of groceries, but no one offers to help. Indeed, complacency to the political and economic climate has put almost everyone to sleep.

In 1948—the year carved into the pedestal—Liberal Party leader and Presidential frontrunner, Jorge Eliécer was assassinated in an operation widely believed to have been orchestrated by the then newly created US CIA. His murder provoked a riot in Bogotá (known as "El Bogotazo") which, between right-wing and progressive forces, almost completely destroyed Colombia’s capital city, claiming some 200,000 lives. Throughout the country, the more than ten-year epoch of violence became known simply as “La Violencia,” during which many more thousands were killed or disappeared over the years. In 1953, Colombia’s commander-in-chief, Gustavo Rojas Pinella, seized power in a US militarily and financially supported coup and ruled as dictator until 1954, when he was declared President. Today, under many guises, US support for “friendly” right-wing forces throughout Latin America continues to be well-known.

But the lion—the little girl’s protector—appears to be making things happen. As he passes by with the child on his back, people wake up and notice. There’s a car crash but no one is hurt. A young man has pasted a revolutionary poster on a telephone pole and is making a “peace” sign at bus passengers, who are all looking at him and the lion. A woman turns around to wave at the lion. People are looking out of the windows of the neighborhood buildings. A roar from the lion convinces the scared-to-death tienda owner to extend credit. Maybe, just maybe, people are beginning to wake up.

After dinner, with four bowls set out for the three humans and the lion, the girl knows that it’s time to send the lion back into the hills if he wants to go. She knows that he has more work to do.

On the next to the last page, as her little brother and their mother are asleep, the girl places her flower beside a framed family photo. It’s the same flower she has offered to the lion on the cover of the English edition and the first page of both Spanish and English versions. Next to the bed is a chair that holds an empty book bag and beside the chair is a pair of large boots. They are the same boots whose prints we see on the back endpapers. On the floor behind the chair is a stack of newspapers. On the last spread is a closeup of the stack of newspapers, with its headline now visible: “FAMILIAS DE DESAPARECIDOS DE 1985.” Under the headline is a photo of a man giving a statement to the media during a demand for information about all those whom the Colombian government has disappeared. And on the night table is a closeup of a framed photo that depicts happier times together: mother, father, baby and little girl are smiling, and the little girl is holding out her fingers in a “peace” sign. The father has a mane of curly hair—just like the lion who has walked with and guarded the little girl throughout the story.

Yockteng sketched his illustrations—all on full-bleed spreads—in pencil and then digitally redrew and colored them. On a muted and somber palette of mostly grays, greens, blues, and browns, the only standouts are the girl and the lion—and the one spread that shows the grocer frantically pushing two bags full of groceries to the girl whose lion, in a full roar, exhibits all his teeth. And, as always, Amado’s English translation is excellent.

Together with Rafael Yockteng, Jairo Buitrago, who is Colombian, have written picture books for young children, including Dos conejos blancos // Two White Rabbits, that describe people’s hardships and struggles to survive the economic and political realities throughout Latin America and here in the US. As with Camino a casa // Walk with Me, they appear as quiet stories and are full of symbolism for young children and their teachers to discern and discuss in a non-threatening way—and to support those children who have their own stories to tell.

Throughout Latin America—most notably, Argentina, Chile, Colombia, Guatemala, Honduras, Mexico, Peru, and El Salvador—families of the disappeared and murdered are still holding vigils and protests and demands for information. In some of these countries, unmarked graves have been uncovered and victims identified and, with love, reburied. And in some cases (such as Chile), perpetrators have been tried and imprisoned. Nevertheless, families of the disappeared have kept up the pressure. It is to keep alive the memories of the disappeared, the activism and sorrow of their families, and their prayers for reunification (one way or another)—that Camino a Casa // Walk with Me holds so much hope. These lovely, poignant, compassionate books are highly, highly recommended.

(Note: "El Bogotazo" was not the name of the Liberal Party leader, Jorge Eliécer Gaitán; it was the name of the riots that followed his assassination. I made this correction above. Thank you, Lyn Miller-Lachmann; good catch!)