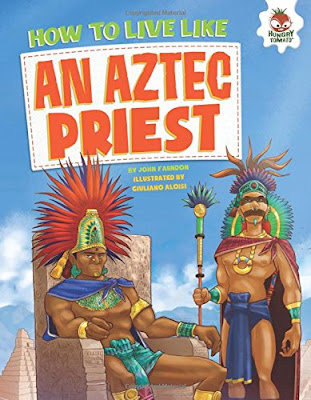 According to the back jacket and publisher information, Hungry Tomato’s “How to Live Like” series for young people includes:

All of the “narrators” of these titles are young boys in training, from “long ago and far away,” to become respected members of their societies or social groups. All of these “narrators” are speaking to contemporary kids (presumed to be boys), to show them what life was like in historical times. The unstated but strong assumption in this series is that girls and women were unimportant in historical times and, by extension, unimportant today.

Following Ten Vulture (who was “born on the tenth day of the Vulture month”), from the time his parents offer him to the calmecac until he becomes a full-fledged priest in the service of Moctezuma II, How to Live Like an Aztec Priest situates the Aztec nation in 1518 (where it begins and ends), at the nexus of Spanish colonialism, one year before Hernán Cortés marched on Tenochtitlán. Written so the reader can “learn” alongside Ten Vulture, this title reveals its racism early and often, beginning with this: “Aztecs…(are) harder and bloodier than anyone else”—and continues in this well-worn narrative. It proves its tagline that the reader will need “a courageous heart and a strong stomach.” By focusing on a single story—the violent culture of the Aztec peoples—the author and illustrator cast the ancient Aztecs as mindless savages. Not only is this depiction a tired stereotypical trope, it also capitalizes on long-standing anxieties about violent Indigenous populations.

The cover illustration makes it immediately evident that neither author nor illustrator have any regard for accurately portraying historic, Mesoamerican Indigenous populations. Rather, depicting Moctezuma with Ten Vulture by his side, it’s a study in racist caricaturization. From the facial structure of the characters—those noses! And the cleft chins!—to the hyper-masculine idealized bodies that are all chest and biceps, to the monochromatic brown skin, the cover and the illustrations throughout rely on stereotypes and paint a problematic image of the “Aztec” peoples. (And let’s not forget the girls and women, who are all depicted as thin, and all—except for grandma—have cute little pug noses.)

It’s difficult to decide some of the most glaring racist tenets, but here are a few:

• The Aztecs are brutish, strong, and terrifying: “Our great task is to sacrifice to the gods…Soldiers will lead the sacrifices up the steps to us and we will throw each one across the alter. The high priest will plunge in the stone knife, slice out the heart, and hold it up to the gods in offering. The steps turn red with blood.”

• And disgusting: “After the sacrifice has been killed, each part of the body is removed and sent to its correct destination: The head is placed on the skull rack. The heart is kept in a special jar, called a chac-mool. The blood is poured down the temple stairs. The guts are fed to the animals. The limbs may go to the warrior who captured the person, to cook and eat in a holy meal.”

• And besides the gruesome details (told in modern language, such as “getting the point” in a description of being jabbed with maguey cactus spikes), there are passages that are majorly undecipherable: “We learn some of our lessons from books. They’re written mostly on paper made from tree bark and they fold into pleats like an accordian [sic]. The writing is in painted pictures, not words. The Spanish later called this kind of book a codex.” (“Accordions” were not part of Aztec culture. Painted pictures are words. And how would this young narrator know how the Spanish people later referred to these books?)

• And yet, they are succinctly wiped out (presumably without spilling any blood) in one easy-to-miss paragraph: “Moctezuma II was our last ruler! In 1519, just a year after I stood by him in my glory [readers are forgiven for not knowing what this means], the Spanish soldiers came. The killed Moctezuma and destroyed Tenochtitlan and our entire way of life.”

• There are two short mentions of girls (along with exclamation points that belie the description): “Girls made spit beer from balls of corn they chewed and spat out. It was considered delicious!” And, “One of their favorite foods was cakes made from the green scum (an algae called spirulina) on ponds. It was considered very nutritious!”

There’s so much more. We’ll spare you.

If the author’s goal was to reveal how Aztec priests lived, why does the culmination of the story focus on being colonized? The genocide of Indigenous populations is a painful and unnecessary chapter in our history and to rehash it in this supposedly “instructional” text feels like salt in the wound.

How to Live Like an Aztec Priest is also rife with historical and cultural inaccuracies. It purports that the Aztec people were completely apart from Totltec, Mayan, or other Mesoamerican societies; but the boundaries between Mesoamericans were fluid as power shifted between peoples. Further, the author posits, again in the “voice” of the young narrator:

Nobody knows where our people, the Mexica, came from. But we arrived here two centuries ago. The local king drove us from the land after we killed his daughter as a sacrifice, so we built our city Tenochtitlan in Lake Texcoco. Then, sixty years ago, we formed an alliance with other kings to create a great empire, with our city at its heart. Aztecs rule, ok?

As a Wikipedia-worthy summary of Aztec history, How to Live Like an Aztec Priest woefully mischaracterizes the various Indigenous peoples who would come to be known collectively as the Aztecs. They were not lost wanderers who magically appeared at Tenochtitlán, but instead a sophisticated amalgamation of smaller Indigenous populations who navigated complex power structures between one another to create and maintain a rich culture that thrived for centuries. In reality, the Aztec peoples were athletes, artists, astronomers, explorers, scientists, writers, and warriors. But here, they appear to be nothing more than, literally, bloodthirsty savages.

Farndon seems to relish the bloodier aspects of the culture, reducing the whole of the Aztec empire to a brutish, violent people with no humanity; and his hyper-masculine focus all but erases women. He describes the various ways Aztec parents physically abused their children, and survived only by carrying out rage filled pillaging raids on neighboring territories—but really gets into it (we imagine him salivating) when it comes to human sacrifice. The number of pages, the detailed illustrations, the specific and multiple ways the human body can be ripped apart is well beyond the scope of a children’s book—or anyone’s, for that matter.

Although text and illustrations imply “interest” and “fun,” what we see is Indigenous children sitting in class, or in the school or community library, or even in their own homes, and seeing themselves represented here. Instead of feeling pride or wonder, they see nothing more than a society—their society—built on blood lust.

Ultimately, How to Live like an Aztec Priest perpetuates horrible stereotypes about Latinxs. We fear that such representation could lead to Latinx readers seeing their heritages as grotesque, or could provide fodder for other readers to see Latinxs as lesser than them. With so much at stake for minoritized children, a title like How to Live Like an Aztec Priest proves that we have so much more work to do to dismantle racism in children’s literature. It’s not recommended.

(Reviewers’ note: Cristina is Chicana and Laura is a lesbian Latina. Both of us are biased against racist depictions of our culture, people, and families. We deeply believe in the need for positive representations of our culture in children’s literature and are furious that a book like this was even published, let alone that it could get into the hands of impressionable readers.)