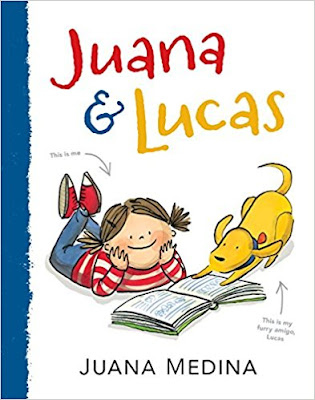 In her almost-breathlessly dramatic narrative, a smart, active, Colombian fourth-grader introduces herself, all the people and places and things important to her, and the issues in her life. Young Juana doesn’t just like things—she LOVES them. She LOVES Brussels sprouts (“more than cheese and chocolate and ice cream”). She LOVES her dog, Lucas (who is her “absolutely-no-single-doubt-about-it best amigo”). She LOVES living in Bogotá, Colombia (the city that’s closest to her heart). She LOVES drawing and reading and playing fútbol—and she LOVES Astroman, who glides from galaxy to galaxy in his shiny, intergalactic suit.

And she has great fun with her very good friend, Juli, because they always have mucho to talk about while Juli shares her most extraordinario and delicioso watermelon gum, blowing bubbles as big as their cabezas—which Seño, the bus driver, definitely doesn’t find entertaining.
But there are also things that Juana STRONGLY DISLIKES. She STRONGLY DISLIKES her uncomfortable PE uniforme, which, like her school uniform, becomes heavy and hot (“like, very hot-celery-soup hot”), and itchy and sweaty and stinky. She STRONGLY DISLIKES accidents, like the tragedia, in which she crushes her favorite kitty-and-rabbit lunchbox and loses her strawberry yogurt, which has explotado. But most of all, Juana STRONGLY DISLIKES surprises. Like when Mr. Tompkins announces that the class is about to have a TON OF FUN:

When a grown-up says something is going to be a ton of fun, it means there will be NO FUN AT ALL. Not even a single bit of fun. Nada de fun.

“My little mischiefs,” he says, “today I’m going to begin teaching you something that will knock your socks off. Prepare for your lives to change…for the better! Today you are going to begin learning the English.”

Julie whispers, “No entiendo nada,” and Juana whispers back that she doesn’t understand a thing, either. Instead of Mr. Tompkins’s promised “ton of fun,” Juana’s first day of school “has become the worst of all first days of schools possible.” 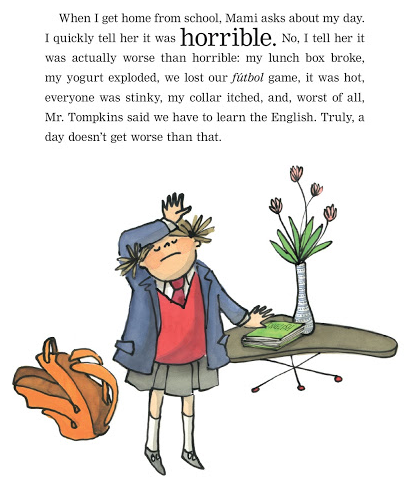 And, in the best practices of “show, don’t tell” (especially in an early chapter book), Medina’s illustrations show young Juana’s family members, friends, neighbors and teachers, as culturally and ethnically diverse; and the mix of colonial Spanish-style edifices and modern apartment buildings, large houses and small bodegas show both a geographic and cultural diversity as well.

While Juana’s narration is not exactly code-switching, Medina judiciously plants some Spanish words and phrases throughout, most of which English readers can easily discern from their contexts. Since the Spanish is clear and italicized for emphasis only, Juana’s story will appeal both to English speakers who want to learn some Spanish, as well as to emerging bilingual hablantes who are learning the relationship between both languages.

Juana asks practically every adult she knows why it’s so important to learn a second language, and particularly one that emphasizes the impossible THs and the long and hard-to-say Ls,  and has so many homonyms:

Why are read and read written the same way but sound different? How can I know when people are talking about eyes or ice when they sound about the same? And what about left hand and left the room? So many words, so little sense.

No single person can give her a convincing answer, but despite Juana’s best efforts to resist learning a second language, the different perspectives of relatives, neighbors and others in the community support Juana in her struggle as she manages to learn the English. And when her Abue promises to take her to Spaceland in the US where, in order to meet her super-idol, Astroman, she must be able to communicate in English, well, that seals the deal: Juana works “muy, muy hard to learn todo the English that (she) can possibly fit into the space between her pigtails.”

Before Mr. Tompkins, Mami, the Sheldons, the Herrera brothers, Tía Cris, and my abuelos can believe it, I am a big and loud fountain of English.

What ensues at Spaceland may not be what Juana had been hoping for, but what she discovers segues into author and illustrator Juana Medina’s own personal story:

Because I can speak English so well, I’ve been able to have fun with a lot of new people and make a lot of new friends. And who wouldn’t like for that to happen all around the world?

The number-two thing I’ve learned is that if I want to travel and make new friends, I will need to learn a gazillion more languages besides English and español!

Juana is a smart, outrageously funny little girl to whom youngsters who speak Spanish, English, or more of one than the other (and other language-learners as well) will easily relate. Juana & Lucas is highly recommended.

Note: Since Juana & Lucas has won a Pure Belpré Prize, I recommend that Candlewick publish a Spanish version as well, with some English words and phrases italicized throughout for hablantes who are learning English. Wouldn’t that be a hoot? And I guarantee it would sell well. ¡Qué good idea! ¿Pués, sí o no?

(Gracias a Candlewick Press for permission to reprint the illustration in the body of this review.)