Lowriders: Blast from the Past 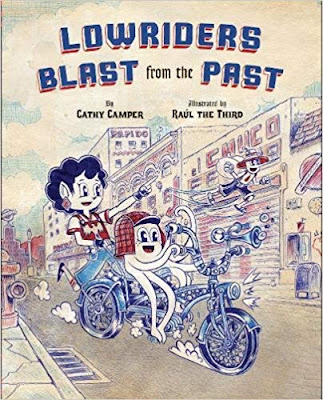 In the entire universe of graphic comics, is there any sillier way to appeal to the sensibilities of young readers than five pages of fart jokes? Than little kid mosquitos, flying through the air, “powered by pedos”? Pretending to be hot-air balloons or hovercrafts or the Hindenburg? With visual sound effects—“BRAPOW!!! PFWAT!!”—and illustrations of farts as little green clouds? And their beleaguered Mamá Malaría, straight out of a telenovela, sobbing her eyes out because her farting kids smell like goats? Probably not.

In their first two installments—Lowriders in Space and Lowriders to the Center of the Earth—the super-talented team of Cathy Camper and Raúl the Third (González) introduce readers to our super-cool interspecies trio: Lupe Impala, ace mechanic extraordinaire; Elirio Malaría, whose sharp proboscis is steady as a surgeon’s hand; and the flexible, washcloth-wielding dynamo, El Chavo Flapjack Octopus. In Volumes 1 and 2, they defeat the bad guys and form a lowrider car club—Bajito y Suavecito—that just might change the world.

The prequel, Lowriders: Blast from the Past, reveals how these three, as remarkable children (with encouragement from their parents), became best friends forever. Employing various species-specific skills (not to mention often-hilarious English-Spanish-Caló word play), they joined forces to stand up to a local gang of bullies and learned about the Chicano Resistance along the way.

Here, we discover how our young mechanical genius and feminista, Lupe Impala, grows into her many passions: Lupe has two moms who, together, nurture her mechanical and scientific skills. Mamá Impala owns a “Yonke Shop” in which Lupe learns how to remake or repair just about anything; and Mamá Gazelle runs a studio where rare ivory-billed woodpeckers (pájaros carpinteros) hang out and secretively create the gorgeous, delicate Mexican art known as papel picado (“picado” and “woodpeckers”—get it?)

Meanwhile, young Elirio’s traveling salesman papá instills in him a passion for painting words, and one of his main lessons is the power and longevity of Indigenous peoples and languages. The notebook that Papá Malaría gives his son contains, he says,

…[T]he kind of words that you like. Words for animals, plants, and the things…that come from native folks, and describe the lands where they lived. Those people’s blood is in you too. Who do you think gave those folks mosquito bites? Our ancestors. Mosquitos contain the blood of everyone, just like language contains everyone’s words. Indigenous words are hidden in the English and Spanish people speak now, but they’re still there. 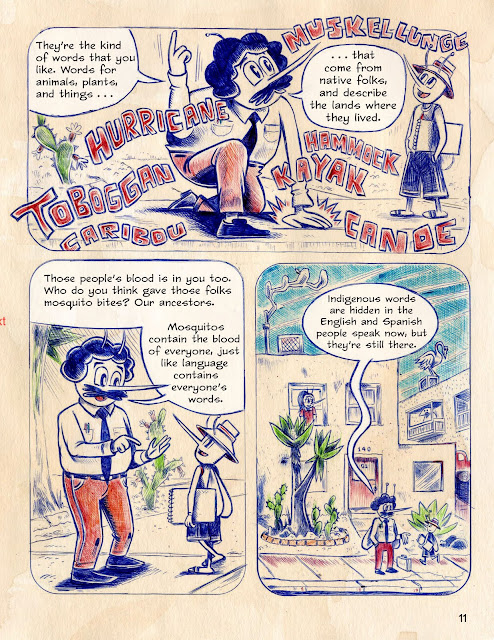 And Flappy’s parents—the talented mariachi who call themselves “Angélica del Mar y Los Mariscos” (“Angélica of the Sea and the Seafood”)—and named him “El Chavo Flapjack Octopus del Mar” after the popular Mexican TV show, El Chavo del Ocho, and encouraged him to be who he is: an eight-armed super-scrubber who can clean absolutely everything, no holds barred.

Enter Los Matamoscas (The Flyswatters), rough, tough, Caló-speaking bullies who run the main car club in town and control the show. When Los Matamoscas wreck Flappy’s bike and destroy Elirio’s mural paintings, Lupe comes to the rescue and the three quickly become friends. Encountering a stray kitten hiding in a lampshade in a pile of trash—“like a genie in a lamp”—they name him Genie and, of course, make three wishes. Lupe wants to become the world’s best mechanic, Elirio wants to be a successful artist, and Flappy just sorta wants to find something he can do without messing up.

After the three, who’ve transformed Lupe’s mamás’ wreck of a car into a gorgeous lowrider, are kept out of the competition because Los Matamoscas have declared that no girls or kids are allowed, the friends figure out how to transform the bullies as well. This takes “teamwork, talent and cooperation” and, led by Lupe, the trio jumps in.

As in their first two volumes, González’s traditional Chicano art (rendered in the time-honored red, blue and black Chicano BIC® pens)—here, with green added—on what appears to be a background of brown paper grocery bags (but is actually paper stained with Nescafé Suave), complement Camper’s uproarious and educational text.

Adult readers might want to use a magnifying glass to focus on details the naked eye might miss. On the title page, for instance, is a local shopping mall. In it, there’s a used car dealership with an image of the iconic Mexican comedian, Cantinflas. It’s called “Cartinflas.” There are also radio stations powered by a Thunderbird on the mountain, an Olmec head, a restaurant called “Gran Sapo,” a teeny, tiny luchador, and much, much more. On another page (on the wall of Elirio’s room), is a tiny poster of the great Mexican editorial cartoonist, Eduardo del Río, who, as “Rius,” weaponized his pen to mock imperialism, politicians, corruption and the Mexican power structure in general. Here, he’s drawn as a mosquito (probably to represent his stinging cartoons), holding a skull.

Hint for those readers who don’t understand Caló: If you can’t find it in Google Translate, it’s Caló, which is actually pretty easy to figure out. It’s a street version of sometimes-combined English and Spanish (like “¡Watcha!” which rhymes with “gotcha,” which is not Caló). There’s also a helpful translation of the Caló and Spanish words and phrases at the bottom of each page.

Camper’s extensive glossary explains Spanish, Aztec-based, and Caló references, words and phrases (“What does it mean? / ¿Qué significa?”); and her Author’s Note contains an extensive list of words rooted in the Arawak (Taino), Abenaki, Carib, Guugu Yimidhirr, Inuit, Micmac, Nahuatl, Ojibwa, Sami, and Tupi—from Indigenous languages around the world. As well, there is material about ivory-billed woodpeckers, the Chicano Art Movement, the technique of airbrushing, a short bibliography of sources, and much, much more.

Camper’s hilarious story and González’s over-the-top artwork together encourage development of imagination and appropriate suspension of disbelief. Lupe, Elirio and Flappy are real people, their struggles are real struggles, and their solutions are not all impossible, either.

Finally, and possibly most important, is that our young protagonists model group problem-solving, something rarely seen in books and stories for young people.

Lowriders: Blast from the Past is a satisfying, not to mention hilarious, read; something for kids of all ages. It’s perfect for bilingual kids, young hablantes learning English, young English-speakers learning Spanish—and will especially resonate with kids who are fluent in Caló and may live in El Paso, Tejas; or East El Lay, Califas.

Pull quotes: “A breathtaking tour de farce!” “The best thing since pico de gallo—the end will leave you wanting more!” “A heartwarming testament to the beauty and strength of young interspecies relationships!”

As with Camper and González’s first two volumes, Lowriders: Blast from the Past is highly recommended.