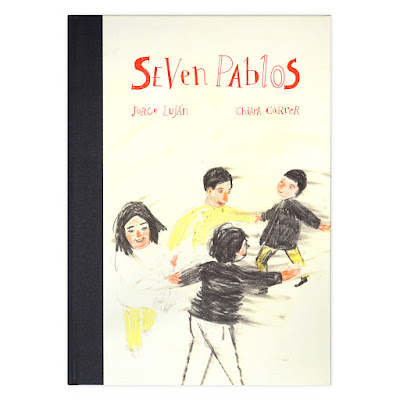 Dedicated to “the children of the world,” Lujän, Letham and Carrer gift us with seven evocative vignettes written in the third person narrative voice, each about a young boy named “Pablo,” each from a different country in the colonial world. Each Pablo has a story, and here, young readers will get a glimpse of their lives.

Seven Pablos is not something that youngsters will pick up and quickly put down. An oversize clothbound book with a black spine, it’s unusually heavy for a picture book—in content, design and actual weight—and will slow down readers as they absorb what’s happening in and around the lives of these children.

Rendered in graphite pencil on a dark, somber palette with occasional spot colors of yellows and reds, some of Carrer’s drawings may appear to have been hurriedly drawn and colored in by children—perhaps by the Pablos themselves. But young children don’t often portray the depth of expressions or emotions seen here.

“Pablo is eight years old and lives in Chile.” His father labors in a copper mine and, when he comes home, he quickly eats and falls into bed. Pablo softly puts his hand on his sleeping father’s chest, and “it feels like he’s touching the center of the earth.” On the left side of the double-page spread, readers will see two run-down, tin-roofed houses in the precariously built shantytown where this impoverished family lives.

“There is also a Pablo living in Ecuador,” deep in the heart of the Amazon jungle, where his mother ekes out a living by picking and selling fruit. One day, they meet a group of traveling musicians, adding their songs to the trills of the jungle. Pablo’s mother runs after them to share an orange, and mother and son call out, “Don’t forget us!”

“Pablo is an Argentine boy who lives in Mexico.” His eyes show his sadness as he thinks of all his friends and relatives who have been taken away by the military dictatorship from which he and his family have escaped. 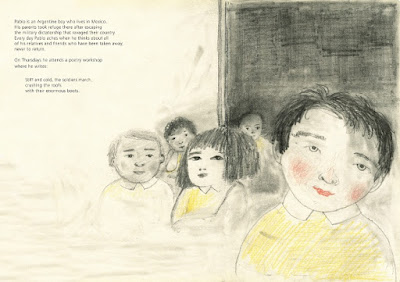 In school, Pablo attends a poetry workshop, and he has written this:

Stiff and cold, the soldiers march,
crushing the roofs
with their enormous boots.

The full-bleed, double-page spread that follows depicts the faceless, booted soldiers, standing stiffly in line, their arms pressed to their sides. Except for their hands, the entire spread is dark gray. Connecting with the text and Pablo’s poem on the previous page, readers will recognize what this horrifying spread represents.

Another Pablo, from Guyana and living in New York, confides in a guest poet that, when he grows up, he wants to be “a big guy in a uniform” so that he can “beat people up and get away with it.” After the poet quietly encourages Pablo to write down and draw his fantasy, the poet asks him if he would like someone to get away with doing that to him. And, “a few moments later, Pablo picks up the sheet of paper and rips it again and again and again.”

Pablo, the son of a teacher, lives in Peru. He thinks of his godfather, Frejolito, who used to be the mayor of Lima and would give cups of milk to all the poor children. Everyone remembers him, and Pablo thinks of how things might have been different if he had become president.

“Pablo also scavenges in a favela in Rio de Janeiro,” picking through an enormous garbage dump with other children, looking for things to sell. Each child is weighed down by a large canvas bag, filled with junk, hung over one shoulder. When a well-dressed journalist from the city (who carries an oversize leather envelope bag hung over her shoulder) asks him what he’s doing in the garbage and why he doesn’t go to school, he’s embarrassed and confused because she doesn’t seem to understand what’s obvious to him.

Riding on the top of a speeding train with hundreds of other desperate refugees, another Pablo, who was born in Chiapas, is on the way to the US border. This is his third try; the other times, he was grabbed by the border patrol and sent back. This time, he wears his mother’s wedding ring around his neck. (These trains are collectively known as “La Bestia,” the Death Train, and travelers weigh the chances of arriving alive against being killed or maimed by accident or murder. Pablo carries his mother’s wedding ring in case he has to pay a gangster for protection.)

As each vignette ends, readers move on to the next while at the same time looking back. Luján relates the stories of the Pablos with care and respect for them and the young readers as well. He does not tell complete stories here because there are no easy answers; rather, he leaves room for child readers to search further and think deeply about the world’s children; the harrowing social, political and economic situations that confront them—and what we can all do to become part of the solution.

“There are many Pablos in the world,” Luján writes, “yet they are all one. Inside of each is a heart that beats and with the same rhythm as the ocean’s waves and the rotations of the planet.” 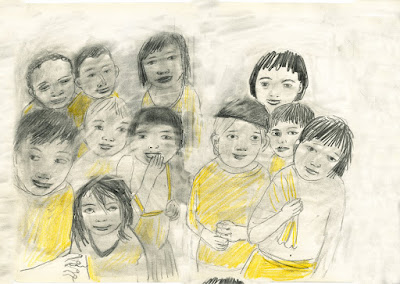 On the cover, Carrer has painted five smiling children, joining hands in a circle dance. And on the final spread, her evocative art shows 11 children, virtually bathed in yellow, some smiling, all looking directly at the reader, as if to say: “Here we are. Don’t forget us.”

Seven Pablos is complex and hard-hitting, yet at a child’s level of understanding and empathy. Luján, Carrer and Lethem are speaking truths to children about poverty, racism, militarism—and privilege—so that children can speak truths about power. It’s highly, highly recommended.