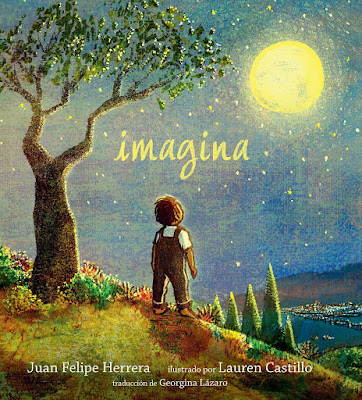 [Note: This review developed as a conversation between María Cárdenas and Beverly Slapin.]

María: This morning I cracked open an egg and was delighted when I discovered two yolks—in the culture of my family, a symbol of good luck and abundance. It transported me back to my childhood and my heritage—of the imagination my family encouraged in me and my siblings.

In considering my own childhood—the traumas and the joys and the things in between—I thought deeply about how important imagination is for all children, but especially for those who are struggling in their lives, who are trying to find a way for things to be better. As a long-time educator, I’ve found that imagination can have the power to redirect children in sometimes-problematic circumstances—to inspire them to see themselves positively.

Beverly: In Herrera’s series of short, evocative, free-verse poems—each of which ends with the whisper, “imagine” or “imagine what you could do”—he welcomes young children into his own life, encouraging them to enlarge their own perspectives and consider their own possibilities. As well, youngsters will learn to embrace compassion, humility and empathy.

Immigrant, migrant and refugee children who are hablantes will easily imagine young Juan Felipe’s life as a farmworker child, helping his mom feed the chickens, walking to the next town to fill a bucket of water, feeling the tadpoles swimming across his hands in a creek—and waving a sad adios to his amiguitos when his family has to move yet again.

And there’s the incomparable beauty of an unfettered imagination that could belong to every child:

If I let the stars
at night
paint my blanket with milky light
with shapes of hungry birds
while I
slept outside,
imagine what you could do…

María: As I read, I’m also thinking about the desperate and frightened children from El Salvador, Honduras, Guatemala, and México. Educators need to be careful to remember where the children are in their lives. Of course, all children need support and love—and also the capacity to imagine themselves in positive circumstances. They need to be encouraged to see themselves outside in the rain or in the sun or in a field or going somewhere they have never been. Or reunited with their families.

Beverly: As the young hablante enters school in the US—confronted by a language he doesn’t understand but everyone else speaks and reads—young readers born here will catch sight of his difficulties and immigrant young people will recognize them. 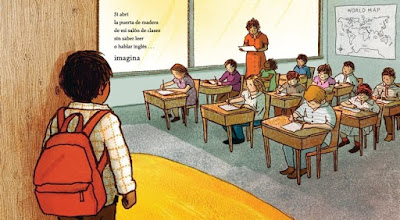 As he matures and immerses himself in two languages, the young student collects discarded “gooey and sticky ink pens” whose ink flows “like tiny rivers across soft paper”—and his love of creating poetry emerges:

If I grabbed a handful
of words
I had never heard and
sprinkled them over a paragraph
so I could write
a magnificent story,
imagine

Talented translator Georgina Lázaro is the perfect partner for Herrera’s short, lyrical verses. Rather than a word-for-word translation, Lázaro’s Spanish version beautifully evokes Hererra’s rhythm and voice in the original. In her expressive and sometimes playful Spanish, Lázaro often switches metaphors, dancing between the two languages.

And, no less importantly, in translating Herrera’s repeated line, “Imagine what you could do,” Lázaro employs the familiar “tú” rather than the formal “usted.” (“Imagina lo que tú podrías hacer.”)

Lauren Castillo’s luminous artwork, in pen-and-foam monoprint, brings young readers into Herrera’s life. Heavily textured, red-earth tones with dappled light and color in backgrounds suggest the Mexican countryside of Herrera’s childhood. Other spreads contain lots of white space and detail, such as the youngster’s helping his mamá feed the chickens while laundry dries in the sun. 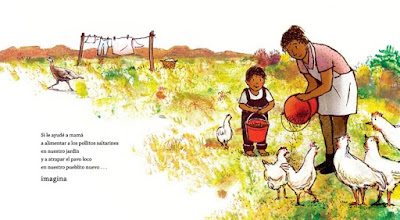 María: Imagine // Imagina are deep enough—in meaning and symbolism—for older readers as well. For instance, younger readers may not immediately understand the importance of walking to the next town to fill a bucket of water for the whole family, but older readers will. And older kids in the city may not know what it feels like to have tadpoles slipping though their fingers, but younger campesino kids will.

Sometimes young people struggle to imagine good things, or even being in a place that’s not chaotic. In particular, Latinx kids who may be struggling with issues at school will see themselves supported in Herrera’s work. That said, I don’t see Imagine // Imagina as  “bootstrap” stories. Rather, they're hopeful stories that encourage young people to think about who they are and to imagine what they can do.

María and Beverly: In Imagine // Imagina Herrera (US Poet Laureate, 2015-2017) extends his hand to the many child refugees, migrants and immigrants here in the US—and encourages them to think about who they are and imagine the possibilities of their own lives. He’s created  deeply satisfying and empowering books that will help build resilient kids who can imagine a better world. They’re highly, highly recommended.