Niños: Poems for the Lost Children of Chile 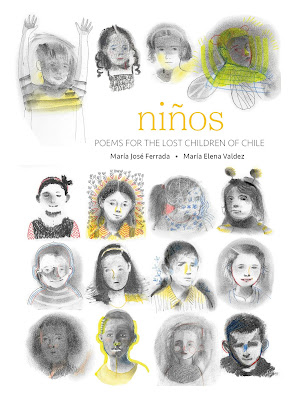 On September 11, 1973, a U.S.-led coup d’etat assassinated Chilean President Salvador Allende and overthrew his populist government; and installed in its place the fascist regime of General Augusto Pinochet. For the next 17 years—until democracy was restored—Pinochet ruled with an “iron fist”: imprisoning, torturing, murdering and “disappearing” thousands of Chilean citizens. Among these 3,197 desaparecidos, 34 were children.

In Niños: Poems for the Lost Children of Chile, Chilena author María José Ferrada and illustrator María Valdez remember and honor those disappeared children whose names and ages are listed on a final page. Each poem and illustration, titled with a child’s first name, is a gift to the children and their parents—and to the people of Chile, who still mourn and remember.

That none of these short, beautifully illustrated poems mentions Pinochet or the despicable things that he did is a metaphorical payback to him and to dictators in general. All children’s lives should be full of love and beauty, and, in a sense, Ferrada’s tender poems and Valdez’s soft illustrations name and remember these children as their lives should have and would have been. In imagining these children’s lives without violence, they’ve returned to these niños desaparecidos the lives and childhoods that the fascists stole from them.

Here, young readers meet, among others:

Alicia, who releases her birthday balloons to give a gift to the wind

Jaime, who learns to sing from a bird nesting nearby

Soledad, who writes a symphony from the sound of raindrops on the roof

Paola, whose heart buzzes when she sees an insect for the first time

Eduardo, who watches the flight of the first leaf of autumn

Jessica, who leaves a gift for the ants disappearing over the edge of a table

Felipe, who turns a light bulb on and off like a miniature sun

Jose, who invents his own dictionary

Orlando, who draws insects to march in single file

Sergio, who plants words in a flowerpot so he can watch them bloom

Valdez’s double-page spreads of soft-edged artwork—accomplished in watercolors, charcoal, graphite, and pastels, on a muted palette of grays, greens, blues, and browns with touches of yellows—are serene and beautiful. They complement the gentleness of the poems and the imagination of the children.

In her dedication, Ferrada, who works as the children’s editor of Memoria Chilena (Chilean Memory), a digital resource center of the National Library of Chile, writes:

This book is an homage to those thirty-four Chilean children, who in these pages play, dream, and listen to the voices of their mothers. Because this is what we think children should do. But this book is also a reminder, an alarm. For we tell this story knowing that at this moment, many children feel afraid, suffer tragedies, and even lose their lives because of political violence. To those children, and to the memory that helps us defeat monsters, we dedicate this book.

Towards the end is a list of the full names and ages of the 33 children, victims of Pinochet’s fascist regime. Some were only a few months old. The final poem, opposite a blue sky with animals leaping in the clouds, is for a child named Pablo:

And all those shapes

that can be seen in the clouds I’ve learned to stare at.

When I learn to speak,

these words will be the first things I’ll say. 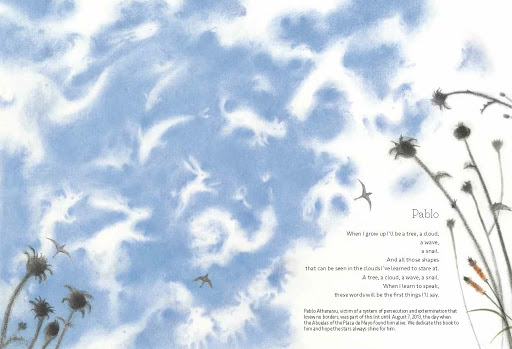 Below this poem, there is another name: “Pablo” is Pablo Athanasiu, who had been disappeared as an infant and was found, alive, as an adult:

Niños is also dedicated to Pablo Athanasiu, who had been part of this list until August 7, 2013, when the Abuelas of the Plaza de Mayo found him alive. We dedicate this book to him and hope the stars always shine for him.

Niños: Poems for the Lost Children of Chile is highly, highly recommended.

In its previous edition, Niños received recognition from the Academia Chilena de la Lengua (Chilean Academy of the Language) for the best literary work published in Chile, the Premio Municipal de Literatura de Santiago (Municipal Prize of Literature of Santiago) in the category of youth literature, and was chosen to represent Chile in the catalog, La Organización Internacional para el Libro Juvenil (International Organization for Children’s and Young People’s Books; in English, from IBBY, or International Board of Books for Young People).

For older students (high school-up) and their teachers, I highly recommend the documentary film, The Judge and the General, which chronicles the investigation by Chilean Judge Juan Guzmán, a former backer of the Pinochet regime, of the mysterious disappearances of countless political opponents—and his own personal and political transformation—BHS