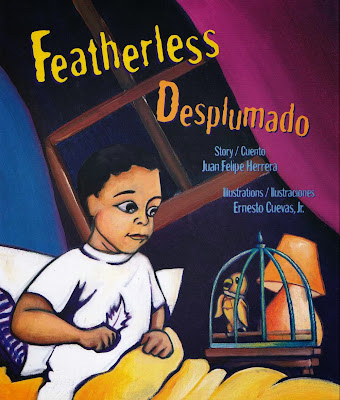 Tomasito, a child with spina bifida, feels out of place and frustrated at his new school where everyone asks him why he’s in a wheelchair. His father brings him a caged parrot for a pet; the bird has a “pebble foot” and no feathers. “He was born a little different, like you were,” his father says, and suggests that Tomasito call him “Desplumado.” Tomasito’s new friend, Marlena, encourages him to join the school soccer team and—although his hands become “red and sore from zigzagging (his) wheely across the hot field”—Tomasito makes a cabeza goal and scores for the team. At home, Tomasito tells Desplumado that he can be a flyer, too: “There’s more than one way to fly!”

Herrera is an amazing poet; his Spanish version reads much better than the English. For instance, as Tomasito’s father surprises him with the little bird, he says, “¡Una sorpresa, Tomasito! ¡Mira, es para ti!” But the English takes all the feeling out: “A little pet, Tomasito! For you!”

Nevertheless, Desplumado is about a youngster with a disability who, with the support of family and friends, finds a way to push himself beyond his physical limitations. As such, it’s a good story to begin conversations about disability and inclusion; and about how people are generally more similar than different. Most important, a disabled child in the classroom would probably ignore the metaphor and enjoy the story. Recommended.

Note: Teachers can extend this kind of discussion with short films of wheelchair sports, such as basketball, soccer, tennis, and handcycling.