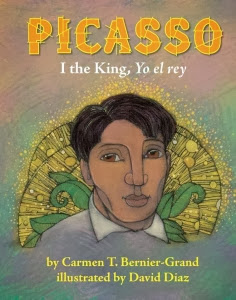 As in her other poem-biographies, Bernier-Grand’s elegant free verse is crisp and clean, with every word precisely chosen. Here, in 40 carefully researched poems, she chronicles the creative and turbulent life of Pablo Picasso—profound narcissist (“yo el rey”), notorious philanderer (“ravenous for orgies”), tormented hypochondriac (death, “the mistress that never leaves you”), loving father (“let the children just be children”)—and artistic genius, perhaps one of the most important of the past century. Although Bernier-Grand frankly discusses Picasso’s many relationships and marriages and how the women in his life inspired his artistry (“As paint is to brush, women are to Picasso’s art”), she neither sensationalizes nor demeans them.

Extensive back matter includes a biographical essay, entitled “Pablo Picasso and the Mistress Who Never Left Him,” which fills in any and all gaps in the poetry; a chronology, a glossary of Spanish words and terms, a list of sources, and copious notes on paintings and quotes.

Interspersed throughout the book are reproductions of some of Picasso’s paintings, including an exhausted woman bent over an ironing board, portraits of Gertrude Stein and Georges Braque, and sex workers in a brothel. I was especially glad to see Picasso’s perhaps most important and definitely most famous painting, “Guernica,” which memorializes the Nazi bombing in 1937 that killed some 3,000 people, injured more than another 1,000, and destroyed the Basque town. Accompanying the painting on a two-page spread are a descriptive poem and short historical note.

As an introductory biography of a particular artist, Picasso presents myriad opportunities for teachers of middle- and high school students: an introduction to modern art and artists, an exploration of the relationships between art and history and censorship (including point-of-view depictions of world events), a discussion of the many and varied forms of cultural expression, and a model for writing exercises of bio-poems.

In answer to those reviewers who criticized Picasso for not being a “happy” book and/or suggested that children should not be exposed to the seamy sides of Picasso’s life, I would say this: Every child who watches television, and every teenager who reads graphic novels, is exposed to sexuality, death, disease, suffering and war—in situations and circumstances that occur every day. I’d rather have children read an honest biography that discusses the issues of a person’s life than one that obfuscates them. Bernier-Grand is a brilliant storyteller who pushes boundaries and takes great care with her words. She is also ethical; I don’t believe she would ever attempt to conceal unpleasant facts about someone whose biography she decides to research and write. I applaud her choices, especially here. Picasso: I the King, Yo el rey is a remarkable achievement. It’s an illuminating and provocative work of art—poetically and visually. Highly recommended.