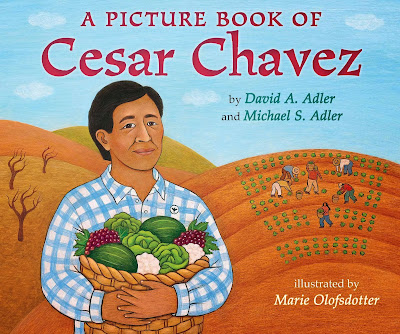 A Picture Book of Cesar Chavez is a cookie-cutter picture biography, a linear approach to Chávez’s life, from birth to death. It’s a simplistic telling, full of inaccuracies, and devoid of feeling and anything else that might encourage young children to empathize with the struggles of agricultural workers in Chávez’s time and continuing today.

The narrative is flat and dry, telling young readers what to think. On the first page, for example, the Adlers describe young César’s life:

As a child, Cesar Chavez traveled with his family from one farm to the next to pick beans, broccoli, lettuce, and other crops. After a day in the fields, his back often ached. His hands were sore. Yet Chavez and others who helped put food on Americans’ tables often had no tables of their own, no real homes.

The assumptions here are that César Chávez was born poor, that he had no real home, and that he was not “American.”

But the Chávez family was not always poor—in fact, for the first ten years of his life, young César’s large extended family owned an 80-acre ranch, a grocery store and a gas station—and produced enough to feed themselves, stock the grocery store, and feed any homeless people who happened by. Yet, what’s written about and shown here is a dry, barren environment: three shacks with burlap taking the place of doors, six dead trees in the background, and an oil can to sit on. Chávez has been quoted as saying, “I had more happy moments as a child than unhappy moments,” yet young readers here see no happy moments, only textual and visual descriptions of extreme poverty.

On the next page, the authors write that “César’s father was often too busy to spend time with his family,” and an accompanying illustration depicts the Chávez children only with their mother. In truth, César’s father worked very hard and was actively involved in his children’s lives. While their mother taught them dichos to live by and the importance of kindness to those less fortunate than themselves, their father taught them about the values of honest work and standing up to discrimination.

Rather than deconstruct the entire book, I’ll mention just two other excerpts. In describing migrant agricultural labor, the Adlers write:

Cesar’s father soon found work for the family picking peas. They walked, bent over, between the rows of plants. For a full hamper—twenty-five pounds of peas—they earned twenty cents. When the work on that farm was done, the family moved on…. When the farm boss was especially unfair or when work conditions were especially bad, Cesar’s father said, “Okay, let’s go,” and they quit.

The assumption here is that, although agricultural workers’ jobs could be difficult, they were free to leave and could easily find other work. But, besides the difficulty and danger of the work itself, migrant agricultural workers had to deal with all kinds of abuse. While the Adlers’ use of terms such as “especially unfair” and “especially bad” minimize the situation for farm workers, Kathleen Krull, in Harvesting Hope, shows young readers how conditions really were:

As he worked, it disturbed him that landowners treated their workers more like farm tools than human beings. They provided no clean drinking water, rest periods, or access to bathrooms. Anyone who complained was fired, beaten up, or sometimes even murdered.[1]

And, in César: ¡Sí, Se puede! Yes, We Can!, Carmen Bernier-Grand paints a striking portrait of migrant agricultural work:

Lechuguero,
a lettuce thinner,
a man, a woman, or a child
who pulls off smaller plants
to make room for bigger plants—
the patron’s green gold.

Row after row,
César walked.
Stooped over, twisted,
clawing at the chuga
with el cortito,
a short-handled hoe.

No boots, just shoes
sinking in mud,
clay clinging to the soles.

Every day swathed in scarves
covering his nose and mouth.
Trying not to breathe,
trying not to swallow
the smelly spray blowing on him.

In 1958, (Chávez) went to Oxnard and asked the farmworkers there to register and vote. They asked him, “Why is it we can’t get any jobs?” The jobs were going to workers from Mexico, who accepted lower pay.

What young readers will assume here is that Mexican workers came to steal jobs from the Mexican American farm workers. What really happened was this: From 1942 through 1964, the US brought in millions of manual laborers from Mexico to work the fields. These workers, known as “braceros,” were impoverished and exploitable, and the growers used them to depress labor wages. In Oxnard, young Chávez led a protracted faceoff with the fruit growers, who eventually caved and hired local workers. The Adlers’s simplistic description of the Oxnard struggle, by omitting this important information, blames the braceros for their own exploitation.

Olofsdotter’s illustrations, in ink and colored pencil on a subdued pallet, depict everyone as expressionless; they look frontward or sideward, never at each other. Even in the picture of César and Helen courting, they’re looking past each other, at a 45-degree angle! In one illustration, César, on a hunger strike, is sitting in an easy chair with a blanket over his knees. Helen is standing behind him, her hand on his shoulder. In front of them is a coffee table holding a pitcher of water. They appear to be inside. People are standing around, zombie-like. They appear to be outside. Yet, there are neither walls nor windows that would delineate inside from outside.

In a particularly egregious illustration, expressionless people look on as Chávez, weakened at the end of a long fast and supported by two farm workers, walks toward Robert Kennedy, who holds out a small loaf of bread. There are well-known photos of Chávez’s taking his first solid food after a 23-day fast in support of the farm worker strike against the Delano grape growers.[3] The photos depict both Chávez and Kennedy sitting in chairs next to each other. Their hands are touching as Kennedy offers Chávez a small piece of bread. The emotion is palpable. The effect of Olofsdotter’s version, however, is to distance young readers from, rather than bring them closer to, the people. I’d like to ask her why she did this.

While tiny figures of anonymous agricultural workers toil in the background, the cover shows César Chávez, wearing a tiny UFW button on a clean plaid shirt. His hands and face are clean; he is holding a large, clean basket filled with melons, lettuce, cauliflower, and bunches of grapes. Since agricultural workers harvest one crop at a time, this illustration may be symbolic of farm worker pride. But young children will not see—and teachers may very well overlook—the backbreaking labor and the struggle for human rights that continue today. A Picture Book of Cesar Chavez is not recommended.