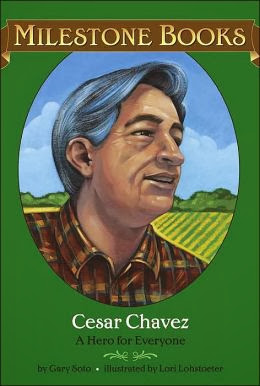 Soto’s narrative begins in 1962, as young organizer César Chávez and other recruiters walk from house to house in Corcoran, California, explaining to Mexican-American agricultural workers about a new union that would help them in their desperate need for justice. As a farm worker himself, Chávez knows that Corcoran is a dangerous place for seasonal workers—he knows that contractors often steal their hard-earned money, and he knows that “strikers had been beaten and shot and sometimes killed by armed farmers.”

The narrative then turns back to the beginnings of Chávez’s early life on his grandparents’ large homesteaded farm, where the whole family works together in tough Depression-era times. And school is far from welcoming for Spanish-speaking children—“all Cesar would remember of school was the whistling of the ruler as it came down on his wrist or knuckles.” Indeed, during his years as a young farm worker, Chávez’s experiences with poverty, injustice and racism are what shape him into the organizer he later becomes.

When the family, hungry and broke, is forced to leave their farm, young readers will see what young César and the other migrant agricultural workers have to endure; and as the narrative progresses, Chávez’s development as an organizer:

[The farm workers] had to wake up before dawn. They had to work stooped over for ten hours. They had to breathe in pesticides that stayed on leaves. There were no toilets. There was no clean water to drink. There were no rest breaks. Their whole day was just hard labor.

As Soto describes how César Chávez develops from inexperienced organizer of local Chicano workers to leader of the fledgling National Farm Workers Association, to joining with the Filipino compañeros of the Agricultural Workers Organizing Committee, to convincing the workers to adopt a tactic of nonviolence while engaging in the “fights in the fields,” to leading the 300-mile peregrinación from Delano to Sacramento, to the shouts of “¡Que viva la huelga!” and “¡Sí, se puede!” that were heard around the world, young readers will come to understand the life and work of a man of courage, humility and strength who fought for the rights of some of the most exploited workers in the US.

As a child, Soto worked the fields of the San Joaquin Valley; and currently serves as a Young People’s Ambassador for California Rural Legal Assistance and the United Farm Workers of America. He’s a brilliant and prolific storyteller whose knowledge and experience shine in this small biography of “a hero for everyone.”

Although this series, called “Milestone Books,” is designed for easy reading, the vocabulary is not oversimplified and the text does not condescend. Unfortunately, the book is printed on cheap “mass-market” paper and Lohstoeter’s black-and-white illustrations are less than engaging. Nevertheless, Soto’s evocative book can be paired with Carmen Bernier-Grand’s César: ¡Sí, Se puede! Yes, We Can! and Kathleen Krull’s Harvesting Hope: The Story of Cesar Chavez. All three are highly recommended.