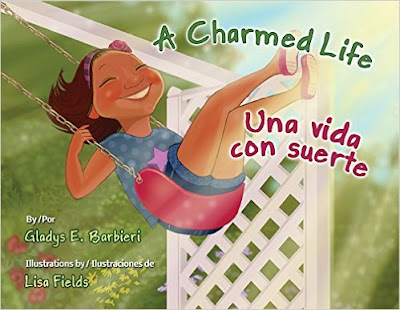 In A Charmed Life / Una vida con suerte, a young immigrant Latina accompanies her mother to work. As they get off the bus and walk the rest of the way to Mamá’s housecleaning job in a gated mansion, Felicia is told in no uncertain terms to behave herself and the child, having heard this many times before, nods her head. From the beginning, the portrayal of the relationship between parent and child is strained, culturally inappropriate and problematic: Mamá appears harsh and dismissive; Felicia appears exasperated and rebellious.

In the illustration of the two approaching Mamá’s workplace, parent and child in the foreground are dwarfed in relation to the huge mansion and forbidding black gate, which spans the width of the page.

While Mamá sets to work, Felicia, annoyed and bored, sits at a large table “to keep out of [her] mom’s way,” and starts coloring. Her mother’s appearance also embarrasses her: “I don’t really like her headscarf,” Felicia says, “nor do I like being here.”

The young reader is not told—and there are no visual hints, either—about other family members. Is there a father? Are there grandparents, aunts and uncles, siblings, cousins? Where are the family’s past and present communities? Why are they here? Why does Mamá take her daughter to work with her? Why isn’t Felicia at school? And, being stuck here with her mom, why isn’t the child helping out? A Latina child about Felicia’s age would probably know the routine: she would be more likely to come in, pick up a broom or dust rag, and get to work by her mother’s side.

Rather, Felicia gets up from her coloring and takes a furtive tour of the mansion. Walking into a lavishly designed child’s room with enormous stuffed toy animals and a canopied crib, she “can’t believe [her] eyes” at all the gorgeous stuff she sees. “Forgetting [her] mom’s list of dos and don’ts,” Felicia races out to the patio, gets on a swing and swings “so high that [she feels she] could touch the sun.” She’s way impressed at all the things she doesn’t have.

An important short digression: Felicia’s little adventure makes no sense, cultural or otherwise. For a Latina child, especially an immigrant Latina child, to sneak off by herself, roam around a mansion and walk through the rooms, go outside and use the swings on an open patio where she could be seen and caught, might—at the very least—endanger her mother’s job. The child and her mother could be accused of stealing, they could be arrested, and, depending on their immigration status, there could even be deportation proceedings. For a Latina child to be blissfully unaware of this kind of danger is unreal, even if this is “just” a picture book.

But young readers will see no danger here, just a curious Latina child and a kindly white employer. She’s Mrs. Fitzpatrick, a red-haired white woman who, rather than castigating the child, brings her a pitcher of lemonade and a plate of cookies, sits on the swing next to her, and tells Felicia that her own Irish great-grandparents had immigrated to America with dreams of a better life for their family.

Mrs. Fitzpatrick, of course, is wealthy. She is also pregnant. She knows her child will never want for anything: that her child will have a charmed life. So, with that realization, she gives Felicia a charm bracelet. For the benefit of young readers who may not immediately “get” the improbability of this scene or the concepts of paternalism and noblesse oblige, Mamá peers through the window while Mrs. Fitzpatrick tells Felicia:

Believe that you will have a better life and don’t let anyone make you feel that you don’t deserve it, because you do. We all deserve to have a charmed life.

Here, the bringer of wisdom is not a hardworking Latina parent, but her employer, a privileged white woman. The implication is that all immigrant, migrant and refugee families are on an escalator ride from poverty and neediness to wealth and independence. Indeed, “a charmed life” is a metaphor for obtaining the American (material) Dream. If you follow the script—work hard and strive for material goods—your children will have a “charmed life.”

On the bus home, Felicia exuberantly tells her mom that she is “going to have a super charmed life,” to which her mom doesn’t respond. And when Felicia insists that they “both are” going to have this charmed life, Mamá responds, “Yes, Felicia, you will have a very charmed life.” The End.

Alonso’s Spanish translation closely follows the text, sometimes to a fault. Felicia’s description of a house that’s “so grand,” for instance, is translated as “tan grande”—so big. And Fields’ digitally produced illustrations, in bright glowing colors, parallels the text as well. Here, Felicia forefronts just about every scene: Where she is with her mother in the beginning pictures, the child is bored and unhappy. When she sees the material wealth that surrounds her and when she’s with her white benefactor, the child is joyous, as she is in the last scene, where she is trying to convince her mom that she—no, the two of them—will eventually have a charmed life.

In knowing that this “charmed life” will somehow happen to them, Felicia—unlike the majority of desperate, fearful immigrants, migrants and refugees who come here from Mexico and Central and South America—is not looking for a peaceful life, a safe life, or a life without hunger—she’s looking for a life with lots of stuff. And she knows that, because of her new charm bracelet, or maybe because her mom works hard, they will somehow have this life. The subtext and unstated assumptions here are that, if immigrant, migrant or refugee parents work hard enough, like her mother does, their children will “make it.” If their children don’t “make it,” it’s because the parent or parents didn’t work hard enough.

That Felicia is so enamored by Mrs. Fitzpatrick and her great material wealth suggests to young readers that Mamá and child live in an economically marginalized neighborhood with little of value, material or otherwise. There is no evidence of societal or class circumstances. Rather, readers see only the perspective of a Latina child who’s an outsider with no family except for her mother, no community, and no culture of any worth. There is no hint that people who are economically impoverished can still hold on to all that makes them familia, all that makes them cultura, and all that makes them human.

While the author and illustrator have created what many children will consider an engaging and compelling picture book, the story’s message is dishonest. Coming to the US and working hard does not guarantee that anyone will achieve the American Dream—or that descendants of hard-working immigrant, migrant and refugee families will live charmed lives. Far from it. This system is rigged to benefit the 1%, and children of Felicia’s age—who may not be immigrants, migrants or refugees but who probably already know about unfairness in things large and small—need to learn about the long, hard struggles for justice as well.

There are many picture books that can move children to understand the necessity of people’s struggles for justice, and even encourage them to become participants. These include (but are not limited to):

It’s possible that, in the opening pages, Mamá’s expression when she reminds Felicia to behave might be more out of fear than coldness. It’s possible that, in the illustration where an unsmiling Mamá looks out the window at Mrs. Fitzpatrick and Felicia enjoying each other’s company, that her expression might be more of concern than distance. It’s possible that when Mamá stares out the bus window rather than admiring Felicia’s charm bracelet, she’s contemplating the reality of their lives. But young children will not see any of this. What they will see—as evidenced by the story and by Mamá’s smile on the last page—is that life is what you make it and turns out well if you really want it to.

Recently, a colleague suggested that young students could be encouraged to rewrite and/or reimagine A Charmed Life / Una vida con suerte in ways that relate to their own lives. I can see the value of such an exercise, but it’s not enough to recommend this book. Our children deserve better. Our children deserve to see the truths of their lives, and to see what part they can play in helping to shape their own futures—and the futures of other children as well. They do not need yet another Cinderella story that makes no sense to them.