Lo que mi abuela me dijo / What My Grandmother Told Me: Practical Wisdom from Spanish Proverbs and Sayings 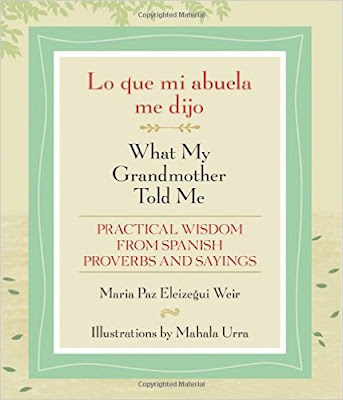 When young Cesario Estrada Chávez came home from school one day, humiliated and punished by his teacher for speaking Spanish, he received the gift of this dicho from his mother: “Quien sabe dos lenguas vale por dos”—He who knows two languages is more valuable than he who knows only one. This dicho, and the love he received from his parents and grandparents, shaped the boy who grew up to become a leader in the struggle against the oppression of migrant agricultural workers.

Everywhere that Spanish is spoken, parents and grandparents teach through dichos. Children learn these easily memorized cultural markers that—in the process of educating and instructing children about their own lives and the lives of their families, their peers, their society, and the world—indirectly communicate values, behaviors and morality. In short, dichos are signifiers: They live in, and are an integral part of, the culture.

In Lo que mi abuela me dijo / What My Grandmother Told Me: Practical Wisdom from Spanish Proverbs and Sayings are dozens of dichos, organized into six thematic units—Juventud / Childhood, Amistad / Friendship, Comportamiento / Manners, Lucha y trabajo / Work and Strife, Sabiduría /Wisdom, and Amor y destino / Love and Destiny—appearing in Spanish first, paired with an English translation or interpretation. The book, in some ways reminiscent of 1950s readers, is attractively designed, and Mahala Urra’s illustrations, in ink and flat watercolors, mostly feature the young “Maria” in a red dress and grandma in an olive dress.

In her preface (La voz de mi abuela / the Voice of My Grandmother) and afterword (Las lagrimas de mi abuela / The Tears of My Grandmother), Eleizegui Weir writes about how these dichos from her Spanish-speaking Filipino grandmother shaped her life (“En tus apures y afanes / acude a los refranes” // “When needs and difficulties arise / take refuge in the proverbs.”)

There are some beautiful dichos and illustrations here. Here is an illustration of two girls hugging each other: “A buen amigo, / buen abrigo” // “A good friend is as comforting / as a warm coat.” (pp. 34-35). Here is a girl, comforting her sad friend with a cup of steaming cocoa: “En la necesidad / conoce la amistad” // “True friends are with you / when you need them.” (pp. 36-37). And here is a blindfolded girl, offering a gift to an appreciative child she may not know: “Haz el bien, y no mires a quien.” // “Do good without concern / for whom you do it.” (pp. 42-43).

Unfortunately, without regard for appropriateness for today’s children, many of the dichos (brought from Spain and Portugal through the Philippines) read like advice from the Spanish and Portuguese Inquisitions. Authoritarian and basically medieval in their value systems, they perpetuate gender stereotypes, conformity and acceptance, greed and ill will, and physical child punishment.

The implications in most of this collection are that what life has given you is God’s will—know your place in society and you’ll be rewarded in heaven for submissiveness on earth.

Often, the tone is softened to the point of not making any contemporary cultural sense and the literal illustrations have little or nothing to do with the particular dicho. Here, for instance, is a dicho that reads, “A Dios rogando / y con el mazo dando.” // “Praise God / but keep on hammering.” (pp. 124-125).  The illustration shows two girls, one praying and the other hammering a plank onto a picket fence. But making a fence has nothing to do with the dicho, which, in all likelihood, originated in Spain during the Inquisition. The use of the word “mazo” would link it to torturing—praising God while clubbing people with maces, the deadly weapons often used for this purpose.

The religious orientation of these dichos is not from Filipino culture so much as from Spanish colonial culture brought over in the 16th Century. Here, the historical origins have been appropriated and, with the aid of the illustrations, placed into more benign cultural contexts. This collection—interpreted in a way that attempts to make the dichos relevant to today’s children but fails to do so while glossing over the reactionary ideology of the originals—is unappealing.

As a primary source of historical significance—an academic collection of teachings that encompass colonial Spanish Catholic mores, together with a discussion of how some of them were transmogrified into dichos for children in contemporary Spanish-speaking Filipino culture—these dichos might have been valuable. But in the attempt to transform them into a book for young audiences, the original meanings were overlooked as were their appropriateness for contemporary children. Despite several very nice pieces and lovely artwork, Lo que mi abuela me dijo / What My Grandmother Told Me: Practical Wisdom from Spanish Proverbs and Sayings is not recommended.