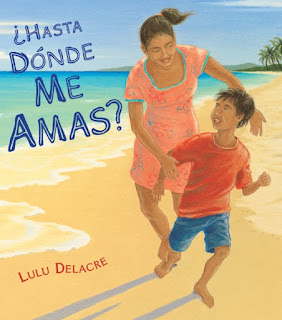 Stories about children or anthropomorphic young animals looking for boundaries appeal to youngsters all over the world. Sometimes these are teaching stories that give young listeners or readers a safe place in which to think about the limits of what they can and cannot do.

In Margaret Wise Brown‘s delightful Runaway Bunny, a little kid bunny verbally spars with his momma bunny, testing her unconditional love by declaring his plans to run away from home. As the momma bunny joins in the game, the little kid bunny’s imagined escapades—from becoming a fish to a flower to a rock to a bird to a tree to a sailboat to a circus performer to a little (human) boy—finally land him at home, where momma bunny reassures him that she’ll always be around to take care of him. In 1942, when much of the world was at war, momma bunny’s calm reassurance resonated with little human kids and, along with Brown’s Goodnight Moon (1947), still does.

In the years following the publication of The Runaway Bunny, there have been many picture books that focus on children’s or young animals’ testing their parents’ unconditional love for them; each one ends with the parent (usually the mother) affirming an everlasting love for the child.

In 1991, author Barbara M. Joosse and illustrator Barbara Lavallee created the first best-selling “multicultural” version of a child’s testing a parent’s unconditional love: Mama, Do You Love Me?, featuring an Inuk child and her mother. This abysmally written and –illustrated appropriation of Inuit life and culture proved to be a lucrative project, and in 2005, the Joosee-Lavallee team followed with the equally awful Papa, Do You Love Me?, which featured a Maasai child’s testing his father.[1]

An earlier, and much better written, story of the love between mother and child is On Mother’s Lap by Ann Herbert Scott and illustrated by Glo Coalson. This story, originally published in 1972 and republished in 1992, also takes place in the Arctic, but focuses on “showing” rather than “telling.” And the little-known but no less beautiful Mama’s Little One by Kristina Heath, may be difficult to obtain, but is well worth searching for.[2]

And now, multi-talented (and multiple award-winning) artist, author and poet, Lulu Delacre, has created ¿Hasta Dónde Me Amas? and How Far Do You Love Me?, two gorgeous picture books about love for youngest listeners to readers of all ages—containing neither conflict nor testing nor “runaway multiculturalism.” Rather, her lyrical verses that describe the love between adults and children—in both Spanish and English versions—are deceptively simple, yet complex in their connection with the lands and peoples; and stunningly illustrated with soft pastels, lush with intense color. 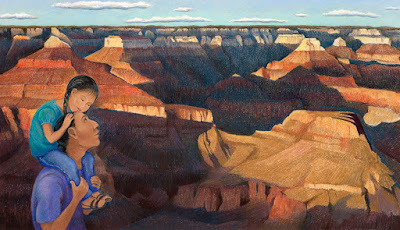 Each dazzling double-page spread tells a story of its own. From the beautiful sandy beaches of Vieques, to the top of the Grand Canyon, to a freshwater spring in Yucatán, to the unimaginable heights of Machu Picchu, to an enormous glacier in Antarctica, to where the sun and the rain produce a rainbow on the Serengeti Plain, to the crests of the desert in the Sinai, to the lavender fields of Provence, to where the river meets the sea in the Alps, to a Himalaya Mountain Range, to the bright pink water lilies floating on the Mekong River, to a gigantic eucalyptus on Kangaroo Island, to the coral reefs on the ocean floor of Queensland, and back to Vieques, are parents and their children, enjoying each other’s company and living in their worlds.

Here, at the top of a peak in the Grand Canyon area of Arizona, a father talks with his daughter who is perched on his shoulders. Here, in the windswept desert of the Sinai, a mother cradles her infant. Here, in a field of lavender in Provence, three girls pick flowers as an adult watches from a distance. Here, in the Mekong River, a joyful little girl and her parents paddle amidst the bright blossoms of water lilies. Here, on Kangeroo Island, a young boy and his father lean against an enormous eucalyptus tree that just about touches the sky.

The books begin and end with a mother and her young son in Vieques, the place of Delacre’s birth. In the first illustration, the two are lying on the warm sand, and the boy asks, “¿Hasta dónde me amas?” or “How far do you love me?” And on one of the final spreads, the circle is closed as Mamá asks her son, “¿Y tu? ¿Hasta dónde me amas?” or “And you? How much do you love me?” To which the child answers, “¡Yo te amo hasta la luna!” or “I love you to the moon!” and as she kisses her child goodnight, Mamá says,

And I love you farther than the stars,
to the space beyond the space we know,
where light becomes love
that nestles deep,
deep inside you.

“The inspiration for the original poem in Spanish,” Delacre told me, “was a game I used to play with my own daughters when they were little. We never played ¿Cuánto me amas...? We played ¿Hasta dónde...? It was always fun trying to travel farther and farther away by showing the length and depth of our love.” One afternoon, she said, after going for a walk and thinking about the love she felt for her daughters, she sat down to write what she had composed in her head. “I've traveled to many places in my 32 years of marriage when I wrote the poem,” she said, and “without those trips I don’t think the poem would have come to me so effortlessly. So did it take 45 minutes to write it or 32 years?” Maybe somewhere in between, I’d guess. In any event, it’s clear that Delacre did not sit down to write a marketable bedtime picture book with conflict that called for resolution. And I’m glad for that.

After writing the lyrical Spanish, Delacre gave the text over to her daughter, Verónica, who worked with her mother to craft these books into an evocative dual-language expression of love. Without polemic and without belabored notes about “multiculturalism,” what Delacre shows—rather than tells—is that, across continents, cultures, ethnicities and religions—caring adults love their children.

Some other plusses: On the next-to-last spread, Delacre has hand-lettered “the question” in 23 different languages in order to prompt children and loving adults to play in the language of their choice. There’s also a map that references the 13 locations around the world in which the poems are situated.

However, there was a missed opportunity here that I feel must be addressed, so I’ll direct these questions to the publisher: Why was this brilliant book—originally written in Spanish—published first in a small English-only hardcover, and then later, seemingly as an afterthought, in an even smaller, Spanish-only paperback? Why wasn’t this awesome work seen as important and beautiful enough to have been made into a much larger, hardcover, bilingual book, with the Spanish text predominant? Such an effort would have given more space to the art and would have made the one book accessible to both hablantes and English speakers. And, finally—wow! Why didn’t someone catch that the title on the title page of the Spanish version is missing an initial interrogation mark? (This was a major typo.)

As they stand, both ¿Hasta Dónde Me Amas? and How Far Do You Love Me? encompass a beautiful journey of endless love, without conflict, without testing; and they are highly recommended. Lulu Delacre is a kind, generous spirit—an international treasure whose art and words are a gift. Muchísimas gracias, Lulu.

[2] See reviews of both of these titles, along with Mama, Do You Love Me?, in A Broken Flute: The Native Experience in Books for Children, edited by Doris Seale and Beverly Slapin (AltaMira Press, 2005), p. 302.