Playing for the Devil’s Fire 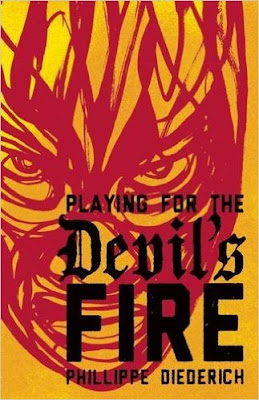 Some 500 years ago, conquest of this hemisphere was relatively easy: foreigners arrived, planted their flags, massacred the inhabitants and stole the land. Now, conquest involves massive CIA-financed drug trafficking via international cartels, mass murder and “disappearances” to soften up and terrorize the populace, rapid economic destabilization, and finally, “regime change” from elected governments to US-friendly fascist dictatorships.

In the Americas, the conquest and never-ending colonialism create dire consequences for hundreds of thousands of terrified refugees—many of them unaccompanied children—who flee to El Norte to escape both state-sponsored terror and the murdering narcotraficantes. They flee, as a colleague told me, “into the mouth of the shark.” Even as they escape the issues in their own homelands, the conquest follows them into  lifelong struggle and trauma.

And, just this morning, the Obama administration announced a new series of raids to round up and deport families who have been seeking asylum here from violence and death threats in Central America.

As I read Playing for the Devil’s Fire, I’m thinking of all of these aspects of colonization, and, in particular, about the “disappearance” of 43 students from the Ayotzinapa Teaching College in the southwestern Mexican state of Guerrero in September 2014. Here, the police, local politicians and everyone else in power, acting in league with the gangsters, maintained business as usual.

The title’s “devil’s fire” is two things: It’s the diablito rojo, the rare, coveted marble every Mexican teenage boy dreams of winning. And, perhaps more important, it’s a metaphor for the carnage and conflagration sweeping much of Latin America.

Libero (Boli) Flores’ harrowing story begins as the 13-year-old narrator describes the scene in Izayoc (the place of tears), his sleepy little town near Mexico City:

It was a hot Sunday morning when we discovered the severed head of Enrique Quintanilla propped up on the ledge of one of the cement planters in the plaza.

The head belonged to Boli’s teacher, who was a known activist, and a note was found in his mouth: “He talked too much.”

Boli, an average teen—whose only interests had been winning at marbles and polishing shoes to earn some cash so he and his friend, Mosca, could attend the lucha libre—begins to notice the arrival of well-dressed strangers driving late-model SUVs with black windows, spinning silver rims and California license plates. They’re moving into town and building big houses. A new four-lane highway has been built—and townspeople start to disappear, businesses start to close, and Boli’s friends start to hang out with the newcomers.

There are whispers. The townspeople know what’s going on. But when Boli’s parents ask questions of those in charge, there are no answers. The police chief knows nothing, but he’s seen in the company of the strangers. The priest knows nothing, but his church has been beautifully renovated. And then Boli’s parents, on their way to Toluca to alert the federal police, suddenly join the “disappeared.”

Boli is certain that “something bad has happened.” Nevertheless, he puts his hope in an unlikely hero, a washed-up luchador named “El Chicano Estrada.” Boli sees him as larger-than-life—like El Hijo del Santo, son of the world’s most beloved luchador; a superman who battles rudos in the ring and criminals on the outside; a crime fighter who rights wrongs and brings truth and justice to all those in need.

But the violence in the lucha libre ring and in the Santo movies is choreographed and scripted. What’s real is horrific and unpredictable. As El Chicano Estrada tries to warn Boli,

“Everyone’s giving you hope, telling you there’s a chance, that everything’s going to be okay. It’s all lies. We are a country built on lies. Listen, forget the illusion that the world is a good place. It’s not.”

Boli’s loss of innocence—as his initial belief that bad things happen to other people grows into the knowledge that there is no redemption, no miracle that will quickly disappear the violence, corruption and destruction all around—echoes the real situation in Mexico and much of Latin America. As with life in the region, there is no happy ending. After the last horrible murder, readers will see that the battle between good and evil truly exists, and the devil’s fire will continue to rage for a long time coming.

The secondary characters are real people as well: Abuela, who, in her mind, is able to return to the beauty of Veracruz; Boli’s no-nonsense sister, Gaby, who takes over the family’s panadería in their parents’ absence and whose business decisions reflect the trajectory of the town’s downfall; Jesusa, the Flores family’s maid, who knows the dual reality of soul-numbing poverty and terror; the beautiful Ximena, who, along with several other young women, throws in her cards with the gangsters; Boli’s best friend and alter-ego, Mosca, who suddenly disappears; and, of course, Father Gregorio and the police chief, Pineda, whose salaried job descriptions include pacifying the populace.

Both dialogue and narration are peppered with rough-and-tumble Mexican street-Spanish in all its permutations, and there’s a helpful glossary as well. Note to teachers: This is how boys and men in small-town Mexico—and in some cities as well—speak. Anything less would be a cultural erasure.

Make no mistake: Playing for the Devil’s Fire is not “just” about what is often referred to as the “drug wars.” Indeed, readers will not find the terms, “narcos,” “gangsters,” or “drugs” anywhere here; nor will they find “government complicity” or “colonialism,” either. Rather, what they will find is real people in a particular small town in a particular Latin American country—who have become collateral damage in a violent, murderous game of international dominoes—and for whom the message is: Sal si puede. Pack up your dreams if you have any left and get the hell out while you can.

This is what readers here, in the belly of the beast, need to see and understand. Playing for the Devil’s Fire is highly recommended.