It Doesn’t Have To Be This Way: A Barrio Story / No tiene que ser así: Una historia del barrio 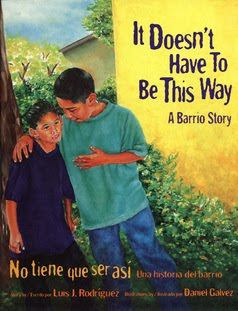 Poet, novelist, educator, and activist, Luis J. Rodríguez, has been writing from his own experiences for more than 30 years. His beautiful picture book, La llaman América // América Is Her Name (Curbstone, 1997) was one of the first to focus on racism, immigration and migration from the voices and hearts of the people themselves.

It Doesn’t Have To Be This Way: A Barrio Story / No tiene que ser así: Una historia del barrio is narrated by 10-year-old Monchi, who’s being recruited by a local gang. Monchi becomes enamored of Clever, who is both engaging and intimidating. Both Monchi’s insightful and supportive uncle, Rogelio, and the child’s slightly older cousin, Dreamer, advise him not to take this road, but Clever’s pull is stronger.

Rodríguez knows firsthand why young people join gangs: “to belong, to be cared for, and to be embraced.” In an introduction that includes a photo of himself as a gang member at age 11, he writes,“I hope we can create a community that fulfills these longings, so young people won’t have to sacrifice their lives to be loved and valued in this world.”

It Doesn’t Have To Be This Way is Rodriguez’s envisioning of what his own childhood could have been had he not been seduced into becoming part of this dysfunctional, violent world.

Renowned mural artist Daniel Galvez’s compelling watercolor paintings, on a palette of vibrant floral colors and tones, beautifully express the East LA barrio and the people who live there. On the copyright page, Galvez thanks the adults and fifth-grade students who appear as characters in this story. Tío Rojelio is iconic artist Juan Fuentes, who has a gallery named after him at Acción Latina on 24th Street in the Mission District of San Francisco. The character who buys the bike that Monchi has stolen is René Yañez, who recently passed away. He was one of the founders of the Galería de la Raza and himself a Mission icon.

Leading with the Spanish text on some pages and the English on others—along with some phrases in Mexican street Spanish woven into both the Spanish and English—reveals the community’s bilingualism.

Alarcón’s Spanish version is filled with his usual strong images and deep magical symbolism, as does Galvez’s art.

Clever, the gang recruiter, brings to mind Edward James Olmos’ character, “El Pachuco,” in Luis Valdez’s Zoot Suit. He is omnipresent, often lurking in the background. He is the evil who is there but not there, the one who follows the neighborhood, whispering in everyone’s ear. His presence is always there because he permeates the barrio, foreshadowing evil: watching Monchi from afar, giving him bad advice, inviting him to a jump-in, showing him how a gangsta dresses, encouraging him to steal a bike, noting his reaction to his cousin’s being shot, and observing his encounter with a cop. Practically the only scenes here that do not include Clever are when Monchi is with his family, especially with his uncle. The message is strong: Kids who live in the barrio must understand that they have to learn to be careful.

Monchi’s slightly older cousin, Dreamer, is Clever’s counterpoint—she’s the angel on Monchi’s shoulder. When we meet her, she’s fixing a loose board on the porch, and, mocking him as “medio tonto” after he’s tripped over a rock, pretends to hit her own head with the hammer. Although she appears to be joking with Monchi, she’s implying that he has the capacity to make the right choices, but he will still make mistakes along the way. Later, despite her being dissed by Clever, Dreamer tries to convince Monchi not to join the gang. When that doesn’t work, she takes a bullet for him. Kids who live in the barrio must understand that they have to learn to be careful.

Rodríguez’s story of the barrio brings in the same Chicano subtext that Luis Valdez captured in Zoot Suit—the strong history of rural East LA of the 1960s that goes back to Sleepy Lagoon and the so-called “Zoot Suit Riots” in 1943 which spawned the movie—to incorporate the neighborhood and the gangs.

Young Monchi is the poet Luis J. Rodríguez and, ultimately, his story is about resisting the strong pull of the gangs. In a particular illustration, Clever confronts Monchi, who is holding a notebook in which he’s been writing his poems. And Monchi, terrified, nonetheless is meeting Clever’s eyes.

The rich symbolism continues throughout. In Monchi’s encounter with a cop after Dreamer has been shot, for instance, the illustration indicates that he is answering the cop’s questions reluctantly if at all. Readers see the policeman looming from behind, his arm close to the gun at his waist. Monchi, his arms at his side, looks directly up at him—while Clever stands a few feet away, but nobody sees him.

In another illustration, after Monchi has stolen and sold a bike, he purchases a knife. This knife comes from the outside world, and Monchi brings it inside and puts it on the table where Dreamer can see it. Mom is preparing food in the kitchen, her back turned to them, but her worried expression says that she, like everyone else, knows what’s going on.

Ultimately, it’s the violent event that almost takes Dreamer’s life—rather than anyone’s pleading with him—that convinces Monchi to get out before it’s too late.

In the hospital, Monchi is filled with grief and guilt, And the boy’s uncle is there to support him: “Esto no tiene que ser así, m’ijo,” he says. “Sé que quieres ser un hombre, pero tienes que decidir qué clase de hombre quieres ser.” (“It doesn’t have to be this way, my son. I know you want to be a man, but you have to decide what kind of man you want to be.”)

Rogelio is proud of Monchi's decision, and tells him that “nosotros podemos mejorar las cosas, m’ijo, si todos trabajamos juntos” (“we can make things better, my son, if we all work together”).

My comadre, Judy Zalazar Drummond, told me that she used Monchi’s story in San Francisco middle schools for many years in discussions about making positive and negative choices. It Doesn’t Have To Be This Way: A Barrio Story / No tiene que ser así: Una historia del barrio is highly recommended.

Although this story is highly recommended, the Spanish text is more nuanced and subtly different from the English. The result is, that in English, it tends to diminish Monchi’s autonomy and sense of self. I suspect that this flattening in the English language was an editorial choice, and I’d like to see an updated edition with the subtlety and message of the language restored.

• Describing an encounter with Clever, Monchi tells readers (in English) “I tried to sound cool, but I was scared.” And in Spanish, Monchi says that he was “trying to look calm, but the truth is that this vato scared me.” In the English, Monchi is blaming himself for being scared, while in the Spanish, he acknowledges the source of his fear.

• After Dreamer’s near encounter with death, Monchi tells his tío that he has decided not to join the gang. Rogelio responds: “Ésa fue uno decisión valiente…. Y te respeto mucho por eso.” Monchi’s uncle uses the empowering term, “decisión,” acknowledging both the decision itself and that the youngster is learning to make positive choices. In the English text, however, Rogelio tells Monchi that he did “a brave thing,” which implies that it may have been something he was compelled to do, rather than his choice. Here, the use of the word “thing” rather than “decision” deemphasizes Monchi’s developing self-awareness.

• In the end, Rogelio tells Monchi that: “Nosotros podemos mejorar las cosas, m’ijo, si todos trabajamos juntos.” (“We can make things better, my son, if we all work together.”) Spanish readers see advice that comes from Rogelio’s experience and struggle—while English readers see Rogelio telling Monchi that “we can make good things happen, m’ijo, if we all work together.” Using the passive term here—“happen”—minimizes the community’s task ahead and Monchi’s role in it.