¡Vamos! Let’s Go to the Market 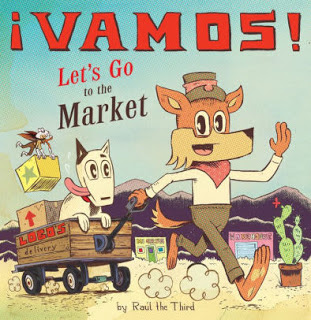 After many years of immersing himself in the traditional Chicano art of doodling with Bic® pens on Nescafé®-stained grocery bags, the third Raúl in his family has taken the plunge.

In ¡Vamos! Let’s Go to the Market, Raúl the Third (also known as Raúl Gonzalez) takes his readers on a totally trippy, frantically-paced journey through an enormous Mexican market whose inspiration was the Mercado Cuauhtémoc in Juárez.

Raúl the Third’s artwork, rendered in ink on smooth plate Bristol board; and Elaine Bay’s digital dry-color palette and photo collage, feature lots of desert tones and complement the brightness of the market as well.

Sharp-eyed older readers will see a combination of history and modern times, the silliness of El Chavo del Ocho and MAD Magazine, the speed of Monty Python’s Flying Circus, and the mayhem of a telenovela. Meanwhile, children (both hablantes and English-speakers) will follow the frenetic action while they learn new words and phrases, and reveal to each other the many visual jokes and punchlines. They will also count the appearances of favorite characters: “Where’s Waldo” fans, for instance, will love “¿Dónde está Coco Rocho?” (the tiny, winged, four-armed, two-legged, cape-wearing cucaracha in the white hat).

After being awakened by Kooky Dooky the rooster (who happens to be wearing a large sunrise belt buckle to remind him of his job), Little Lobo and his dog, Bernabé, and their tiny friend, Coco Rocho, eat a desayuno of huevos rancheros con tortillas de maíz and wash it down with warm milk. The huevos could not be fresher—a happy-to-please hen is nesting next to the oven, keeping her eggs warm.

Now, it’s time to load up their wagon to deliver supplies to the market. Everything is neatly labeled in Spanish with its English translation right below: Little Lobo’s house reads “mi casa,” the wooden box on which Coco Rocho sits is marked, “caja,” and a carton of miscellaneous stuff is tagged “cosas.” And the fun begins!

As Little Lobo, Bernabé and Coco Rocho navigate the double-page full-bleed spreads on their way to the market and inside, adults will also find not-so-hidden gems of word-plays and visual details. In one, for instance, next to a truck depicting workers unloading cases of buñuelos, the three encounter a poster for the film, “Un Perro Andaluz” playing at the Buñuel Cinema. 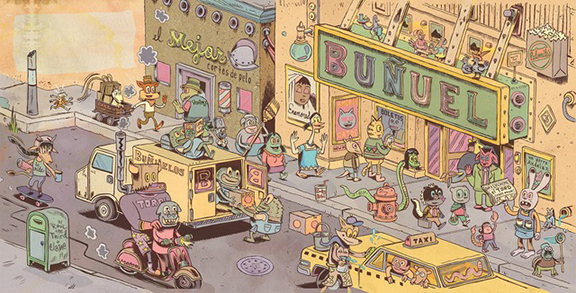 Meanwhile, la Chida rolls by “El Mejor cortes de pelo,” whose logo is the helmet of Spanish conquistador Hernán Cortés; a group of palomitas wait to be seated at Palomita’s restaurant (on the roof of the theater), where they will dine on (of course) popcorn; and the iconic Sapo Bell in the Lowriders series has morphed into Sapo the trucker, taking his lunch break while reading “Sapo at Work.”

Young readers who don’t already know will find that the worst thing that could possibly happen to a luchador (who must never show his face) is to lose his mask. It’s so tragic that the headline, “el TORO loses mask!” makes the front page of the Daily Chisme. Here, youngsters will see Little Lobo’s hero with a paper bag on his head, riding a motorcycle, walking around the plaza, bending a steel pipe with his bare hands, and finally, procuring a brand-new mask so he can fight again! ¡Guau!

In the plaza and inside the market—¡Guau!—everyone is busy! The Mercado is a virtual maze of pathways, shops and booths. There are mariachis, bailadores folklóricos, and everything anyone could possibly want: herbs, medicines and candles; delicious foods and snacks; comic books, magazines and sombreros; hand-made piñatas and hand-carved masks (including one of our little friend, Coco Rocho); black velvet paintings of Emiliano Zapata, Tweety Bird, La Catrina, Elvis and the ever-popular touristy “Aztec sacrifice”; marionettes of Frida Kahlo, Diego Rivera and Cantinflas; Día de los Muertos papel picado, and a line of tourists waiting to take a photo on “Chiva’s Zonkey,” a donkey she’s painted with zebra stripes. Saving the best for last, Little Lobo visits his favorite shop: Lucha Libre masks, posters and toys, and a revista that shows El Toro in his full glory, ready to get back in the ring. Here, Little Lobo delivers golden laces to tie onto El Toro’s new mask! And meets the great El Toro himself! And gives him a ride home! ¡Guau!

In ¡Vamos! Let’s Go to the Market, Raúl the Third, who won the Pura Belpré award in 2017 for illustrating Lowriders to the Center of the Earth (written by Cathy Camper), infuses his hilarious stream-of-consciousness doodling with virtually hundreds of little details (such as an anthropomorphic spider catching flies with a spiderweb fishnet).

The Spanish and English words and phrases complement each other. Although an appended glossary translates most of the Spanish words into English, youngsters will easily be able to decode from context what they don’t already know. This peek into Mexican culture is rich with beautifully laid-out detail and the kind of humor that will appeal to both the youngest hablantes and English-speakers—and to adult readers as well. ¡Vamos! Let’s Go to the Market is highly recommended.

One of my favorite illustrations is the Piñatas Caminos section, in which Little Lobo delivers the tissue paper that Corrina Caminos needs to finish her piñatas. Her selection of piñatas for sale includes a giant El Monstruo and El Toro, a taxicab with driver (“La Ruta”), and (readers will remember from the Lowriders books) an El Sapo (the icon from Sapo Bell), an El Chavo del Ocho and a Flapjack Octopus.

Hey, wait! Is that a piñata of “our” orange-faced, Mexican-hating Donald J. Trump, glaring at a piñata of Cantinflas, the goofy-but-sly Mexican character who always manages to bamboozle the rich and powerful? Why, yes, yes it is. 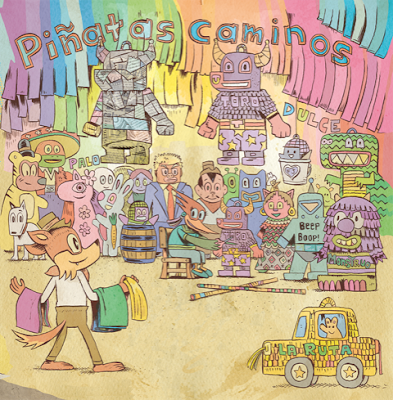 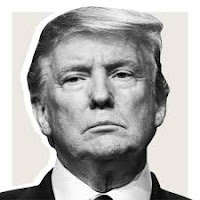 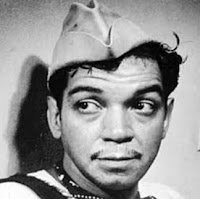