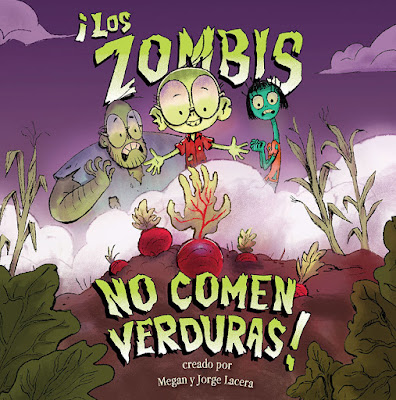 In the latest series of Kraft Foods TV commercials, non-Zombie parents who insist that their children eat nutritious foods chase them around the room or verbally battle with them—until discovering that offering them macaroni and cheese solves everyone’s problem.

Ineffectual parenting
notwithstanding, the point is that just about all families want their children to be healthy. Although their definitions of “healthy” might be different from those of the rest of ours, Zombie families want the best for their kids, too.

In Zombies Don’t Eat Veggies! and its Spanish version, ¡Los zombis no comen verduras!, young Zombie Mauricio (“Mo”) Romero cannot and will not abide his parents’ cultural food preferences. Among them are—yum!—arroz con spleens, chili con ojo, dori-toes, and arm-panadas. No, Mo is different. He has a secret, “deep, dark, dreadful, devious” craving for something “absolutely despicable”—horrors!—vegetables. Vegetables of all kinds!

Mo earnestly attempts to convince his parents to integrate vegetables into their Zombie culinary world. First, he presents them with the stomach-churning (to them) book, Eating Vegetables by "Jonathan Saffron Gore," a Zombie tongue-in-cheek reference to Eating Animals, in which author Jonathan Safran Foer challenges readers to examine their eating habits. 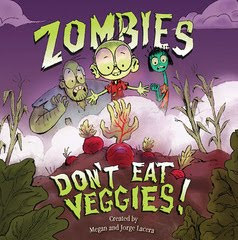 When that argument fails, what Mo secretly concocts for his parents—with ingredients from his hidden veggie garden and prepared in his secret kitchen—is too good to divulge. (OK, it’s a delicious vegetarian gazpacho disguised as a delicious bloody mess, which he calls “blood bile bisque.”) Although Mo’s ploy is a bust—his Zombie parents hate the gazpacho—they know they must support their young Zombie son because they are a Zombie family and they love him beyond death.

Megan Lacera fills her tale with hilariously exaggerated puns (Mo’s mom offers him a bowl of delicious “finger foods,” and Mo begs his parents to “give peas a chance”), which Jorge Lacera complements with over-the-top cartoon images on a Zombie-centric palette of mostly darkened browns and greens. Here, for instance, young readers will see Mo and Mom proudly gazing at Dad, who displays his first-place trophy in the much-(Zombie)-coveted “competitive brain-eating contest.”

Lacera’s digitally rendered illustrations, in which the individuals in this Zombie family have varying complexions—Dad is brown, Mom is dark green, and Mo is light green—authentically reflect the multiethnic reality of the Zombie community. Plus, they’re very, very funny. 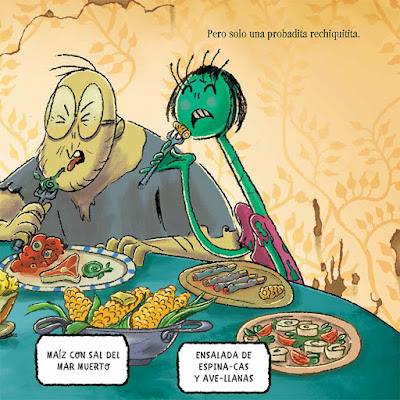 While the English version contains appropriate conversational code-switching, super-talented translator Yanitzia Canetti’s Spanish version not only reflects the cultural nuances of the spoken language, but effortlessly blends in spot-on Zombiana, which she has apparently studied. While Mom hopefully presents Mo with a bowl full of (literal) “finger foods,” the Spanish might be “comida de dedos.” But Canetti refers to it as “deditos en salsa” (literally, “little fingers in sauce”). She also adds or subtracts words or word parts to Zombify the Spanish, creating delightful names for the foods to reflect an unmistakable Zombie-centric flavor. For instance, she uses a hyphen to morph “patatas” (potatoes) into “pata-tas,” with “pata,” of course, meaning “foot.” As well, she employs Espanglish phrases in a way that will have young hablantes giggling. For instance, when Mo’s parents hesitantly agree to try his vegetarian dishes, an illustration shows them grimacing and taking (in English) “only a teeny tiny bit,” while in Espanglish, it’s “una probadita rechiquitita” (“a tiny retch-inducing taste”).

Hablantes and English-speakers—Zombies and non-Zombies alike—will love this well-done and totally silly story of the meaning of family, yearning to belong and daring to be different. And non-Zombie kids will see connections to their own lives as well. Zombies Don’t Eat Veggies! and ¡Los zombis no comen verduras! are highly recommended.