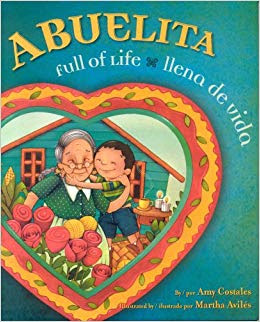 Move over, everyone! Abuelita’s come to stay! Aquí viene, de Mexico, with two small suitcases and a lot of love, bringing something new and wonderful into her grandchildren’s lives. Although there’s a little hesitation at first, there’s no conflict as Abuelita gently, energetically and happily transforms a typically “American” mom, dad, and two children into a bilingual, bicultural extended family.

She’s “too old” to speak English, she says, but Abuelita and an English-speaking bus driver get along just fine. Meanwhile, young José starts to like the way the Spanish words feel in his mouth and expertly performs some tongue-twisters for his little sister: “tres tristes tigres.”

In Abuelita Full of Life / Abuelita llena de vida, Cosales and Avilés wisely and hilariously show young readers and listeners what it’s like to embrace the everyday joys of having an exuberant, life-loving elder move in with her younger relatives. Together, the spare and rhythmic text in Spanish and English “shows,” rather than “tells,” and the gorgeous illustrations and book design support the story rather than overpower it, and beautifully demonstrate love and respect for elders and children.

It’s an awesome, stereotype-busting bilingual blend of story, art, and design that shows love of family members for each other and the wisdom that elders can share with younger family members. 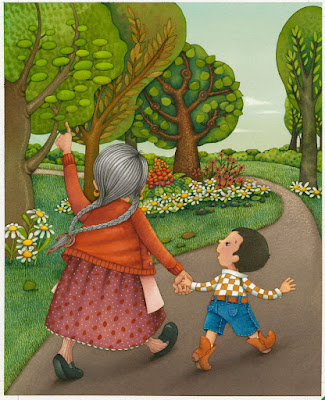 In beautifully crafting this loving story of a joyous grandma’s arriving home to her family and community, Costales and Avilés gently push back against familiar tropes about age and disability, creating an abuelita who’s, por supuesto, llena de vida.

Young readers will notice small details on every page. Here is Abuelita, bending over with her legs spread out, harvesting pole beans and straightening their poles; children will see a smiling caterpillar, ladybugs and a dragonfly or two. Here is José, in his soccer uniform—with no room left in the yard to kick the ball around—happily munching on an ear of fresh corn while using his fútbol as a seat.

The first in a series of four full-page illustrations shows three ladybugs and a bespectacled Abuelita in a field of green cornstalks. A few pages later, Abuelita and the ladybugs are smiling at the ripening corn. In the third image, her basket is filled with corn and, in the final one, it’s heavy with corn, tomatoes, squash, chiles, and beans—and, holding a bunch of roses he’s picked, José shows up to help Abuelita take home the harvest, while the ladybugs watch.

In each of these spreads, Abuelita’s long, neatly plaited hair extends onto the next page, where it becomes two braids, a design element that divides the English text from the Spanish. At the center of the page to its margin, the braids reconnect with a loosely tied string whose color matches Abuelita’s dress. By seeing the interweaving of two languages to make meaning, youngest readers will encounter the visual symbolism of what it is to be bilingual.

Costales originally conceptualized and wrote this delightful story in a rich, playful Mexican dialect (“va bien rápido” rather than “va muy rápido,” “andar en bici” rather than “montar en bicicleta,” and “se sienta bien callada” rather than “se sienta en silencio”), which she then translated into captivating, rhythmic English. And Avilés’ stunning, super-bright, super-saturated acrylic artwork—full of Mexican blue-greens and cinnamons, with lots of reds and gold tones, and roses everywhere—brings Abuelita and her family and culture forward with particularly Mexican visual humor and sentiment.

Filled with love and joy and laughter, these two languages—words and pictures—talk to each other, going back and forth across the border. Together, author’s and artist’s repetitive and fun styles will especially appeal to young hablantes and their teachers, as well as to English-speaking youngsters who want to learn Spanish.

Without a hint of moralism or condescension, Abuelita is a beautifully told and gorgeously illustrated story accessible to very young children—hablantes and English-speakers alike—that models respect for both elders and youngsters.