Note from the editor

As readers of DE COLORES know, for ten years we have been evaluating children’s, middle grade and young adult books by and about Latinx peoples. Our reviews and essays highlight the best and call attention to the bad and the ugly. We are expanding our vision and posting a review essay by David Bowles, a friend and colleague, about Jeanine Cummins’ American Dirt, which was published today. In the past few days, this title has garnered an unusually large amount of positive reviews from the professional review journals and sites and may well be nominated for several major awards. Now, in the “Era of Trump” we need to continue the larger national dialogue. American Dirt is, as David writes, “harmful, appropriating, inaccurate, trauma-porn melodrama,” including damaging racist tropes about Mexican immigrants, refugees and asylum seekers. We see it as our responsibility to help stop the speeding train. American Dirt should continue to be discussed deeply and should not be rewarded for its racism thinly disguised as literature. 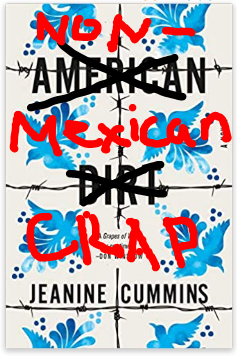 If you haven’t already, you’re going to be hearing a lot of praise for Jeanine Cummins’ American Dirt, a novel about a Mexican bookseller who has to escape cartel-related violence with her son, fleeing to the US. Cummins received a seven-figure advance for this book.

Let me start with the obvious: Cummins has never lived even within five hundred miles of Mexico or the border. In fact, until very recently, she didn’t lay claim to the Latinx heritage that comes to her through a Puerto Rican grandmother. Just five years ago, she was calling herself white.

Latina or no, Cummins certainly isn’t Mexican or Chicana. That’s a problem.

If you don’t know this, Mexican writers are horribly underpaid. Women writers in Mexico, more so. And Chicanx authors suffer marginalization in the US market. As a Mexican American writer, I have seen my Chicana and Mexicana colleagues struggle to get their stories told, to get their manuscripts into the hands of agents and past the publishing industry’s gatekeepers.

While I have nothing against Jeanine’s (or anyone else’s) writing a book about the plight of Mexican women and immigrants (especially if they do their homework and don’t exoticize our culture), I am deeply bothered that this non-#OwnVoices novel has been anointed the book about the issue for 2020 (with a seven-figure advance, no less) with glowing reviews from major newspapers and the support of big names in US publishing.

Such reception is especially harmful because authentic stories by Mexicanas and Chicanas are either passed over or published to significantly less fanfare (and for much less money). There’s been strong pushback, especially Myriam Gurba’s masterful take-down of the book (that magazines refused to publish) and Parul Sehgal’s examination of how the book “flounders and fails.”

Author Daniel Peña characterizes the book in stark terms: “lab-created brown trauma built for the white gaze and white book clubs to give a textural experience to people who need to feel something to avoid doing anything and from the safety of their chair.”

US readers would be much better off diving into one of the many books on immigration by actual Chicanx and Mexican writers that already exist. I mean, Cummins sure as hell did:

“My research started with reading everything Luis Alberto Urrea ever wrote. Then I read everything else I could find about contemporary Mexico and by contemporary Mexican writers. Then I read everything I could find about migration. Sonia Nazario’s Enrique’s Journey is magnificent. So is The Beast by the Salvadoran writer Óscar Martínez.” (from her Shelf Awareness interview: https://www.shelf-awareness.com/max-issue.html?issue=352#m743)

And American Dirt leans heavily into that source material. I don’t mean word-for-word plagiarism. Instead, the novel features scenes / elements from articles, novels and social media posts by Mexicans and Chicanx writers. Sometimes, ironically, Cummins depicts things that no longer exist (because she’s ripped them from older works).

You see, even after reading existing works, Jeanine Cummins still apparently felt she needed to write about the plight of Mexican immigrants. Ostensibly, however, she was conflicted and nervous.

On the one hand, she admits to Alexandra Alter of the New York Times: “I don’t know if I’m the right person to tell this story.” And in the afterword of her book, she worries that “privilege would make [her] blind to certain truths,” wishing that someone “slightly browner than [her] would write it.”

But on the other hand … she still wrote it. After talking to various Mexicans on the border, this was her response: “Every single person I met made me more and more determined to write this book.” Cummins was concerned, she claims, that people at the border were being depicted as a “brown, faceless mass.” She wanted to give them a face. To be their white savior.

Of course, she conveniently forgot about the very #OwnVoices books she had mined for ideas and cultural texture.

In the midst of this literary amnesia, she decided to make millions off the pain and struggle of women from a completely different culture.

Her response to the criticism? She tells Alter, “I do think that the conversation about cultural appropriation is incredibly important, but I also think that there is a danger sometimes of going too far toward silencing people.”

When we criticize her, in other words, we’re the bad guys.

In addition to laying claim now to a Latina identity, she also cites her marriage to a formerly undocumented man as credentials for telling this story. Of course, her husband is from Ireland. Not a lot of Irish folks in camps or cages, last I checked. I daresay Trump would go easier on—nay, welcome—such immigrants.

Why does her identity even matter? Because she gets nearly everything wrong as a result.

For example, Cummins screws up Spanish egregiously (especially nuances in Mexican Spanish). First, when depicting Spanish-language dialogue as English, she sprinkles it with Spanish words, which is ridiculous (“Hola, abuela” is just “Hello, Grandma,” in English, not “Hello, Abuela,” as Cummins prefers). Even if we accept this as poetic license to add cultural texture, she does it poorly, never using Mexican Spanish terms, just sterile, standard ones. If you’re going to add spice, make it chile, Jeanine. “Maldita sea” could be “chingada madre,” for example. “Horseshit” could be “pendejadas” (as David Schmidt points out in an upcoming negative review) and “bogeyman” should be “cucu” or “cucuy” (as Myriam Gurba clarifies).

Actual examples of Spanish are wooden and odd, as if generated by Google Translate and then smoothed slightly by a line editor. Take this note from Lydia’s husband for example:

(There is blood on your hands as well. I’m sorry for your pain and mine. Now we are bound forever in this grief. I never imagined this chapter for us. But do not worry, Queen of my Soul—your suffering will be brief.)

The Spanish is … not idiomatic at all.

Cultural references are often missed, and Lydia Quixano Pérez (what a name, huh?) is ignorant of things that any Mexican knows. Take this exchange about the bad guy, an elegant cartel leader:

“I know you don’t like to think of it like this, but at the end of the day, these guys are businessmen, and this one is smarter than most.” He put his arm around her. “He’s not your typical narco. In a different life, he could’ve been Bill Gates or something. An entrepreneur.”

“Great,” she said, threading one arm across his midsection and resting her head on his chest. “Maybe he should run for mayor.”

“I think he’s more of a chamber of commerce kinda guy.” Sebastián laughed, but Lydia couldn’t. They were quiet for a moment, and then Sebastián said, “La Lechuza.”

Now she was able to laugh. “Are you serious?” She sat up to look him in the face, to determine if he was messing with her. Sometimes he fed her nonsense just to test how gullible she was. This time, his face was innocent. “The Owl? That’s a terrible name!” She laughed again. “Owls aren’t scary.”

A “lechuza” is a screech owl. They have been feared throughout Mexico for literally thousands of years, considered harbingers of death, witches in disguise. Lydia’s reaction is that of the white readers, not actual Mexicans. And this is just one of literally dozens of examples.

People are stereotypes in this novel, participating in stereotypical activities (quinceañeras, for example). They live in a flattened pastiche version of Mexico, a dark hellhole of the sort Trump rails against, geographically and culturally indistinct. Lydia and Luca—despite having money—escape to the precious freedom of the US aboard La Bestia (that dangerous, crime-infested train) because of course they do. But they don’t suffer the maiming, abuse, theft, and rape so common on that gang-controlled artery to the border. 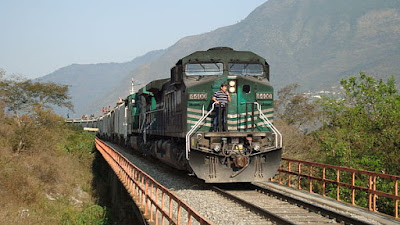 And the characters. Gah. I am close friends with people from all social classes in Mexico, including light-skinned, middle-class, book-loving women like the protagonist ostensibly is. But none of the peculiarities of those lives and experiences make their way into this novel.

Instead, Lydia and Luca feel like a white US mother and her son, with nominally Mexican names slapped on, sprinkled with a bit of lime and salt. They could easily appear in a Gillian Flynn novel with little adjustment at all. Furthermore, Cummins clearly wants us to be startled at how “erudite” and “elegant” some of the males are.

“OMG! Really?” I imagine some US reader gasping. “In Mexico? Aren’t all men uncouth swarthy beasts?”

And frankly, I’ve barely scratched the surface here. Setting aside the melodramatic plot and mediocre writing, there is so much more to say, especially about how this book (which the editor characterizes as “a portrait of a nation and a people under siege”) does little to explore the complicity of the US in the violence wracking Mexico. In avoiding politics, Cummins ends up implicitly blaming the victim.

Hopefully in the weeks and months to come, others will join their critical voices to the small group of us making a stand, exploring other problematic elements of this dangerous work.

Let me be clear: because American Dirt contains multiple inaccuracies and distortions, the white US readership in particular will come away with a stylized understanding of the issues from a melodramatic bit of literary pulp that frankly appears to have been drafted with their tastes in mind (rather than the authentic voices of Mexicanas and Chicanas).

Ah, and there’s the rub. White folks and other non-Mexican Americans in the US: you cannot judge for yourselves whether American Dirt is authentic. You’re going to have to trust Mexicans and Chicanx folks. I know that runs counter to the upbringing of so many. I know it defies our national discourse.

At a time when Mexico and the Mexican American community are reviled in this country as they haven’t been in decades, to elevate this inauthentic book written by someone outside our community is to slap our collective face.

To close, here’s a poem I wrote in Nahuatl (an Indigenous language of Mexico) in protest:

Our community (especially Mexican Americans on the border) has never been heard when we bow to faux civility and respectability politics. Indeed, it makes us “faceless,” as Cummins asserts. Voiceless. Needing a savior.

People who hate us won’t be swayed by our politeness, anyway.

You have to scream your right to exist. You won’t be heard otherwise.