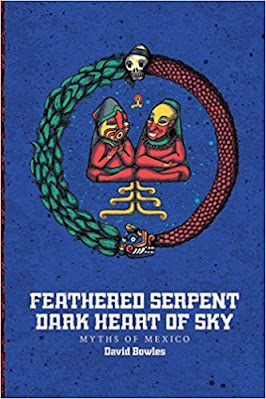 In the US schools, Mexican history and the cultures and belief systems of the Indigenous peoples of Mesoamerica—if taught at all—are generally relegated to a paragraph or two, and fraught with egregious historical and cultural erasures. Here’s a typical example:

Quetzalcoatl was a deity-king, kind-hearted (he didn’t believe in human sacrifice) and wise (he was said to have invented the Aztec calendar, books, and writing). The people’s affection for Quetzalcoatl made the rival gods jealous. They acted together to trick him. One day the Evil One went into Quetzalcoatl’s palace holding a mirror. When Quetzalcoatl looked in it, instead of his own reflection, he saw a bearded, long-faced person. He knew that if his people saw him like that, they would be terrified. He had no choice but to leave. He went down to the seashore with his servants and made a raft of serpents. He told his servants that he would leave them, too. The servants wept, but Quetzalcoatl told them not to grieve. He promised that one day he would return and be their king again. Then he sailed away in the direction of the rising sun. (1)

Here is a deconstruction of the paragraph, above:

• His actual name was “Ce-Acatl” (first name, “One Reed”), “Topiltzin” (“our beloved prince,” what the people of Tollan and the rest of the Toltec Empire called him), “Quetzalcoatl” (his title, probably from the Toltecs).

• Quetzalcoatl was Toltec, not Aztec; so, of course, he did not “invent” the “Aztec calendar, books, or writing.”

• There was no rival-god-jealousy or tricking. Throughout the reign of Quetzalcoatl, his twin brother and principle rival, Tezcatlipoca, along with the other priests, had lost power and were angered by the elimination of human sacrifice.

• Calling Tezcatlipoca the “Evil One” is a cultural erasure, since Mesoamerican religions didn’t and don’t pit good versus evil. Rather, the struggle was and is between chaos and order.

• Quetzalcoatl did see his own reflection in the mirror. He had been so dedicated to worship and rule that he had not noticed that he was aging. Understanding himself to be mortal and weak, he worried that people would despise him.

• Before he sailed away “in the direction of the rising sun,” Quetzalcoatl spent years traveling through Mesoamerica, founding new cities, and teaching people respect for the gods and to avoid human sacrifice. Then he left, promising to return.

All this is to say that these traditional stories from Mesoamerica are not simplistic. Unlike European “fairy tales,” they do not pit “good” against “evil.” Rather, they are complex. They are about the struggles between chaos and order—the struggles to find balance.

With Feathered Serpent, Dark Heart of Sky: Myths of Mexico, David Bowles, scholar, historian, linguist, storyteller, Chicano activist—and damn good writer—sets out to correct the record. And he does. All of it. As the well-used idioms go, he pulls no punches and leaves no stone unturned.

On the stunning cover, executed by “LxsDos’” (Christian and Ramon Cardenas, “street artists from El Paso”)—together on a pen-and-ink drawn, digitally colored, textured dark-blue background representing the cosmos, the dark heart of sky—sit the Dual Gods, the complementary halves, Ometeotl. In the Nahua language, they are lovingly called “the grandparents,” each half enjoying the company of its other half. Surrounded by the feathered serpent, Ometeotl dreams “a vast world and multi-tiered sky, peopled with creatures so diverse and wonderful that the very thought of them brought joy to our grandparents’ hearts.”

Lxs Dos created the interior illustrations with pen and ink on paper. They play around with imagery, and each is symbolic of the contents of a chapter and a hint of what is to follow. And they are all gorgeous. In “The Fifth Age and the Reign of Demigods,” for instance, readers will see an Indigenous woman, kneeling over a large metlatl to grind up—not corn, which is an essential life metaphor, but skeletons. Over her right shoulder flits a tiny butterfly and over her left shoulder, a hummingbird hovers. Both are signs of rebirth and life. It is the Fifth Age, remember? “The present era. Our time.” This Indigenous woman—the Divine Mother—is creating, from the old bones, a new and better race of people. 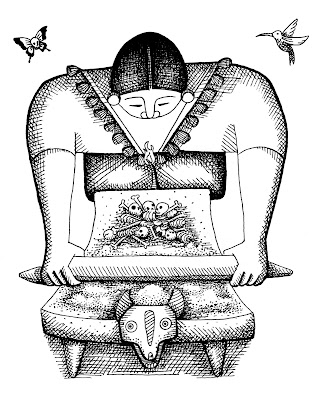 In Feathered Serpent, Dark Heart of Sky, every story is a treasure that younger readers (and adults alike) will enjoy reading and rereading—as each reading becomes a new and exciting experience. Each story in a theme (“The First Three Ages of the World,” “The Fourth Age and the Hero Twins,” “The Fifth Age and the Reign of Demigods,” “The Toltecs and the Rise of Civilization,” “Tales of the Maya,” “Aztecs Ascendant” and finally, “Conquest and Courage”) naturally follows the one before, and each section begins with a thoughtful “convocation”—helpful for adult readers, and accessible to younger readers as well—that introduces the theme and discusses the content. The “convocations,” David Bowles told me, are what he feels thinking about his children and grandchildren down the road, whom he loves so much that he wants these stories to be part of their lives. He imagines himself sitting on a mesquite stump, he said, “sharing stories and songs and trying to be whole.”

Bowles’ renditions of these traditional stories—which he translated from the fragmented oral and written mythologies of “pre-Columbian” Mexico and seamlessly pieced together—will enable readers of today to understand and appreciate both the stories themselves, their contexts, and their places and functions in history.

For instance: In most, if not all, children’s books about “La Llorona,” she is a vain, self-centered (Indigenous) young woman who, after marrying a wealthy Spanish nobleman and bearing two children, finds out that he has been cheating on her. So, in a fit of jealousy and rage, she drowns her children, and from then on, loudly mourns them: “¡Mis hijos!” she screams for eternity, “¡Mis hijos!” And Mexican children of today listen for her at night, and are frightened.

But according to Bowles, there is much more to the story. “Lloronas” were a common occurrence in Nauhua lore, he says. In “The Anguish of Citlalli” (pp. 256-261), the Xoxchimilca woman bravely chose the only option available to her: to surrender her beloved children to the water rather than to surrender them to the horrors of colonialism. Although the Maya held out for a century or so, there was no place for the Nauhua people to go.

In more contemporary history, this is not a unique occurrence, either. The “Llorona” story reminds me of Toni Morrison’s Pulitzer Prize-winning novel, Beloved, in which a family of formerly-enslaved people in Cincinnati is haunted by the ghost of Margaret Garner, who had killed her young daughter and attempted to kill her other children to spare them from being returned to slavery. (2)

Writing a complex yet accessible book such as Feathered Serpent, Dark Heart of Sky must have been a tough thing to accomplish. It involved familiarity with the historia and cuentos of what is now referred to as Mesoamerica, finding the fragments and pulling the translations together—and for each one, folding in the historical and political texture and finding the right voice.

Perhaps most importantly, rather than focusing on the colonizers, the traditional stories here center Indigeneity. “The most we can hope for,” David Bowles told me, “is to center Indigenous lives, especially those stories of women that have not been told. We are heirs to the stories—last convocation.”

“This is work we need to do as a community. We need to bring our history together in affirming ways. Every time there are chaos and destruction, a wave of creation follows. We cannot forget, we cannot allow it to be erased. We need to keep it alive.”

Every school in the Americas, at least, should have copies of Feathered Serpent, Dark Heart of Sky—and teach from it. It’s an invaluable resource, and is highly, highly recommended.

[Note: Muchísimas gracias a mi amigo y colega, David Bowles, por su gran amabilidad y generosidad. I want to thank David Bowles for his kindness, generosity, and dedication to all the grandparents and their children.]