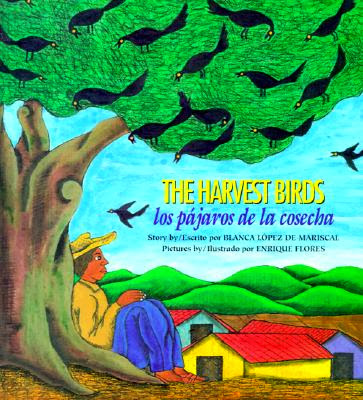 Allegedly based on a folktale from Oaxaca, The Harvest Birds / los pájaros de la cosecha tells the story of a young man named Juan. We don’t know his last name. People call him “Juan Zanate” (not in quotes in the story) because he has a special relationship with zanates (grackles), who “consider him their friend.” He daydreams a lot about having his own land. He also works for the town shopkeepers, yet they mock him because he doesn’t “know anything about making things grow.” So the young man makes a sharecropping deal with an elderly landowner, and a shopkeeper provides him with leftover miscellaneous seeds:

“Juan, sweep up the corn, the beans and the squash seeds from my floor and take them to my pigs. Then, if you wish, you can take some seeds for yourself.”

One of the birds, whom Juan calls “Grajo,” is Juan’s special friend: “There was one bird in particular who cared very much for Juan and wanted him to find his way in life.” The birds, in unison, advise Juan to “plant weeds on the borders” of the land, but Juan’s planting corn, beans and squash together appears to be an accident.

And, the story of the Three Sisters—corn, beans and squash—is told in many ways, to provide actual ecological and scientific knowledge, which this story, of course, doesn’t. Rather, this heavy-handed moral from Juan:

“The zanates taught me that all plants are like brothers and sisters… If you separate them, they become sad and won’t grow. But if you respect them and leave them together, they will grow happily and be content.”

Actually, all plants do not grow well together; some plants overwhelm others. People need to know which plants grow successfully together and why. In oral stories, seeds would not be planted together so that the plants could be happy—“happiness” is not a characteristic given to plants.

The art, probably rendered in watercolor and ink on a brightly colored palette, is unappealing. The characters’ faces are often expressionless and inconsistent—sometimes Juan appears to be a young man and sometimes he appears much older.

Had it been written in the form of an oral story, with lessons hinted at but unstated, The Harvest Birds would have been richer and more exciting.  As it stands, it’s didactic and boring and not recommended.