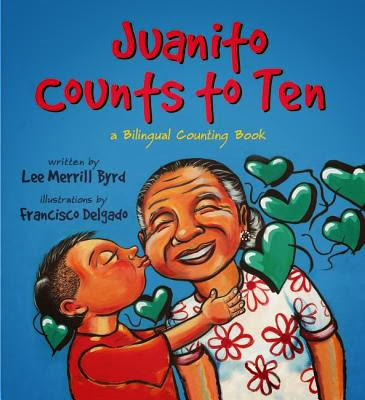 It’s so sweet to count kisses! Narrated by Juanito’s grandma, the simple little story is about who receives Juanito’s delicious kisses. Beginning with one little kiss for his big sister, two big kisses for his daddy, three wet ones for his momma, and, as he counts to nine, Abuelita’s worrying that he might have run out of kisses. But—of course not—he has ten delicious ones for her!

Who would think of a counting book that is so loving, so family-oriented, so delightful? Clearly, Juanito Counts to Ten is not just about counting. And, while “traditional” counting books usually count just the objects, this one actually describes each kiss. With appropriate idiomatic Spanish, Juanito Counts to Ten is language expansion at its best.

Delgado’s artwork, in rich, saturated oils, complements the loving, enthusiastic text and carries the emotions. Big sister is grossed out, Beatriz’s dog is jealous—and the cat’s not especially loving it, either. Here, he portrays Juanito’s family, friends and everyone else he kisses (but not girls outside of the family, whom he wants to but doesn’t) as real Mestizo people and community. And one of the messages—an important one—is that it’s totally OK for Latino boys to kiss their close friends and relatives. Highly recommended.