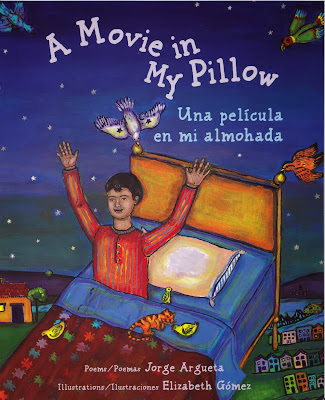 During the bloody Salvadoran Civil War (1979-1992) between the military government representing the 12-family oligarchy of wealthy landowners, and leftist forces representing mostly impoverished peasants, US-supported government death squads terrorized, tortured, murdered and disappeared thousands of civilians, especially targeting students, intellectuals, and Indian people in the rural areas. By the time the UN-brokered peace agreement was signed, it’s estimated that more than 75,000 people had been killed and more than half a million refugees had fled to the US.

In this lovely bilingual collection of autobiographical poems, young Jorge tells the story of how he and his father, fleeing from the war, arrive in San Francisco. Eventually, the rest of the family will join them, but for now, father and son, leaving in the middle of the night—and without saying goodbye to anyone—must travel alone.

In an introductory note, Argueta writes about the beauty of his home country and the war that forced his family to leave. “These poems are my memories, my dreams,” he writes, “the movies in my pillow.” This brief history of his “transplantation” reminds me of the stories my grandmother told me about having to leave Mexico with her brother packed into a trunk so he would not be taken to become a soldier. Although my grandmother always longed for the homeland of her childhood, still she embraced this country for the safety it provided. Like my grandmother was, young Jorge is also resilient. While holding tight to the memories of his homeland, he is able to put down roots in San Francisco with its “sopa de lenguas en el viento / soup of languages in the wind.”

When his uncle sends him an audiotape of his grandma, talking and singing to him in Nahuatl and Spanish, we know that Jorge, wherever he is, will always remain connected to his culture and community:

Jorge, Jorge, maybe
you will never come back.
Remember when you sat
next to me on the river bank?
Jorge, Jorge, don’t forget
that in Nahuatl “tetl”
means “stone” and “niyollotl”
means “my heart.”

Argueta’s writing—both in Spanish and English—are pure poetry, with brilliant metaphors that will resonate with young children. On one page, for instance, he is a yo-yo, and his poem is a long unpunctuated sentence:

Gómez’s brightly colored acrylics beautifully illustrate Argueta’s beautiful poems. She has a lot to work with: Here is Jorge, avoiding cobras on the sidewalk; riding a dragon dancing the cumbia; with his family flying like parakeets between San Francisco and El Salvador; and turning into a yo-yo. One of my favorites is the image of Jorge’s family members, embracing each other in a huge nest—“abrazando nos sentimos como un gran nido con todos los pájaros adentro.”

The Spanish is wonderful, depicting Jorge’s struggle and emotions of his abrupt immigration to San Francisco; the translation was most likely accomplished from Spanish to English. I especially like the way the Spanish and English versions alternate on each spread, with both languages presented as equal in importance.

In A Movie in My Pillow / Una película en mi almohada, Argueta gives young readers insight into the one of the most difficult experiences a child can have—being uprooted from your homeland and transplanted far away to a very different place. For young Jorge, landing in “la misión” provides him with a world of adventures and enough cultural connections to El Salvador to make his transition a little less traumatic than if he had landed somewhere else. This book is a welcome addition to a collection of stories about the immigrant experience and is highly recommended.