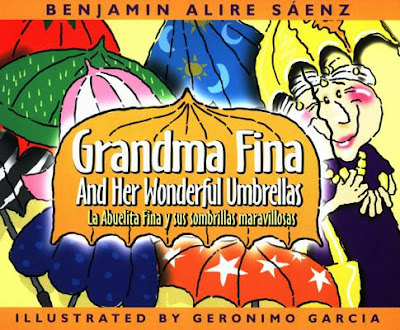 Grandma Fina just loves her tattered old yellow umbrella that keeps her cool on warm sunny days. As she walks through the community and chats with each of her neighbors, no one says anything about Grandma Fina’s umbrella because no one wants to hurt her feelings. But everyone’s thinking the same thing. Then, when her relatives and neighbors throw her a surprise birthday celebration, Grandma Fina receives—nine new umbrellas! Still favoring her old yellow umbrella, Grandma Fina takes the others to the community center and gifts them to her friends.

Garcia’s cartoon illustrations, on a bright palette of mostly purples, greens, oranges and yellows, complement the story and add to its hilarity. And young readers and listeners will enjoy matching the umbrellas to their respective donors and trying to find the bluebird on practically every other page.

Herrera’s idiomatic Spanish translation follows the English text in simplicity, repetition and rhythm; allowing both hablantes and English speakers to enjoy the story. Each two-page spread contains blocks of English text in black print and Spanish in green. On two pages in the predominantly English blocks where Grandma Fina talks with her daughter, their endearments are appropriately in Spanish, the translation of which can be inferred.

As a read-aloud, this solid bilingual early reader—with its predictable plot and hilarious ending—will encourage youngsters to explore colors, friendships, relationships, neighbors, the meaning of “community,” and a host of other topics. I can see a teacher stopping every few seconds so that the children can yell, “Wonderful!” or “¡Maravilloso!”—the word that connects the ebullient Grandma Fina with the story and each of her neighbors.

In a society in which the mass media portray everything as disposable and old people as useless as torn umbrellas, Grandma Fina And Her Wonderful Umbrellas / La Abuelita Fina y sus sombrillas maravillosas is a refreshing replacement. Highly recommended.