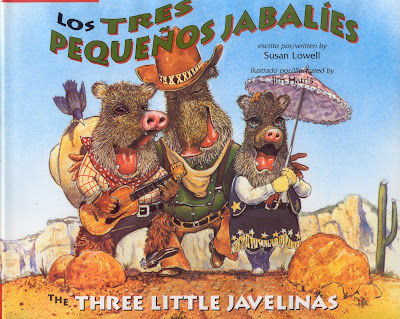 In transporting the “Three Little Pigs” story from Europe to the American Southwest, “where Native American, Mexican, and Anglo cultures blend together,” Lowell morphs the pigs into javelinas and recasts the big bad wolf as Coyote.

Trotting away to seek their fortunes (mama isn’t even around to wave goodbye), the first little porker builds his house out of tumbleweeds and the second relies on somewhat stronger saguaro ribs. The hungry four-legged pursuer, of course, huffs and puffs and easily destroys both domiciles, and the piglets find refuge with their sister, who has resourcefully built her house out of sturdy adobe bricks. No one gets killed, no one even gets seriously hurt, the javelinas live happily ever after and Coyote is left to howl at night.

Harris’s artwork, executed in watercolor, gouache, and colored pencils on bristol board, uses an earth-toned palette that reflects the colors of the desert. As well, you can see practically every stiff, bristly hair on the cowboy-clad piglets, as well as the black-tipped guard hairs and narrow muzzle on skinny Coyote.

But rather than enhancing the story by moving its locale and inserting elements of Southwestern flora, fauna, and material culture, Lowell’s contrived literary treatment, including pronunciation prompts, disrupts the rhythm and confuses the story (italics below mine).

The second little javelina walked for miles among giant cactus plants called saguaros (sa-WA-ros). They held their ripe red fruit high in the sky. But they made almost no shade, and the little javelina grew hot.

Then he came upon a Native American woman who was gathering sticks from inside a dried-up cactus. She planned to use these long sticks, called saguaro ribs, to knock down the sweet cactus fruit.

The second little javelina said, “Please, may I have some sticks to build a house?”

“Ha’u,” (ha-ou) she said, which means “yes” in the language of the Desert People.

I’m baffled by the Spanish translation, which seems neither literal nor idiomatically authentic. The piglets’ refrain, “Not by the hairs of my chinny-chin-chin!” for instance, comes out as “¡Ni por las cerdas de mi bar-bar-barilla!” which means nothing. Some of the translations don’t quite connect, either. For example, “(The giant cactus plants) held their red, ripe fruit high in the sky” becomes “los gigantescos cactus saguaros que mostraban orgullosos sus frutas rojas,” which would translate as “the giant saguaros cactuses that proudly displayed their red fruit.” And, there are outright mistakes. When one of the piglets asks a brick-maker for “a few bricks” to construct her house, he responds:

“Si,” answered the man, which means “yes” in Spanish, the brick-maker’s language.

Well-told folk tales, even the most outlandish ones, have a “magical realism” that requires a suspension of disbelief. Children know, for instance, that javelinas don’t really dress in human clothes, speak English (or Spanish), leave their mothers and go out to “seek their fortunes.” At the same time, children allow themselves to believe, for the purposes of this story, that a javelina could build a particular kind of house in order to outwit a single-mindedly hungry coyote.

Lowell’s adding elements to the story that reflect the cultures of the Southwest—while leaving intact the story’s essential European underpinning—throws a “cultural blanket” over the European folktale. To try to attach so much specificity about peoples and their material cultures—without the cultural knowledge—makes it even harder for a story to work.

Then along came a coyote. He ran through the desert so quickly and so quietly that he was almost invisible. In fact, this was only one of Coyote’s many magical tricks.

Coyote is not just a trickster. Coyote is a religious/spiritual Being, a cultural icon who demands respect. There is always the knowledge—a cultural backdrop from the teller to the audience and back—of who Coyote is and what Coyote represents. Without this depth of comprehension and cultural understanding, Coyote becomes a buffoon—a big bad wolf turned into a “trickster” who gets his comeuppance from a trio of young pigs. When you take an important part of someone’s spiritual and cultural heritage without acknowledging it, it’s called “cultural appropriation” and it’s never OK.