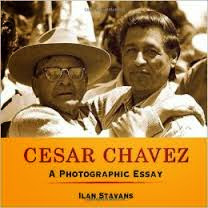 “We draw our strength from the very despair in which we have been forced to live,” César Chávez once said. “We shall endure.”

In the evocative cover photo, César and an elder agricultural worker embrace each other. As both look directly into the camera, the elder’s right arm rests on César’s right shoulder, while César’s right hand supports the elder. Reflected in the elder’s eyeglasses are the images of agricultural workers and supporters holding signs and banners of protest. In this excellent photographic essay, carefully selected black-and-white archival photos combine with honest and accessible text to present for middle readers the story of the life and struggles of a courageous person—and the people who struggled with him.

In his introduction, Stavans is clear and to the point: “Chavez needs to be re-introduced to the young,” he writes, “as a model in the larger fight against poverty and corporate abuse. It is crucial to reinstate him to the rightful place he deserves in United States history: as both a voice for and a champion of the oppressed.” Although the tactics of non-violent resistance of such leaders as Mahatma Gandhi and Martin Luther King, Jr., became César’s trademark, his heroes also included Emiliano Zapata and other Mexican revolutionaries. Indeed, César was an agricultural worker, and a local, national, and international leader as well.

At the same time, he is not an icon and was far from a superhero. Rather, César was a humble person, a common man of la gente who, together with activists Dolores Huerta, Fred Ross, and other organizers—and with thousands of agricultural workers and supporters—accomplished the all but impossible: they garnered recognition of, and won human and civil rights for, some of the most impoverished and exploited workers in this country.

Most of the black-and-white photos here are from the Farm Workers Archive, many taken by agricultural workers themselves, rather than by professional photographers. These compelling photos have an intimate look that’s reminiscent of a family album.

Some of the photos are, indeed, family snapshots. Here is six-year-old Cesario with his sister on the family farm near Yuma, Arizona. Here is César’s eighth-grade graduation photo, a snapshot of the 17-year-old in the Navy, and César and Helen with six of their own children.

But it’s the agricultural workers and their struggle that are at the heart of this photographic essay. Here is César as a young organizer speaking at a small meeting in what appears to be a classroom in the early 1960s, and at a much larger open-air rally in the 1970s. Here are agricultural workers engaging in the backbreaking labor of gathering melons, harvesting onions, and thinning rows of lettuce. Here is a 1950s photo of workers using the crippling short-handled hoes, which became a symbol of their particular exploitation. And here is a family of striking farm worker parents and children picketing the Gilroy Garlic Festival.

Especially moving are the photos of César breaking his 25-day fast in 1968, during a mass attended by some 8,000 farm workers; and of his 1993 funeral procession in Delano, in which some 40,000 mourners marched.

And although the book is essentially about César Chávez, Stavans would have been remiss had he not included Dolores Huerta. Indeed, there are pages of photos and text here about Dolores, an organizer in her own right, who co-founded the National Farm Workers Association, who led the huge grape boycott and negotiated contracts with the large growers, who campaigned for the 1973 Agricultural Labor Relations Act, and who survived a vicious beating at the hands of the San Francisco police in 1988.

Stavans, who himself emigrated from Mexico, organized the photos semi-chronologically, with the sequence broken whenever necessary to provide visual consistency. The evocative black-and-white photos he chose lend themselves to discussion, not only about the movement, but also about the hard work of the people in the fields—combined, they give a sense of familia, of comunidad, something not often seen in photographic essays.

With an all-inclusive chronology at the end, César Chávez: A Photographic Essay is a must-read for all middle schoolers—not “just” Mexican American students—and an excellent introduction to what it is to be involved in social activism. Highly recommended.

Note: For further research, students can be directed to the United Farm Workers website (http://www.ufw.org/_page.php?menu=research&inc=history/07.html), which contains a wealth of information, including history, key campaigns, victories, photos and worker voices.