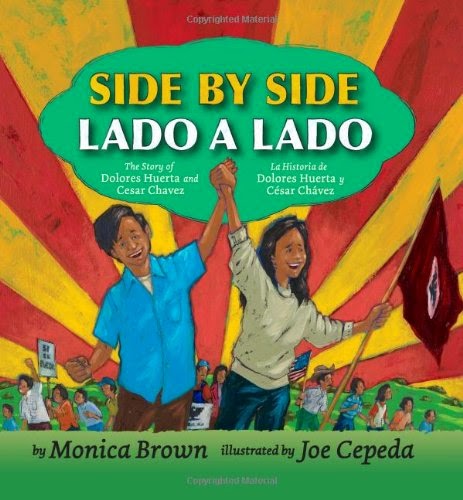 To the best of my knowledge, Side by Side/ Lado a Lado is the only bilingual picture book about the decades-long collaboration between César Chávez and Dolores Huerta, leaders of a labor struggle that organized thousands of the most impoverished workers in the US into an unstoppable force. Indeed, in the 1960s, “¡Sí, se puede!” and “¡Viva la causa!” were battle cries for human rights and social justice.

The story begins with double-page spreads showing Dolores’s story on the left and César’s on the right-hand side. Here, young readers will see how their childhoods differed: Dolores is a talker while César is a listener; Dolores is an activist while César is an agricultural worker; Dolores’s family takes care of others while César’s family’s life is difficult. As adults, Dolores teaches migrant farm worker children while César labors in the fields. When the two meet years later, their life experiences become their organizational and philosophical strengths as they join forces to fight for justice in the fields.

Cepeda’s mixed-media paintings—using oils, acrylics and collage on a bright palette of blues, oranges, yellows, greens and browns—are expressive and dramatic. Here are agricultural workers trying to escape the poisonous fumes of a plane spewing pesticides. Here are Dolores and César together, standing on a flatbed truck, speaking to a few somewhat-interested listeners. Here is César during his 26-day hunger strike, weakly looking out the window, while Dolores rallies the workers. And here is César’s funeral, with thousands of farmworkers and supporters honoring him.

Unfortunately, weaving Dolores’ and César’s stories together in this parallel style sometimes results in inconsistency and oversimplification. For instance, “Dolores saw that Cesar had great faith…Cesar saw that Dolores had great courage.” In fact, both César and Dolores had great faith and great courage. Another problem is that a major struggle—perhaps one of the most famous United Farm Worker struggles—is described here inaccurately. On a spread depicting an organizing meeting, the text reads:


Cesar and Dolores asked people to stop buying grapes from California because the poisons the growers used there were making the workers sick. People listened, and the grapes rotted on the vines. The farmworkers won! They got a safer place to work, and the grapes became safer for people to eat.

Here, the Delano strike, boycott, and secondary strike against California growers of table grapes—a massive struggle that lasted for five years—is collapsed into what appears to be one meeting. On the following spread, which depicts the 340-mile march from Delano to Sacramento, the text says that the purpose of the march was “to demand that workers get paid enough to live on.” But this famous march, in fact, occurred during the grape boycott, not after it was over, and it encompassed many demands, not just one.

Nevertheless, Side by Side is one of the few picture books that demonstrate that César Chávez did not work alone and that Dolores Huerta was more than a political sidekick. Along with Carmen T. Bernier-Grand’s César: ¡Sí, se puede! / Yes, We can!, Kathleen Krull’s Harvesting Hope: The Story of Cesar Chavez, and Sarah Warren’s Dolores Huerta: A Hero to Migrant Workers, Side by Side / Lado a Lado is a valuable addition to a collection of picture books that bring the courageous struggles of migrant agricultural workers to an early elementary audience. Recommended.