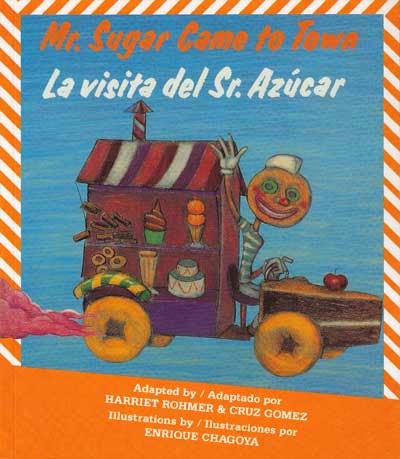 About 25 years ago, I taught afterschool classes for migrant children through the Santa Clara County Office of Education. During some of these classes, migrant college students visited and performed puppet plays about the importance of proper nutrition and the dangers of smoking. My children loved the puppet plays, especially because young people who could have been their older sisters and brothers performed the plays. The puppets were kind of magical for the young children, who could see that the puppets were on someone’s hands, yet they were able to suspend disbelief and pay attention to the message. These puppet plays came to mind as I read Mr. Sugar Came to Town.

Mr. Sugar Came to Town is adapted from a puppet play by Cruz Gomez, Bárbara García, Jesus Gaytan and Jeff Steinhardt and produced by the Food and Nutrition Program of the Watsonville, California Rural Health Clinic as part of its outreach program to agricultural workers and their families.

In the book, a character named “Mr. Sugar” arrives in town and quickly gets a young brother and sister addicted to junk food. They get sugar highs and lows, put on a huge amount of weight, and get in trouble in school. Grandma saves the day by pulling off Mr. Sugar’s mask and revealing the ugliness of Mr. Sugar and his junk food. Mr. Sugar disappears “in a cloud of sugar smoke” and the family celebrates: “They ate rice and beans, chiles and meat, fruits and vegetables from the garden.” And Mr. Sugar goes on to try to addict innocent little kids elsewhere.

Since they were performed in the migrant camps, these puppet plays were for whole families to enjoy together. The evil Mr. Sugar, probably cackling as he distributes his addictive substances to the unsuspecting little kids; the children stuffing their faces and blowing up like balloons; grandma’s confronting Mr. Sugar, struggling with him and pulling off his mask to reveal his ugly face—the shows were fun and there were nutrition lessons to supplement them. But reduced to a children’s book, it’s all just blah.

While the intention here is to teach young children about the dangers of eating too much sugar, it’s didactic and exaggerated and doesn’t give the message of moderation or balanced eating.

The problem with food and obesity in this country—and worldwide—is that agribusiness corporations widely advertise junk food, and aim these commercials specifically at young children. And poverty is not a small issue, either: When I was teaching preschool, I visited a parent who told me that she gave her children cookies and milk in the morning because that’s all she was able to afford.

The Spanish, which is not incorrect but is an almost exact literal translation, is blah as well. It doesn’t hold its own as a story; rather, it replicates the humdrum English version. Chagoya’s illustrations, rendered in multicolored pencil and pastel, complement the story as well.

If Mr. Sugar Came to Town / La visita del Sr. Azúcar were accompanied by a puppet show and some curriculum about nutrition education, maybe there would be some value in it. But it’s not and, as such, I cannot recommend it.