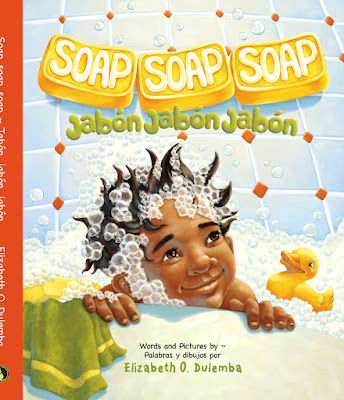 The illustrator of Paco y La Planta de Chile Gigante / Paco and the Giant Chile Plant is back now with her own work. With the same structure as Paco, Soap is a modernized version of the classic “Appalachian Jack” tale written in English with Spanish words peppered throughout and highlighted in red, and primarily featuring Latina/o characters. Also like Paco, Soap is marketed as bilingual, which, of course, it’s not.

Here, Hugo’s mother sends her forgetful child to the market to buy soap. Although the market is only a short walk from his house, he chooses a roundabout path through the playground, down the sidewalk, past a ditch, through the schoolyard into the market. Sort of like the comic strip, “Family Circus.” Along the way he encounters multiple obstacles, neighbors, and misunderstandings, which sometimes lead to violence. Each time, he forgets what he was supposed to buy, but is reminded by something someone says until his next encounter.

Hugo slips and falls into a puddle of mud, his friend also falls into the mud puddle, an elderly neighbor drops her groceries and grabs and scolds Hugo, and a bully hurls him into a ditch. Finally, Hugo gets to the market, purchases the soap, jumps back over the ditch, past his fuming neighbor—still yelling about her groceries—and through the playground to his house. His mother, agape when she sees her stinky, filthy child, marches him to the tub to bathe himself with his newly purchased soap, soap, soap.

Dulemba’s acrylic paintings on a palette of bright oranges, yellows, greens and earthy browns, are inviting; and the story’s premise is silly but appropriate for the age range for which it is intended. However, Soap, Soap, Soap is a tour de force of racial and ethnic stereotypes.

Hugo’s mother appears to be single. Certainly, single mothers exist in all cultures and ethnicities, but it is exasperating to see Latinas consistently cast as women who must raise their children alone. In addition, both women here—Hugo’s mother and the elderly, hotheaded Latina who drops her groceries and remains incensed for what could be hours—are heavyset with prominent derrières. Hugo’s young friend, an African American child, is named “Jellybean,” which is a racial slur for Black people [1]. And, as with Paco, there is not one actual cultural marker in this story [2], and the highlighting of a few Spanish words in red sends a negative and confusing signal to Spanish-speaking children while teaching English-speaking children little of value.

And, although Dulemba’s bright images make it appear that Hugo lives in a cheerful and safe neighborhood, he experiences violence multiple times while trying to run a simple errand for his mother. This plays out like the lives of minority young people growing up in impoverished and violent neighborhoods where at any moment they can get hurt, or worse, just for being at the wrong place at the wrong time.

[1] “Jellybean,” as a name for Black people, is a racial slur that means, “no one likes the black ones.” (Racial Slur Database, www.rsdb.org/slur/jellybean)

[2] The one Spanish expression used here, “Ay, caramba!” more likely befits “Pancho,” the not-so-bright sidekick of the 1950’s “Mexican” TV hero, “The Cisco Kid.” It was also the catch phrase of Bart Simpson.