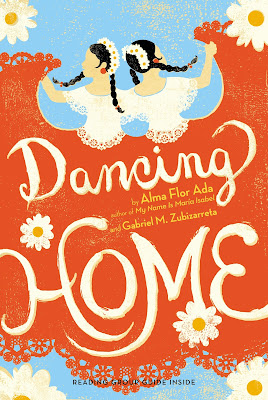 Dancing Home utilizes elements of “A Margarita” (“To Margarita”), a lovely poem penned by the great Nicaraguan poet, Rubén Darío, and skillfully interpreted in English by Rosalma Zubizareta.

In alternating third-person narratives, readers learn the perspectives of fifth-graders Margie, born in Texas of Mexican parents; and Lupe, Margie’s Mexican cousin, newly arrived in the US. Margie, whose voice predominates, is proud to be “American,” does not speak Spanish, and is embarrassed by her cousin’s Mexican ways that seem to invite negative attention.  At the same time, Lupe, whose voice is clearly secondary, does not speak English, knows that her cousin is uncomfortable with her and is embarrassed at not knowing what is expected of her in this new place—“What she really wanted was to crawl under the desk, or better yet, to run all the way back to Mexico.” Meanwhile, Margie, who sees her life as becoming more difficult, is resentful of her parents’ positive relationship with their niece, with whom they communicate in “enthusiastic Spanish.”

In order to portray Lupe as sufficiently grateful that she is here with her “American” relatives, there is a long description of Mexican family life that contains just about every stereotype there is: Lupe’s school is regimented and uninteresting, her family is impoverished, her undocumented father abandons them, her depressed and emotionally distant mother neglects her, and her new stepfather is drunk and abusive.

Yet, as a secondary character, Lupe does not express any particular needs. Rather,

Lupe felt so grateful for this new home she had that she could not bear the thought of her own joy causing anyone else pain. She hoped that Margarita knew that in sharing her own parents, she was not losing anything. If need be, Lupe would find a way to help her see that.

Later, while Margie comes to enjoy speaking Spanish and learning about Mexican foods, dances and holidays, Lupe puts her own interests aside and selflessly adapts:

Having to be constantly moving forward, faster than she could take in all of the new experiences coming her way, was not a good feeling. Yet Lupe smiled. Even bad feelings got better when you understood where they were coming from.

In case readers hadn’t realized that Margie’s voice is more important than Lupe’s, the final chapter practically shouts that the story is, indeed, all about her: “As the poem ended with the poet saying goodbye to the girl to whom he had dedicated the poem, it seemed to Margie as though the words were being addressed directly to her, as though she herself were the Margarita in the poem.”

Lupe’s father reappears towards the end of the story, describing the horrible life of an undocumented worker, “acknowledging his own errors, making a sincere effort to free her from carrying the burden of his own mistakes, and encouraging her to be fully in charge of her own life. Standing before her as a brave and fallible human being, he was doing his best to make amends.”

In one of their many digressions from the story, the authors describe the US Bracero Program in this distorted way:

The program had started when many of the old family farms were bought up by large agricultural enterprises. These new factory farms needed many seasonal workers. Since few people in the United States were willing to do this kind of low-wage work, laws were passed allowing growers to bring men from Mexico to do farmwork in the United States and then return to Mexico.

The reality was that there was no shortage of domestic seasonal workers. Rather, The Bracero Program brought in men from one poverty-stricken group (low-paid Mexican farm workers) to compete against another poverty-stricken group (low-paid domestic farm workers) for the benefit of the agricultural corporations, which greatly profited from the impoverishment and desperation of both groups.

The story lacks subtlety; its messages of acceptance and uniqueness are heavy-handed and didactic, telling young readers what to think rather than showing them how to develop critical thinking skills. Margarita’s acquisition of Spanish and respect for her cultural heritage, and Lupe’s linguistic and cultural adaptation to her new country come all too easily to engage young readers, especially young readers who may have similar issues. Dancing Home is not recommended.