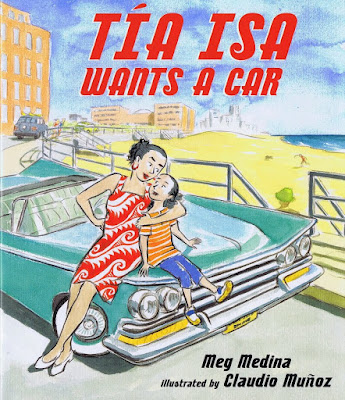 “Tía Isa wants a car.” That’s the refrain on almost every page uttered by our young Latina narrator, who lives with Tía Isa and her brother, Tío Andrés, in a small apartment building in the city. The car she wants is a huge 1950s gas-guzzler with no air conditioning and a bad radio. But it’s un pisicorre “the same shiny green as the ocean that lapped outside my bedroom window,” says Tía Isa. It’s un pisicorre to take them to the beach, and large enough to hold all three plus Mami and Papi when they arrive here from their island home. But Tía Isa, who has a low-paying job and sends “helping money” to the family, has little hope to purchase this “dream car.” This is a close community, however. Neighbors provide odd jobs for the child—stacking oranges in the fruit store, feeding la vieja María’s semi-feral kitties, secretly teaching the librarian some Spanish—and before long, her “secret money sock has grown into a giant money sausage,” with enough to purchase their dream car.

Our narrator, Tía Isa, Tío Andrés, and their neighbors, are familiar people with whom young readers will easily identify. Medina seamlessly incorporates Spanish words and phrases into the story, reflecting the language mix of first-generation English-learners. For instance, Tía Isa says she wants “un pisicorre…to take us to the beach.” When her young niece presents Tía with the money she has saved, Tía “leaves two pink lip marks on my forehead from her besito.” Even their new pisicorre “speaks” Spanish—when Isa revs it up, the “motor cranks with a puff of genie smoke,” and rather than hearing the sound, “vroom, vroom, vroom, vroom” the two hear, “arroz, arroz, arroz, arroz.”

Medina’s vivid imagery—Tía Isa smells of lemon pies from the bakery in which she works, Tío Andrés’s work boots are “muddy like ogre shoes,” the air on Tía’s island smells of "wet palm fronds and mud,” the used car lot smells of tar—provide evocative detail that will engage young readers and listeners. Muñoz’s soft illustrations, in pencil, watercolor and ink, on a subdued palette of tinted pastels, complement the lively imagery of the story itself. I especially like the details of the car, and the expressions on everyone’s faces are priceless. No less importantly, Muñoz’s art mirrors the story rather than extending it, so that both beginning readers and hablantes, perhaps with some help, can easily follow the narrative.

Unfortunately, Medina’s adept and sometimes playful combining of Spanish and English in Tía Isa Wants a Car is not reflected in the Spanish version, Tía Isa Quiere un Carro, which seems to be flattened. Rather than following the code switching of the English version (“Un pisicorre,” she says, “to take us to the beach!”), Martinez-Wells stays exclusively with Spanish (—¡Un pisicorre! ¡Para que nos lleve a la playa!).

In one scene, Tía Isa offers a fistful of dollars to a used car salesman. Her face and body language say that she’s struggling. His arrogant posture says he doesn’t care. The English version reads:

“How much, mister? How much?” Tía Isa repeats in the few English words she knows. She shows him her envelope. “Not enough,” the man tells us again, shaking his head.

And the Spanish version reads:

By using an entirely literal Spanish translation, Martinez-Wells misses the opportunity to show how Tía Isa is both struggling with, and learning, English.

Although the struggles of immigrant families to reunify often have a lot in common, the issues of various immigrant, migrant and refugee groups—depending on countries of origin, histories, politics, and social and cultural dynamics—can be vastly different from each other. Although it’s not explicitly stated, it’s clear that Tía Isa Wants a Car is situated in the Cuban-American community in Miami, and the family’s “island home” is Cuba. I think it’s important that young readers—and even very young listeners—encounter stories that have specific contexts and settings so that they can be able to deal with the complexities in their own lives, their communities and their schools.

Nevertheless, Tía Isa Wants a Car is an engaging story of hard work and resourcefulness; but most importantly, about love of family, being part of community, and never letting go of your dreams. It’s recommended. Unfortunately, the text of the Spanish version, Tía Isa Quiere un Carro, will not be as appealing to young hablantes.