A Visit to Cuba // Vamos a Cuba 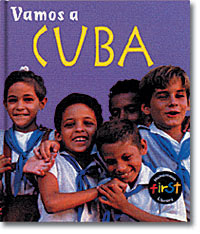 
A Visit to Cuba and Vamos a Cuba are part of Heinemann’s “A Visit to” series of 24 titles, simple overviews that portray the land and people, and especially children, of various countries. As with the others, each page here contains a full-color photo accompanied by a two- or three-sentence description of the land, landmarks, homes, food, clothes, work, transportation, language, school, free time, celebrations, and the arts. Appended are key facts, a glossary and index. In addition, the English version contains a section of Spanish “words you can learn.”

In 2006, a group of vociferously anti-Castro Cubans in Miami objected to the contents of A Visit to Cuba and Vamos a Cuba, complaining that they contained deceptive information and wrongfully painted an idealistic picture of Cuban life. After a politically charged struggle—and against the recommendations of two review committees, the school board’s attorney, and the school system’s Superintendent—the Miami-Dade County School District removed A Visit to Cuba and Vamos a Cuba from school libraries. The ACLU filed a lawsuit, the US Supreme Court refused to hear it, and the board’s decision was upheld. Despite the fact that A Visit to Cuba and Vamos a Cuba were the only books in the series that had received a complaint, all 24 titles were removed from Miami-Dade County’s school libraries. The litigation expenses for the Miami-Dade School District totaled more than $250,000.

It’s worth noting that the Miami Cubans do not represent all Cuban communities in the US. When, how and why families came here are attached to different historical, economic, social and political issues. Many pro-Castro Cubans fled the anti-democratic Batista regime that supported the super-wealthy, organized crime, and US corporations, while impoverishing everyone else. Those who had been allied with Batista, along with others in the middle- and upper classes, fled the new revolution. Many worried families sent their children, who became known as “Pedro Pans,” to be raised by friends and relatives here. Many came for what they believed would be a better life, and, as the revolution progressed, many returned. Some immigrants hate Fidel, others adore him—it’s complicated. But, for the most part, Cuban communities in the US find the extremism of the Miami Cubans exasperating—they appear to be frozen in a time warp.

What infuriated the Miami Cubans about A Visit to Cuba and Vamos a Cuba is not difficult to see. Alongside short, easy-to-read statements—appropriately without political commentary—are clear photos that depict Cuba’s ethnically mixed people. Here is a group of young school children mugging for the camera. Here are children and their parents enjoying an outing. Here are large groups dancing at festivals. And here is what must certainly have enraged the Miami Cubans: joyous adults and children celebrating the Cuban national holiday called “Day of the Rebellion,” the day that marks the attack on the Moncada Army Barracks by Fidel Castro and his small group of revolutionaries on July 26, 1953. The caption simply states: “Cuba’s biggest celebration is called Carnival. It is held July 26. People dance and sing at this festival.”

However, since all of the images are stock photography inexpensively reproduced from Corbis, children will see a limited picture of Cuba. For instance, the photo on the page “homes” shows people walking down the street but not any housing. The page entitled “food” is heartbreaking. Rather than depicting a family enjoying dinner together—or an open-air market that showed the many different kinds of produce—here instead is someone holding a sad little tray of starches. While the “free time” page depicts people playing baseball, Cuba’s national sport; there is no depiction or even mention of anyone playing dominoes, the national game of Cuba. Finally, somewhere in all of the Corbis collection, there must be a beach shot that highlights the amazing turquoise water surrounding the island rather than this one puny little cove.

Unlike George Ancona’s amazing photoessay, Cuban Kids (Cavendish, 2000), many of the photos here don’t do the country justice. But considering that there are few basic—and accurate—introductory picture books about Cuba for early grades, that these depict happy and healthy Cuban children, and that they were the focus of a ridiculous right-wing lawsuit, A Visit to Cuba and Vamos a Cuba are recommended.