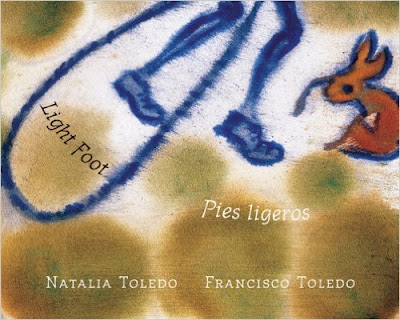 It all began when Death saw that all the humans and animals were having baby after baby but no one was dying, and the world was getting way too crowded. To put an end to this population explosion, Death challenges everyone to a rope-skipping contest and, being immortal, she thinks she is sure to win. One by one, Man, Toad, Monkey, Iguana, Coyote, Rabbit and Alligator keel over, and Death even manages to steal a pair of leather shoes from Man’s body. Then along comes Grasshopper….

Francisco Toledo, one of Mexico’s best-known contemporary Indigenous artists, created a series of engravings of Death skipping rope with the animals, and Natalia Toledo wrote the accompanying story in Zapotec. Interpreted into English by Elisa Amado, the story appears here in Spanish and English.

Young readers will giggle as each animal is enticed into Death’s game; and they will find out why you never hear Death when she comes into a house, and why Grasshopper never did stop jumping. Light Foot / Pies ligeros complements the celebrations of el Día de los Muertos. Highly recommended.