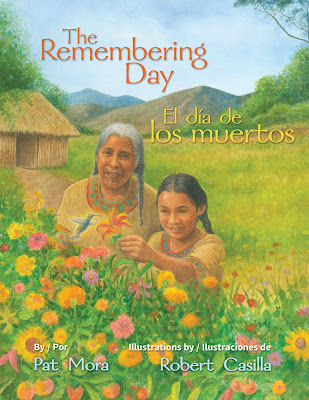 Death, to the ancient Aztec people, was not to be feared. Rather, death was just a part of life, as was the afterlife. A long and beautiful Aztec story describes the perilous four-year journey of the non-living through nine afterworlds—determined by the person’s life and manner of death—before finally reaching the land of the dead. Warriors and those who had been sacrificed, for instance, went to the dwelling place of the sun. Women who had died giving birth were considered warriors as well, and went to the region of the women. Children went to the land of the wet-nurse tree, where they suckled and waited to be reborn. Festivals commemorating the dead were held in different months of the Aztec calendar.[1]

Today, El Día de los Muertos continues to be celebrated in various ways, in Mexican and Central American communities, and in southwestern parts of the US. The celebrations include parades, music, papier-máché skeletons, and candy; and culminate with picnics at the cleaned and decorated gravesites. At home, there are beautiful ofrendas, with photos and flowers, and food items that had been savored by the deceased. All this is not only to remember a particular family’s and community’s dead, but also to entice them back for a visit.[2]

In addition, as my friend and colleague Judy Zalazar Drummond writes, it’s a “healthy alternative to Halloween with its spooks and goblins. The celebration is from Mexico, but reflects death rituals in many other cultures. It shows a healthy worldview where death is not seen as hideous and horrible and to be feared. Instead, it is real and involves real people and their real lives. Day of the Dead also provides a powerful resource to help young people cope with the violence and death in their families and communities. It provides a format for grieving and remembering loved ones that speaks to the continuity and cyclical nature of life.”[3]

In The Remembering Day / El Día de los Muertos, Mora imagines how “this custom of creating a remembering day might have started in the distant past, in a rural village; when indigenous languages and not Spanish or English, were spoken on this hemisphere…” Here, Mamá Alma and her young granddaughter, Bella, do everything together: they play and cook, and they work in the garden growing vegetables and flowers. As the child matures, Mamá Alma teaches her how to weave on the loom, how to cure a sick bird and which herbs to use in healing. The two share memories; towards the end of her life, Mamá Alma tells her granddaughter that “our bodies do not always live forever,” and encourages her to plan an annual “remembering day.” “Teach others,” she says, “that when we think about the people we love, they are always with us, even though we can’t see them.” After her beloved Mamá Alma has passed on, Bella brings her grandmother’s wishes to the community and, a year later, the first “Remembering Day” occurs.

Casilla’s realistic art, rendered in watercolors and pastels on a bejeweled palette of mostly warm colors, are gorgeous. His models appear to be Zapotec and the Mexican countryside, with its rolling hills, trees, cacti and flowers, appears to be Oaxaca, which is where the story is based. But most of all, I love the details. Here is grandma, imparting knowledge and wisdom to her adoring grandchild. Here’s a hummingbird in several illustrations, including one cradled in Mamá Alma’s hand, allowing Bella to gingerly touch it. Here are the marigolds, which, today as yesterday, are used to lure the dead home. And here are children, sleeping in a hammock, while Bella awakes, serenely accepting her Mamá Alma’s journey.

The Remembering Day / El Día de los Muertos has the feel of a contemporary story about a warm, loving relationship between a Zapotec child and her grandmother, part of a Oaxacan farm family living in a village of small houses with thatched roofs, veggie and flower gardens, and children sleeping in hammocks. But it doesn’t have the feel—nor is it informative of—El Día de los Muertos, the holiday that celebrates the dead and entices them back to visit.

There’s always danger in a “contemporary reimagining” of an origin tale that leaves out the important parts. Here, for instance, the word “died” is mentioned only once, and “muertos,” twice. And “Remembering Day” is not translated as “El Día de los Muertos,” which is much more than a day for remembering one’s own ancestors. It’s a large, symbolic, community holiday, steeped in both Indigenous, and later, merged European (Catholic) traditions that welcomes the change of the seasons; and welcomes and honors visits from the community’s dead.

Instead of Mora’s crafting this fictionalized origin of an important death ritual, I’d rather have seen a story of how this particular girl came to understand this particular ritual. As a contemporary story about a grandmother’s aging and transition in a Zapotec family and community, The Remembering Day / El Día de los Muertos would have been highly recommended. But, despite the title in Spanish and this family’s “remembering day” tradition, it’s not about the “first” Día de los Muertos, and cannot be recommended as such.

(Great thanks to Judy Zalazar Drummond, and I’d like to acknowledge the life and work of my multitalented colleague, Bobbie Salinas, whom I imagine is joyfully carousing with her friends in the Land of the Dead.)


[1] This information is from Bobbi Salinas’s beautiful book, Indo-Hispanic Folk Art Traditions II: The Day of the Dead and other year-round activities (Piñata Publications, 1988). It’s out of print, but worth a search.

[2] There are many good children’s books available, specifically about or complementing El Día de los Muertos. Some of them are: Days of the Dead by Kathryn Lasky (Hyperion, 1994), The Festival of Bones / El Festival de las Calaveras (The Little Bitty Book for the Day of the Dead) by Luis San Vicente (Cinco Puntos, 2002), Funny Bones: Posada and His Day of the Dead Calaveras by Duncan Tonatiuh (Abrams, 2015), Just in Case: A Trickster Tale and Spanish Alphabet Book by Yuyi Morales (Roaring Brook, 2008), Just a Minute: A Trickster Tale and Counting Book by Yuyi Morales (Chronicle, 2003), Light Foot / Pies ligeros by Natalia and Francisco Toledo (Groundwood, 2007), Mi Familia Calaca / My Skeleton Family by Cynthia Weil (Cinco Puntos, 2013), My Aunt Otila’s Spirits / Los Espíritus de mi Tía Otilia by Richard García (Children’s  Book Press / Lee & Low, 1986), and Pablo Remembers: The Fiesta of the Day of the Dead by George Ancona (Lothrop, 1997).