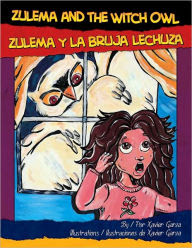 All societies have ways of socializing and disciplining their children; in many cultures, parents and grandparents teach moral lessons with monster stories that scare children into behaving. The Mexican version is, “Portate bien o te lleva el Cucuy”—“Behave yourself or the Cucuy will steal you away.” Mexican and Mexican American kids living in the border towns love Cucuy stories, which are among the scariest.

Pues, Zulema’s mother has had it with this kid, to the point where she’s forced to call in the big guns—90-year-old Grandma Sabina is coming to live with them. Grandma is far from a pushover, and Zulema’s nasty, beyond disrespectful attitude doesn’t faze her. But when Zulema mocks Grandma’s appearance and scoffs at her warning about the Witch Owl’s coming to take away children who don’t mind their elders—that’s the last straw. It’s time to take action, the kind of totally scary action that will force Zulema to mend her ways. Instantly.

Garza’s darkened palette of thickly brushed acrylic-on-paper art presents anime-like characters with huge eyes and over-the-top expressions that complement his eerie story. Full bleeds show three frightened children running from the Witch Owl; the terrified Zulema—as the gigantic Bruja Lechuza envelops her—helplessly screaming for help with no one to rescue her; and finally, the suddenly reformed little girl—holding a large white feather—recognizing who Grandma really is. Garza also incorporates little hints throughout—such as Grandma’s eyes, her owl-headed cane, and her wing-shaped rebozo—and my favorites: the dual-language dividers, in which Grandma actually transforms from image to image.

Between Garza’s storytelling and art, and Villarroel’s excellent translation, this is as close as youngsters—both hablantes and English readers—will get to being inside a story. Zulema and the Witch Owl / Zulema y la Bruja Lechuza is creepy and predictable—no subtlety here—and young readers will want to return to and share it over and over. It’s highly recommended.