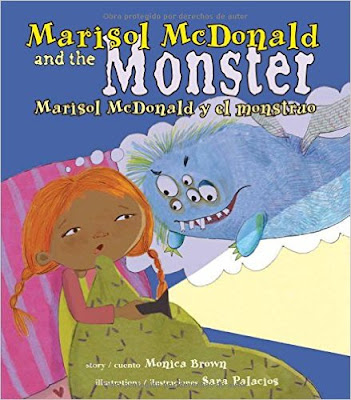 Marisol McDonald, for those who may have forgotten, is mismatched and marvelous, unique, different, and one of a kind. In Marisol McDonald and the Monster, our young Peruvian Scottish American narrator reveals that her favorite letter is “m.” She loves almost all things that begin with “m.” In Spanish and English, her favorite foods are mangoes, melocotones, and milk with miel; and her other favorite “m” words include magic, mustard, moon, monkey, mami, maíz, and magnífico. But the one “m” word that Marisol doesn’t like, at all, ever, in any way, is monster. In fact, she is so afraid of monsters that she keeps her family members up all night until she can fall asleep.

The many “monster-under-the-bed” picture books are primarily for children who sleep alone, and the parents are the ones who solve the problem. What’s unique about this story is that Marisol has agency—she figures out the problem and works it through. I would have expected no less of this resourceful little girl.

How our young narrator takes control is delightfully, marvelously, uniquely, differently and totally, Marisol. With Mami’s help and her “big and great and wild imagination,” she gathers markers, colorful yarn, old soccer socks, and whatever else she can find and makes her own three-legged sock monster who is “unique, different, and one of a kind”:

I dress her in a purple polka-dot skirt and a green striped shirt. I sew on three legs so she will be extra good at soccer. And I give her red hair, just like me, and blue fingernails!

So, while there’s still a monster under the bed, she’s Marisol’s own monster. Her name is “Melody,” or “Melodía” (of course), and it seems that she’s also scared to be by herself.

Palacios’ bright, colorful artwork, rendered in ink, marker, crayon, and cut paper, then digitally enhanced, engagingly balances the well-spaced text, which falls on solid-color or white backgrounds. Her not-so-scary monsters and subtly simple yet detailed illustrations also show what is not explicitly stated. Here, for instance, is Marisol, whose bright red hair matches that of her father and whose complexion is more like her mother’s; while her brothers’ ethnic mixes are shown by their varying complexions and hair colors as well.

In one my favorite double-page spreads, the whole family, exhausted, is slumping on two small living room couches. The boys are practically asleep, dad is yawning, mom is staring into space while holding Marisol’s little brother, and Marisol is trying to stay awake. The only one not in any way affected by their almost-stupor is Kitty the dog, chasing a ball around the room. (And readers who notice Kitty the dog’s exuberance on many of the pages might guess at his connection with the “monster” sounds that frighten our otherwise brave young protagonist.)

Domínguez’s idiomatic and rhythmic Spanish text is both translation and interpretation, so hablantes will enjoy the story as much as English-speaking readers and listeners. Besides having several words and phrases in Spanish italicized in the English text (which is common in some bilingual stories), Dominguez has “flipped” the parallel English words and phrases into the Spanish in a way that feels natural and without missing a beat. In addition, Dominguez uses the fact that plurals in Spanish end in “os” or “as” to add to the rhythm of the text. For instance, while the English reads, “I know monsters aren’t real, but when I think of them, I see scary eyes and wild fur and pointy claws and sharp teeth,” the Spanish reads, “Sé que los monstruos no existen, pero cuando pienso en ellos, me imagino ojos espantosos, cuerpos peludos, garras puntiagudas y dientes filosos.”

This teamwork of author, illustrator and translator have created the third in a series of fast-moving stories in a bilingual picture book format, in which a bicultural (at least), independent, resourceful, confident little girl invites hablantes and English-speakers to join her as she navigates her world. As with the first two titles, Marisol McDonald and the Monster / Marisol McDonald y el monstruo is highly recommended.