Pancho Rabbit and the Coyote: A Migrant’s Tale 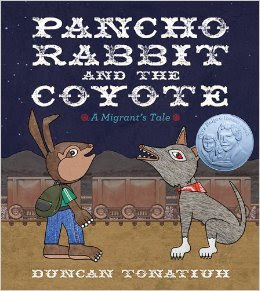 There are far too few picture books for children that depict refugee families or families of undocumented workers in such a way that young children can see reflections of their own lives. Some of the best include Jorge Tetl Argueta and Alfonso Ruano’s Somos como las nubes / We Are Like the Clouds (Groundwood, 2016) and Jaime Buitrago and Rafael Yockteng’s Dos conejos blancos // Two White Rabbits (Groundwood, 2016)—all of which have been previously reviewed here—and one published earlier, Duncan Tonatiuh’s Pancho Rabbit and the Coyote (Abrams, 2013).

While Argueta’s and Buitrago’s stories are achingly beautiful and loaded with symbolism, Tonatiuh’s evocative fable, with familiar animals as characters, lightens the symbolic load a bit. Still, it takes young readers and listeners into an ominous world that forces undocumented migrants to leave their families and communities and risk their lives for a chance to earn enough to survive until the next harvest season, when they will have to cross again. While children of undocumented workers will easily relate to this story, it also builds empathy and invites children who may never have thought about what it is to live these lives to imagine how they might deal with the harrowing circumstances portrayed here.

When the rains do not come, Papá Rabbit, Señor Rooster, Señor Ram and some others from the rancho head out to work the “great carrot and lettuce fields” in El Norte. Several harvests later, they haven’t returned, and Pancho Rabbit, the eldest, is worried. Late at night, he fills his backpack with mole, rice and beans, “a heap of still-warm tortillas, and a jugful of fresh aguamiel” and embarks on a journey to find Papá.

Following the stars north, Pancho meets a coyote who offers to guide him—for a price, some of the food he has packed for Papá. As their dangerous trek continues—atop a moving train, across a river, through a tunnel, and into the scorching desert—the coyote demands more and more food. When it’s gone, the coyote tells Pancho that he is about to become the next meal. But just in time, Papá Rabbit, Señor Rooster, and Señor Ram, who have heard the little one’s cries, come to the rescue. Pancho learns that Papá and the others had been stranded in the desert after being attacked by a gang of crows who took all the money they had earned. And after a long embrace, Pancho guides them home to their joyous families and friends.

Hand-drawn and then digitally collaged illustrations, which Tonatiuh has adapted from the style of the old Mixtec codices, are rendered on a warm palette of mostly flat browns and greens that beautifully frames the story. As well, by incorporating the many textures of fur and feathers, train wheels and gears, cactus spines, denim jeans, canvas backpacks, bandanas, plaid shirts, and borders of papel picado, he brings together the “past” of the codices with the “present” of the Rabbit family’s difficult life. Although the faces are represented in profile, there are expressions. Here are the Rabbit children, holding hands and sadly waving goodbye to Papá Rabbit and his compañeros. Here is Pancho, terrified after losing his balance atop a speeding train. Here are Pancho and the coyote, sweating and panting, about to collapse in the scorching hot desert. And here are Pancho and Papá, joyously hugging each other, while the coyote, his tail between his legs, flees from the fury of Señor Ram and Señor Rooster.

The animals on Pancho’s perilous journey mirror the terrible exploitation that undocumented migrants are forced to endure. The nasty, threatening coyote represents, of course, the human smugglers who extort exorbitant amounts to bring migrants to El Norte (and often take the money and run before reaching the border); the menacing, bribe-taking border guards are appropriately depicted as rattlesnakes; and a “gang of crows” (not depicted) represents the bandits who accost defenseless migrants on the road and take everything they have.

Finally reunited (for now), the Rabbit children try to convince Papá Rabbit not to leave again. But child readers and listeners soon find out that a happy ending is not guaranteed; as in real life, Pancho’s rabbit family does not know what the future holds for them. They can only hope that there’s enough rain for the crops next year.
:
“I don’t want to leave you,” said Papá Rabbit, “but the crows took all our money. If it doesn’t rain enough again this year, and if there is no food or work here on the rancho, what else am I to do? I will have to leave again.”

Pancho Rabbit and the Coyote had an immediate and strong impact on middle-schoolers Amelia Edosia and Maribel Linda, who recognized their own parents in the Rabbit family and themselves in the Rabbit children. This is what they  had to say:

Amelia: “My dad is a migrant. He walked all the way here from Mexico. He told me he walked by himself. Pancho Rabbit and the Coyote makes me think of dad and when he leaves and mom doesn’t know where he is and when he’ll come back. ‘Pancho’ is like my little brother—or all of us."

Maribel: “A lot of Mexican kids would understand this story because they may have parents who are farm workers who work really hard. And sometimes the parents have to go to other places to work and their kids miss them and feel sad.”

Amelia: “Pancho Rabbit and the Coyote is kind of like Two White Rabbits, where the little girl and her dad are traveling to El Norte so he can find work. There are mean-looking coyotes in both stories. Pancho is being used by the coyote: he’s bad, he’s dishonest, and after he takes everything Pancho has, he tries to kill him. It’s obvious that coyotes like to eat rabbits, but in real life, this coyote (the smuggler) would have left Pancho in the desert to die.”

Maribel: “The snakes represent the border patrol: they strike, they have fangs, they can be poisonous. It makes me think about how dangerous it is for my father and what if he didn’t come back. Not a lot of parents always come back.”

Beverly: “A well-deserved Pure Belpré Honor Book, Pancho Rabbit and the Coyote speaks to children of migrant workers as few children’s books do. Along with an extensive author’s note about the difficult lives of migrant workers and the dangers they face, and web-based research and resources for older readers, it’s highly recommended.”

Maribel: “Pancho Rabbit and the Coyote is highly recommended because it teaches Mexican kids what their parents could be going through when they have to leave them to go to work. Respect your parents because you don’t know if they’ll come back.”

Amelia: “Pancho Rabbit and the Coyote is highly recommended because kids who don’t have parents who are migrants will learn how dangerous the lives of migrant farm workers are, and they might learn to care more about other people. And it also helps the Mexican kids feel better.”

Maribel: “And Trump is not gonna finish his wall!”

(Note: For more info about Pancho Rabbit and the Coyote, see this excellent review by Lila Quintero Weaver, in Latinxs in Kid Lit (https://latinosinkidlit.com/2014/03/20/libros-latinos-pancho-rabbit-and-the-coyote-a-migrants-tale-2/). It contains information about the author and a reference to his TED talk, a section about the characteristics of Mixtec art, and teaching suggestions.)