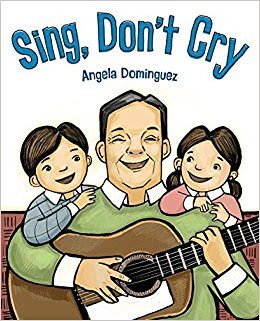 When people think of a “Mexican” song, “Cielito Lindo" is one of the first that comes to mind. It’s a positive song, a unifying song, a song of hope and a new morning.“Cielito Lindo” goes back to the 1880s and remains the single most popular mariachi song in Mexico. In restaurants, mariachis enter singing it, and people stop eating and, swaying back and forth, sing the refrain.

My friend and colleague, Judy Zalazar Drummond, told me that her uncle had been a mariachi, and that “Cielito Lindo” was always the song that brought everyone together. She remembers her mother’s singing it all the time and, in Mexico, “someone always picked up the guitar and played it.” It’s an easy song and was the first song she learned as a child. It’s a pretty song, she told me, and always gave her a good feeling.

Domínguez’s story, she writes, was inspired by the refrain in “Cielito Lindo” and by her mariachi grandfather, who turned to music after a serious childhood accident. She centers this poignant story—narrated by a child who fondly remembers Abuelo and the lessons he taught his grandchildren during his annual visits from Mexico—on the healing powers of song and a positive outlook and love of family and community.

Her artwork—pencil drawings on tissue paper on illustration board, digitally colored in Photoshop—beautifully complements the story’s gentleness. There are two different, both calmly subdued, palettes here: more sepia tones for  “past memories” and slightly brighter, mostly greens, blues, browns and yellows for “present moments.” And I’m impressed as usual by Domínguez’s use of varied skin tones and hair colors, as well as rich details such as bricks on buildings, leaves on trees, a banner of papel picado fluttering in the breeze, the fabric of a couch and balls of yarn in a basket.

Domínguez has made sure that, although she doesn’t center Abuelo’s disability (he probably would not have wanted her to), it’s clear that it changed his life. So, in four illustrations placed throughout, is a story within the story. The first three are rendered in sepia tones, representing the past. Here is a worried mom, standing over her child’s bed. He is in pain. Here is the child, viewed from behind, leaning on crutches and looking out the window. His friends are waving to him, but he can’t go out. Here is a young man, joyfully singing and playing his guitar. A crutch leans against the couch. And finally, in full color, here is an older man—Abuelo—standing up, exuberantly holding his guitar and smiling at his grandchildren. They are hugging him and his arms are open wide in an exchange of love. 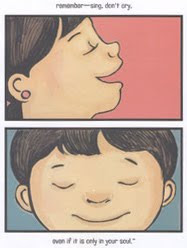 Domínguez’ spare text virtually frames all of her illustrations and hints at their content: “Some things may be lost forever / it’s true.” / “But maybe that makes room / for new and wonderful / things to be found.” This story showing technique cannot help but engage young readers and listeners and encourage them to imagine, and maybe share their own stories.

And finally, there’s this:

“When you are misunderstood,
and when people are unkind,
remember—sing, don’t cry,
even if it is only in your soul.”

There is one problem—and it’s major: Domínguez’s lovely story and beautiful art, informed by a Mexican song, about a Mexican American family with a Mexican abuelo who is a mariachi, was published in an English-only format. It certainly should have been bilingual, and I hope that the next printing will be. In the meanwhile, just as a stopgap, perhaps Domínguez and/or the publisher will insert a translation into each book as it comes off the press. Nevertheless, Sing, Don’t Cry is highly recommended.