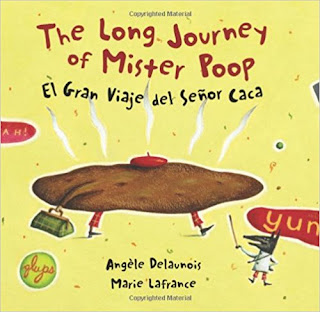 Here, our wolf-guide—sometimes wearing a lab coat and stethoscope, sometimes sporting a chef’s toque, sometimes waving a pointer—takes young readers on a tour of the human body from the inside, pointing out and explaining the bodily processes that transform food into poop. Lafrance’s hilarious pastel illustrations—on a bright palette of mostly yellows, reds, greens and, um, browns—complement Delaunois’ kid-friendly scientific text that even contains the sound effects of digestion! Zolinsky’s Spanish—sometimes placed above and sometimes placed below the English—is a hoot as well.

My young granddaughters (who are excited about reviewing for DE COLORES), middle-schoolers Amelia Edosia and Maribel Linda, couldn’t believe their eyes: A book about poop? Caca? Popó? Really? Maribel laughed because she initially thought that “el gran viaje del Señor Caca” was about “someone named ‘poop’ who was going places.” (The faceless Señor Caca is carrying a satchel and wearing a hat, which is actually a piece of apple core.) And Amelia thought it was funny because “we don’t usually talk about this stuff.”

As they started reading, they saw Doctor Wolf offering an apple to a little girl and telling the teeth to get to work (¡Vamos, dientes! ¡A trabajar!). Maribel noticed that each double-page spread contains both dialogue from Wolf to the little girl, as well as an informative sentence in Spanish and English that explains the particular process. Both reviewers were initially grossed out (“ugh!”) at the illustration of Chef Wolf stirring vegetables in a stomach but began to be impressed at the sight of little enzyme-fishes gobbling up the food and changing its texture. Maribel remarked that “the enzymes turn the food particles into a sort of compost and the stomach is like a compost bin, sucking out the good stuff.”

And now, for the evaluation.

Maribel: “I think this book is good because you learn about things you didn’t know like how your body actually turns food into poop. For example, you eat something and maybe a few days later it comes out and stinks because it’s been up in your body for days and all the good stuff has been sucked out and used. Poop is what your body doesn’t need.

“I think the drawings are very good because young children can look at them and see what’s in their bodies. I like the pictures of Chef Wolf—he’s leading the story like a teacher and a guide leading you on your journey. For instance, he’s in the stomach and he’s got scuba gear, and he’s grocery shopping in the intestines while the blood and organs take what they need.

“I also like that It’s really funny because it’s teaching real things in a cartoon way and textbooks are boring. I understood this stuff when I read about it in a textbook, but that’s because my teacher went over it a hundred times. But I like this one better because I just studied the digestive system and this was easy and fun.”

Amelia: “I like to look at this kind of book because it has information to read and the pictures show me what’s next.

“I learned about digestion, that the stuff you eat has to do with how you feel. We eat healthy because we want to be strong. Our bodies need all this stuff —vitamins and minerals—so we can live healthy. Mom gives us an option—a sandwich or fruit or vegetables, and once in a while, we eat junk like at McDonald’s and then I get a stomachache. I learned to eat healthier and not eat too much junk food.”

Maribel: “I’m on the wrestling team and losing or gaining weight depends on what you eat. You can eat some carbs but mostly you have to eat fruits and vegetables. Some foods make me feel crummy before a wrestling match. I can tell the difference when I eat certain foods. Eating pancakes before wrestling, for instance, doesn’t give me strength, but fruits and vegetables do.”

Amelia: The Long Journey of Mister Poop is highly recommended.

We’re all disappointed that this excellent, funny book is currently out of print, and encourage the publisher to bring it back!