Sleeping With the Light On 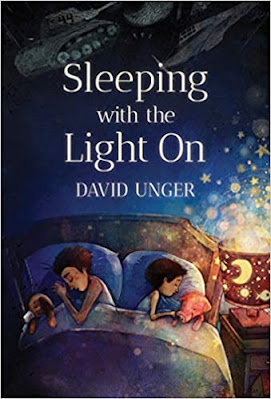 In 1954, bombs rained down on Guatemala in a bloody coup d’etat.This first  covert CIA coup in Latin America overthrew the country’s elected President, Jacobo Árbenz, who had instituted agrarian reforms that gave land to impoverished peasants and ended exploitive labor practices. The coup greatly benefited the US agricultural giant, United Fruit Company, which traded in tropical fruit grown on Latin American plantations. The ensuing 36 years of what came to be known as the “Guatemalan Civil War” (1960-1996) claimed more than 200,000 lives, resulted in more than 45,000 missing, drove countless refugees to Mexico and the US, and wrecked the Guatemalan economy.

For the terrified Guatemalan families, sleeping with the light on became their new normal.

Sleeping with the Light On is based on David Unger’s semi-autobiographical story, “La Casita: Forgetting Spanish,” first published in Spanish by CIDCLI Books in Mexico City (2012). Through the eyes of young Davico, it’s the story of a small Guatemalan family, how they deal with the terror of the unknown, and how the family’s tough choices land them in a new world where no one speaks Spanish, there’s plenty of food, and people sleep with the light off.

Davico, his slightly older brother Felipe, and their parents live on the second floor of La Casita, a small restaurant they are renting in Guatemala City in the early 1950s. Their life is typically middle class and, for Davico, something is always happening. Consuelo, the nanny, takes him to the market and prepares Sunday brunch. Augusto, the cook, and Otto, the waiter, play tricks on him that sometimes make him wet his pants. And Davico is fascinated with the restaurant’s huge glass tank of lobsters, each of whom he names: Don Quixote, Superman, Hannibal, King Arthur, and the largest, Genghis Khan. One by one, the lobsters disappear and are replaced. All but Genghis Khan.

Suddenly, Davico’s family’s lives are interrupted. Airplanes are flying low overhead. Warning leaflets are raining from the sky. Sounds of guns and rifles are going off. Armies and tanks are filling the streets. Blackouts are taking place every evening. Davico’s and Felipe’s parents know exactly what is happening. They’ve survived “this nonsense” all before, in Germany. “This nonsense,” of course, is their child-friendly euphemism for the Nazi conflagration that the world had to end so those who survived could once again sleep with the lights off. 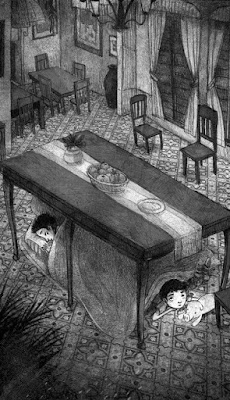 And because Davico’s family—along with thousands of others—recognizes this “nonsense,” they decide it may be time to pack up and leave everyone and everything they and their children know and love. As the boys bed down with their stuffed animals under the big wooden dining room table, Davico hears his parents whispering plans to go to “gringo-land.” The children will stay with an uncle while their parents take an airplane to this strange place to find work.

When Davico goes downstairs to say goodbye to the lobsters, the tank has been drained and “all the lobsters are gone, including Genghis Kahn.”

“I should ask what happened to him,” Davico thinks, “but I don’t. Maybe someone bought him and ate him. I don’t want to know.”

While their parents are gone, Davico and Felipe stay with relatives. “We are in jail,” he says.

We can walk around, but we can’t escape. We watch tons and tons of television, lots of Bugs Bunny and Elmer Fudd cartoons. But we don’t find them funny anymore.

Finally, the boys board an airplane to reunite with their parents. In Miami, the land is flat. There are no mountains or volcanoes. There are no roscas, espumillas or canillas de leche, the Guatemalan candies Davico loves. There are no black beans, yucca or plantains. The avocados are big and watery. And no one speaks Spanish.

Not to speak Spanish at school.

Not to complain about the food.

And, before long, all he remembers of Spanish is:

Forgetting Spanish. This is what coming to the United States means to me.

Soon, Davico is “fitting in, learning to put ketchup on everything.”

But, of course, he misses his home: “sleeping under the table when the lights go out,” “the blue and yellow papers (the warning leaflets) twirling in the sky and falling into the courtyard,” all the people who worked at La Casita. And he misses “the lobsters in the kitchen, with their warts and their hairy legs. Especially Genghis Kahn.”

Mexican artist Carlos Vélez Aguilera’s cover art—using a combination of watercolors, colored pencils and digital color—is, at first glance, calm. On a peaceful blue background, the boys, clutching their stuffed toy animals, sleep comfortably in their bed. The night table holds a battery lamp with a revolving shade on which “sun, clouds and waves [roll] across the light.” But above the title, astute readers may notice the ghostly images of an armored tank and an airplane in the dark blue sky.

The dark interior art, rendered solely in graphite pencil and black ink, reflect the tone of the story as well. In one especially somber piece, the young brothers are in “bed” under the wooden dining room table. While Felipe is sound asleep, a wide-awake and worried Davico holds on to his little stuffed pig and hesitantly peeks over the blanket. The dining room is meticulous: there’s a chandelier, framed art hangs on the walls, the curtains are open and the carpet is swept, and on the main table sit an untouched bowl of fruit and a vase of flowers.