That Girl on TV Could Be Me!: The Journey of a Latina News Anchor / ¡Yo Podría Ser Esa Chica el la Tele! El Camino de una Noticiera Latina 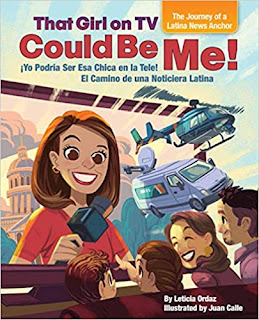 Leticia Ordaz remembers when, as a young girl, she watched the news and began to question why no one on TV looked like her. With encouragement from her hard-working parents—who had left school after the sixth grade in Michoacán, Mexico, to support their families; and later, had immigrated here to give their own children a better life—Leticia begins to imagine that she could realize her dreams and work as a newscaster.

Colombian illustrator Juan Calle’s brightly colored manga-influenced art (which has been trending with young people for years), digitally “painted” in Photoshop, transports the audience into the story. His illustration on the inside front cover, for instance, shows young Leticia, looking out at the reader. She holds a blank notebook and her expression radiates confidence. A sketch of a microphone floats nearby. Young readers know from the beginning that Leticia’s story has a positive ending.

But it’s the images of Leticia’s family’s journey and hard work to encourage their children and give them a good life that especially stand out. In one, the family sits around a tiny dinner table as Papá, in work shirt and cap, tells the children stories about the difficulty of farm labor in Michoacán.

In other images, Leticia tells readers about her timidity, her practicing to read out loud in front of the mirror at home, graduating from high school and enrolling at Sacramento State, breaking into broadcasting through an internship at a local news station, and how her dream career slowly unfolds.

Here is Leticia accompanying reporters to snowstorms, practicing “standups” in rainstorms, covering Cowboy Poetry Day, becoming wrapped up by a snake at a country fair, being attacked by mosquitoes in an almond orchard, and covering the most destructive fire in California’s history. The first in her family to graduate from college, Leticia learns on the job to write, shoot and produce her own stories and on-air interviews. And when her dream job in Bakersfield opens up, she is home!

Ordaz’s non-literal Spanish translation is appealing. It’s the way people actually talk in their own languages. For instance, one of Leticia’s mentors, Lois Hart, tells the astonished young woman (in English):

“This is a tough business, and the starting pay is peanuts. On your first job you’ll have to be a one-man band, carry your own camera, and edit your own stories.”

In Spanish, Lois Hart’s warning is this:

“Este es un negocio difícil y el sueldo inicial es apenas nada. En tú primer trabajo tendrás que hacer todo tú sola, llevar tu propia cámera y editar tus propios reportajes.” (“This is a tough business and the starting salary is hardly anything. In your first job you will have to do everything yourself, bring your own camera and edit your own reports.”)

Of course, Leticia Ordaz’s story is about overcoming obstacles. But, more than this, it’s about knowing who you are, acknowledging what you come from, and—with love and support from family and community—you just might go on to realize your dreams. That Girl on TV Could Be Me!: The Journey of a Latina News Anchor / ¡Yo Podría Ser Esa Chica el la Tele! El Camino de una Noticiera Latina is highly recommended.