Zorro and Quwi, Tales of a Trickster Guinea Pig // Love and Roast Chicken: A Trickster Tale from the Andes Mountains 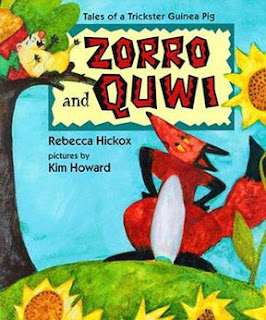 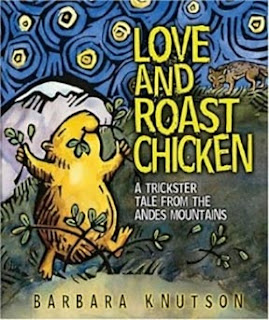 In the Author’s Note for Zorro and Quwi, Hickox writes that she based her children’s book on a cycle of tales called “The Mouse and the Fox,” which she found in Folktales Found Around the World (Univ. of Chicago Press, 1975). She rewrote four of the tales, in which she substituted a guinea pig for the mouse. In Peru, she writes, Quwi is the hero of many trickster tales, although a rabbit or mouse is sometimes used instead. Since I raised guinea pigs as a girl and now have a daughter who raises and shows them through her 4H cavy group, I couldn’t resist making this personable (though perhaps not quite so cunning) little creature the hero.

In the Author’s Note for Love and Roast Chicken, Knutson writes that, in the two years that she and her husband lived in Peru, she “learned many stories, including trickster tales that reminded (her) of the ones (she) knew from Africa.”

A trickster tale tells about a small animal (or a person) who uses brains instead of force to compete against bigger, fiercer characters. In the Andes, the trickster is often a little gray fox, but one story has a guinea pig hero. I have heard and read this tale many times in Spanish—in a lovely, old Bolivian book; from a Peruvian guide in a mountain town; in a Bolivian children’s magazine; and from our friend, Edwin Sulca, a Peruvian weaver. It was never told the same way twice! In this book, I have combined and rearranged my favorite versions.

To reiterate: Hickox switched the “hero” in her stories from a rabbit or a mouse to a guinea pig because she “couldn’t resist making this personable…little creature the hero.” And Knutson switched the “hero” in her story from a “little gray fox” to a guinea pig, and “combined and rearranged (her) favorite versions” of the stories she heard and read.

Here, as in many “trickster stories for children” written and published by cultural outsiders, the authors removed the stories from their cultural contexts and reinterpreted, trimmed and customized particular cultural concepts to fit their needs and those of their perceived child audiences.

A lot of what may currently be called “trickster” tales are actually Indigenous cautionary tales that have been passed down through the generations. Just about every culture has its own “bogeyman” or “cucuy” story to keep kids from misbehaving or wandering off. Children from within the cultures who hear these stories from their elders know, without being specifically told, that something’s up.

For the most part, guinea pigs are prey animals. Their natural instinct is to hide, and they can be very fast. But they are not tricksters.

For authors who are cultural outsiders to read or hear some versions of particular “trickster tales,” take them out of their cultural contexts, keep some parts and toss the others, rearrange the events and mix in a few italicized Spanish words or phrases (such as “bueno,” “mi amigo,” and “¡ay, caramba!”)—and then overlay the values of their own cultural outsider versions onto the specific culture from which the stories originated (e.g., “from the Andes Mountains”)—is the definition of cultural appropriation.

Zorro and Quwi, for instance, begins: “In the mountains of Peru there was once a fox called Zorro…” Children who speak Spanish will know that “zorro” is not the fox’s name—it’s the Spanish word for “fox.” (So, to a Spanish speaker, it would read like, “there was once a fox called fox.”) And “Quwi” is the Quechua word for “guinea pig.” Similarly, Love and Roast Chicken begins, “One day in the high Andes Mountains, Cuy the Guinea Pig was climbing up and down the paths…” Again, “Cuy” is not the guinea pig’s name—it’s the Spanish word for “guinea pig.”

Both characters—“Zorro the Fox” and “Tío Antonio the Fox” resemble Coyote from the old “Coyote and Roadrunner” cartoons, and Cuy / Cuwi, of course, are stand-ins for “Roadrunner.” As well, astute older readers will discern elements of Cuwi’s / Cuy’s tricks in “Brer Rabbit,” “Henny Penny,” “Billy Goats Gruff,” and probably more European tales.

Although the bright, stylized artwork, composition and book design in both titles are vibrant and gorgeous and totally child-friendly, both Zorro and Quwi: Tales of a Trickster Guinea Pig and Love and Roast Chicken: A Trickster Tale From the Andes Mountains embody all the elements of cultural appropriation. They’re not recommended.